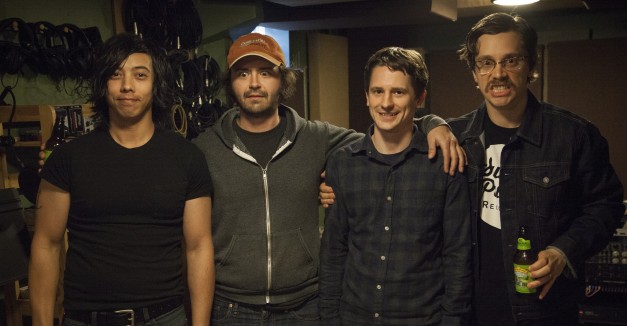 Midway through an evening interview seated at guitarist Bryce Hotz’s Omaha backyard roundtable, the guys in Noah’s Ark Was A Spaceship are joking about a group-text thread that keeps them sane at work. Frontman Andrew Gustafson admits he basically uses it worship Nirvana. If you’re going to be obsessed with a band and the way it carries itself, he says, why not choose the one that didn’t ever seem to give a damn?

Much of the conversation centered on artists curating image and crafting taste, and learning not to care about such things. So I ask if that fits in, if it matters that it’s cliche to name-check Kurt Cobain. Ten years ago — when Noah’s Ark was still in its nascent stages — the grunge giant’s rampant popularity would’ve made him cringe.

“When we were younger, we wanted so badly to be this kind of we-don’t-give-a-fuck ‘slacker rock,’” Gustafson says, leading the conversation from the band’s end. “The irony is that we cared so much about fitting into that image, I think now we’re truly embracing that, dare I say, punk rock ethos.”

As we chat over beers about the Noah’s Ark history and its new LP Three — each member intermittently giving context or detail — the serious streak seems to emerge and disappear in intervals. The Omaha four-piece is a real scene band, playing around town (sparingly these days) on strong bills but never venturing too far. Lazy-i blogger (and HN board member) Tim McMahan mused after its 2011 Maha Music Festival appearance that it might be the best unsigned band in the state.

Their relationships with each other seem too casual to immediately betray some former lofty aspiration. From Gustafson and bassist John Svatos meeting in art class in 2002 (when Gustafson was fronting metal band Paria), to adding Hotz (who played bass on the band’s first demo) in 2014 so they could play a Halloween cover show, it just feels like a group of friends just goofing around.

And yet Three both encapsulates and digs into that musical and philosophical transition. The Omaha quartet — comprising Gustafson, Hotz, Svatos and drummer Rick Black — released the record two weeks ago, its first in three years and third LP. It represents Gustafson’s transformation of sorts — rooted in major life events — to what he sees as a more empathetic songwriter.

Black and Gustafson both got married. Hotz continues to improve and record friendly acts his home recording studio, while also playing in Omaha rock bands Lodgings and Post-Verse. And most jarring of all, Svatos lost his father shortly after 2013 LP You Need You was released.

“We’ve had quite a few life changes amongst all of us,” Svatos says. “Shit really got real in our late 20s and we’re all in our early 30s now.”

The lead track on Three addresses and tries to cope with Svatos’ startling loss. Partly inspired by Pink Floyd’s “Time” (which Gustafson says as if to simultaneously apologize), “People” explores the realization that one’s life is not an oncoming train, but a vessel you’re already aboard. One moment you’re hurtling along and the next something smashes into your path.

“It’s really a song about awareness and knowing that we’re fragile and we can fucking die in a second,” Gustafson says.

“People” sets the thematically and instrumentally dark tone for the album. Traumatic and life-changing experiences — boiled essentially down to life and death — shaped the band’s views on negative and positive artistic influences and how to grapple with confusion and unsurity. And musically, it’s heavier than anything they’ve written, a kind of ode to Noah’s Ark’s experimental noise-rock past.

The quietly ominous “Dark Moon” gives the creeping feeling of anxiety that circumstances or responsibilities require more than the owner can give. “Hate Song” concludes with an explosion of sweeping guitars and furious drumming, the lyrics echoing the frustrations of the Black Lives Matter movement and the deaths of innocent people. And then there’s “EXP” and the crescendoing march of “BRM,” both of which seem to mirror internal struggle and contradictions in identity.

Indeed, darkness permeates Three, but Gustafson insists it happened from a more stable headspace benefitting from perspective. Enduring and arriving on the other side of those life events made such an outlook possible. Other aspects of life have become more important than selling Noah’s Ark or dressing it a certain way.

“Once those notions leave, that’s when you’re really awakened to [expectations],” Gustafson says. “I think we all agree that this is the best record we’ve ever written.”

And then there’s the carefree recording process, completed with Ben Brodin at ARC Studios (Cursive, The Faint, Conor Oberst) last December. Svatos had been on tour with Cursive and The Good Life, the latter in the months preceding. After he returned Thanksgiving weekend, Noah’s Ark had a week to practice.

There wasn’t time to rework or fret over multiple tone settings or song restructuring. Once they hammered out a track in practice, they said, that’s how it went into the studio. Unchained from expectation, they all say it led to a better album.

Even a band as seemingly nonchalant as Noah’s Ark isn’t always writing for itself. Often there are external factors at play: trends, expectations, visions of success, a perception of a larger scene. It took years for them to realize the ensuing heat affects the artistic forge, even subconsciously.

They Cite You Need You specifically. The Omaha quartet felt some pressure to continue boosting local success it had generated in the preceding few years. Noah’s Ark released 2010 LP Hanga Fang on local label Slumber Party Records and played Maha the next year. Frontman Andrew Gustafson says he entertained the notion that the band would provide him a living — at least through publishing deals or royalties, if not outright success.

That thinking inexorably worked its way into the album’s creation. The way they talk about Three, their prior efforts sound too fussed over by comparison. Both Hotz and Black note the speed and ease of the recording process

He’s quick to clarify that You Need You wasn’t made to please anyone, necessarily. Just that “analysis paralysis” encumbered the process.

Hotz sums up their feelings succinctly.

“Art is better when you can let go of the critic in your mind,” he says.