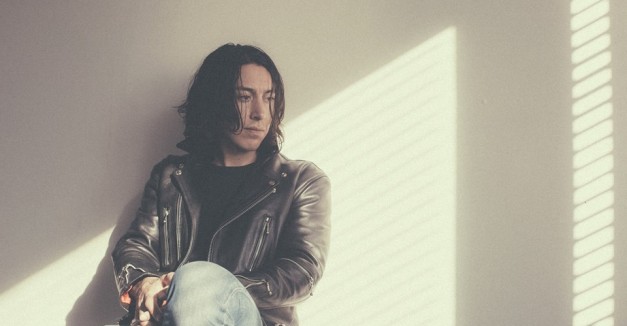 For the past seven years, Gundersen has been releasing some of the most introspective and honest music today for such a young soul.  At just 26 years old, the Washington native just released his second LP, Carry the Ghost, Aug. 21 on Dualtone Records. The album showcases Gundersen’s musical and lyrical ability, as well as his growth as a musician into a more complicated and daring songwriting.

Gundersen shies away from discussing the idea of religion, which seems to come up in his songwriting often. But in the place of a religious deity, Gundersen speaks of the Existential Truth, what Albert Camus might refer to as the fundamental question: Why should we carry on living? He puts these questions bluntly in Carry the Ghost’s “Selfish Art,” which asks, “Am I giving all that I can give?/Am I earning the right to live?”

Gundersen says one thing unequivocally: “At the heart of honesty, there’s this need to be complete as a human being.”

Gundersen — with a band that includes his sister Abby and brother Jonathan — plays The Waiting Room this Sunday, Sept. 20, with Ivan and Alyosha (RSVP here). He last played Omaha in October 2014, which he remembers comically as being “next to some alcoholic arcade.”

We spoke to the singer/songwriter about his idea of truth and honesty, his evolution as a songwriter and his confessional style.

Hear Nebraska: You were raised in Centralia, Wash., and now you live in Seattle. What does the area offer you in terms of inspiration for songwriting?

Noah Gundersen: My songwriting doesn’t come from a lot of external forces. It’s mostly me internalizing things, processing my interactions with people, my emotions. So it’s hard for me to say that Seattle is an inspiration for my music. There’s something about the winter months and the fall months that makes you want to sit inside and be cozy with some scotch. The friends that I have and the experiences I’ve had. That’s an inspiration to me.

HN: I know that you were raised in a religious family and you got your start performing in churches. In “Show Me the Light,” it sounds like you’re trying to find faith in other artists or other people (Bob Dylan especially). Can you discuss the idea of faith that comes up a lot in your songwriting?

NG: The idea of faith is kind of becoming boring to me, but I would love to talk about that song specifically. The Dylan reference in “Show Me the Light” is a very specific narrative to a relationship in my life that I had years ago. It was this girl that I was in love with as a teenager and was a part of the reason that I started writing songs. She loved my songs and I would try to do anything I could to get her attention. We were both really into Dylan.. I desperately wanted her attention and I wanted to be more like him. But I recognized in hindsight that I was a 16 year old kid trying to emulate this much older mind from a different time and I wasn’t being sincere to myself. And it goes on to discuss how I tried to conform to her faith and it goes on to discuss how I gave up on her church and her church friends and eventually her. I should say that despite the bitterness, that I should say these were good things that made me who I am, the worst and the best things that make me who I am, which is what a lot of Carry the Ghost is about.

HN: I know that Oh, Mercy is still a favorite record of yours, you’ve mentioned. What sort of things did you take from Dylan’s Christian albums?

NG: Well, I think, first of all, it’s really hard as a songwriter to talk about Dylan. He is the songwriter, so of course everyone who has ever written a song is taking something from Dylan. And it’s hard to nail down what that is. I don’t know if I can name anything I took from his Christian albums, but I just have this sort of nostalgia about listening to his albums and dancing to “Everything is Broken” in the living room. I don’t think I could name anything that I took from those albums specifically, but the idea that everything that happens to us is distilling inside us in our blood, or soul if you want to say that. But it’s in there, somewhere, in the same way when I was 15 or 16, I heard I’m Wide Awake It’s Morning, and there was this guy who was sad like me writing songs on a guitar. I think that was even more a direct inspiration to me.

HN: Your siblings, Abby and Jonathan are playing in your band. How long have you been playing music together?

NG: Abby and I have been playing together for like 8 years. Johnny started playing with us 3 years ago and that’s been great. He’s one of the most solid, peaceful drummers I’ve seen and I’ve been able to see him grow as a drummer. Just to be able to get to know your own brother on the road is an experience I feel really lucky to have.

HN: How does your offstage relationship manifest itself during performances?

NG: We interact onstage. He’s [Jonathan] a really happy, fun guy so it’s always great to turn around when I’m playing guitar and smile at him and he’s got this whole body bob that he does when he’s playing that always makes me happy.

HN: You seem to be most intrigued by autobiographical songwriting, is that true? Why are you so drawn to it? What are some of the limitations that you’ve found with confessional writing?

NG: I get that sentiment. We are all expressing parts of ourselves whether we know it or not. Because it feels true. It feels honest and real and that’s why I got into music. Partially just to be able to just have an outlet to express myself. I have a tendency to get inside my own head too much and songwriting is a healthy outlet for getting out of my head and expressing those things that can drive you crazy. I’m drawn to honesty in songwriting and I’m drawn to the more personal and revealing someone can get. That’s when you have my attention. I think Conor Oberst does that. People give him shit for being whiny and I think he’s matured a lot. You get to see his personal growth through his songs. I hope you can see the same with me. That’s what confessional songwriting is for me. People can look back and see who you were and who you’ve become and how you’ve gotten there. It’s also just the thing that comes naturally to me. For me, that’s always been talking about my feelings.

HN: What do you hope people take away from your music about you personally?

NG: I think it’s not so much that they understand more about me, but more about themselves. When I make something, it’s not so much about me, but about how people see it and interpret it. I want people to feel less alone. I remember being a kid and you think that no one feels the way you do and then you hear a song or talk to somebody and you have that mind-blowing thing that someone understands the way you feel. Because we’re not that different. And I think we just need to be reminded about that throughout our lives. The feelings and emotions get more complex. I just hope people can listen to the record and feel that someone else experiences the same things as they do. Or that it allows people to get out of their own head and escape into something that’s a little bit of a solve for some of the unhappy moments or loss or insecurities or self-doubt. We’re all just trying to figure our shit out and I just hope that I can be one part of that process. I’m on that same journey and that’s what I’m trying to express in my songs, or trying to.

HN: The tracks on Carry The Ghost seem to have more complicated arrangements than your songs on your early EPs, especially songs like “Halo” and “Running for Cover” that have more effects-laden orchestrations. Can you discuss how your songwriting has changed in order to accommodate those arrangements?

NG: Well, the arrangements really accommodated the song. It was really the other way around. I still write on an acoustic guitar or a piano. My belief is that a song should be able to hold up with just one instrument without any orchestration. I love songs that are sonically bent or more complexly arranged, but I do believe that you could put a great Dylan song with a dance beat and it would still be a great song or alone at a piano and it would still be a great song. The extra layers and things were just an attempt to make music that I would want to listen to. I wanted to explore sounds that I was interested in that would benefit the songs that wouldn’t take away from the songs. Those came second, though, after the songs were already written.

HN: Your EP and two albums have dealt a lot with the theme of honesty, going all the way back to “Honest Songs” on your EP, Family. That theme still resonates with songs, most notably on “Selfish Art” on Carry The Ghost. What is so appealing to you about the idea of honesty?

NG: Because we live in a world where we’re caught up in fabrication and presenting an idea of what we want people to see us as. That’s why honesty is so valuable to me. It’s so real. Honesty is fucked up and messy and covered in cum stains and bloody, but honesty is also really beautiful and human. At the heart of honesty, there’s this need to be complete as a human being which is an ongoing question. That’s my answer. We all want to know each other and want to be known and that’s really scary. Honesty is really scary.