State flag. National flag. Oak desk. Tufted leather chairs. The location is exactly what a band like UU (people go with “double U” for short) needed: Inside an office from which a man works daily to represent a diverse, midwestern city, a young band of local rockers present themselves to the world… or something like that.

That’s the line that came to mind when we got word from Diane Gonzolas, manager of the Citizen Information Center, that the shoot was on. If we’re lucky, UU will spend the next several years representing Lincoln (as well as Omaha and Nebraska, for that matter) before audiences nationwide in the most positive way possible.

It’s my hope that videos like this make it easy for people in those cities to turn others on to new music.

“Hey, are you going to see UUVVWWZ at The Depot this weekend,” a knowledgeable Salt Lake City concertgoer will ask her attorney friend. “What? Never heard of ’em? Well, check out this video of them playing in a mayor’s office,” she’ll say as she forwards a link. 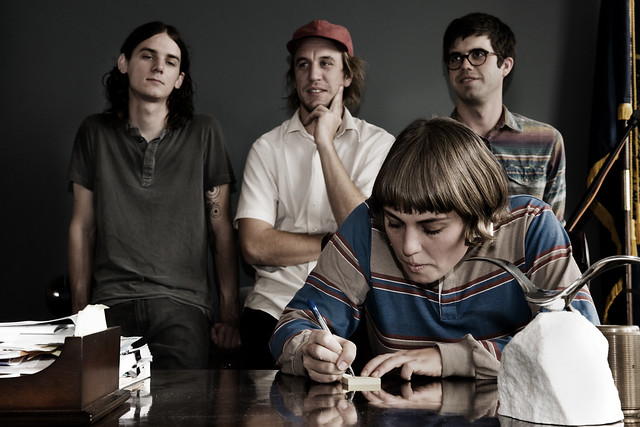 When I started Love Drunk, I thought I was just creating a fun way to practice recording bands in my home recording studio. Two and a half years and 100 sessions later, and the recording project means much more to many more people than I ever could have expected.

Dozens of people have volunteered time to making Love Drunk sessions a possibility. Without them, it would just be me, a bunch of tripods and very few bands interested in burning an afternoon with me. We’ve all invested hundreds of hours, thousands of dollars, long days shooting and late nights editing to make new music easier for casual listeners to consume. The rest is up to folks like you.

Have a friend who likes Mumford and Sons, but doesn’t have the $65 it costs to see them live? Tell them about Frontier Ruckus. If your friend likes Frontier Ruckus, they can catch them for something like $8 the next time they come to town.

The good people in Lincoln’s city offices seem to get it. There’s value in having strong local art and music scenes. People need good, affordable and accessible music. So vote for the little guy tomorrow. Vote local music. Vote independent music. Use your Facebook status and use your Twitter feed. Your local music scene needs you.

Mayor Chris Beutler (probably) approves this message, and I hope you do, too.