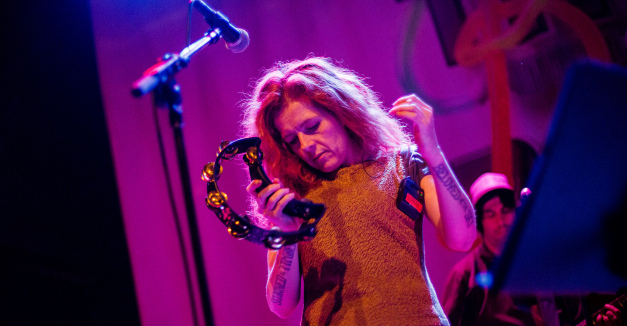 The New Pornographers are really taking the self-imposed “bruiser” moniker to heart.

That part of their latest album title, Brill Bruisers, might indicate intent to rough up the famed “Brill Building sound.” That would include songwriters like Burt Bacharach and Neil Diamond, whom frontman Carl Newman has publicly counted as part of his musical foundation. Though the homage is more to the sheer volume of music born out of the old recording space — which mirrors the Canadian super-group’s own prolific output — they certainly punch up and electrify that influence. The result is a more futuristic version of their signature sound: weaving harmonies, churning guitars, and pounding rhythms accented with heavy synth.

Tuesday night at Slowdown in Omaha, that sound took the form of an almost tangible tidal wave, an aural onslaught from start to finish spanning the band’s entire 15-year catalog. 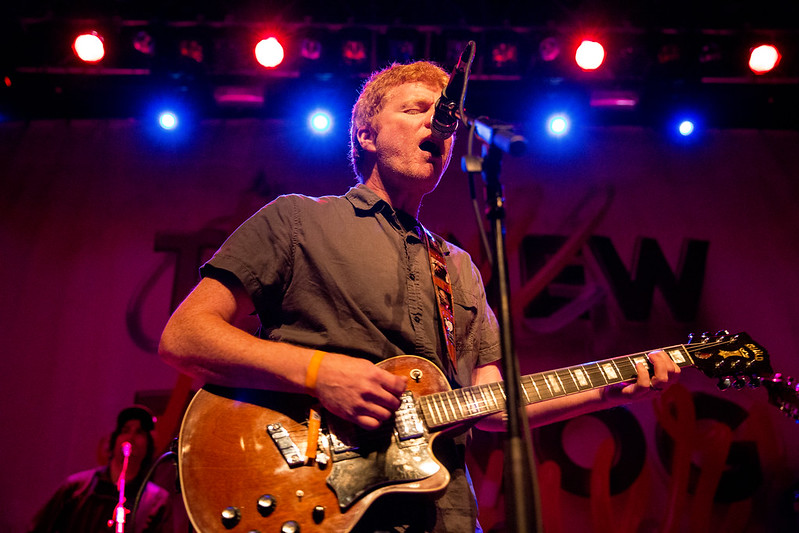 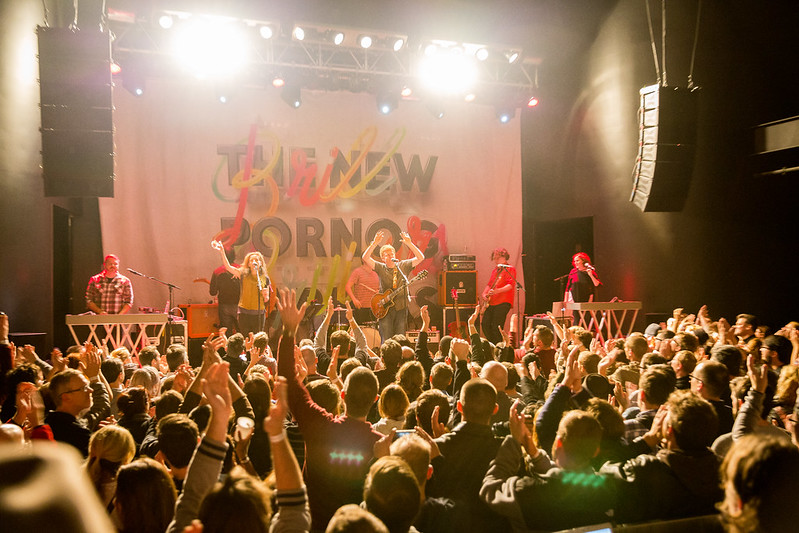 Frontman Carl Newman’s orchestration shone bright in live performance. Both keys and guitars charged forth aggressively over a striking depth of layering. As they bopped through their opener, the new album’s title track, it felt as though there were seven guitars and five keyboards instead of three and two, respectively.

For how cryptic Newman’s lyrics can be, the literal proclamation of volume was clear. Newman and vocalist Neko Case sang “these things get louder” in unison through “Moves,” and the “nearly thunderous” atmosphere of “Backstairs.” At times, the volume proved too much for certain instruments in the live setting. Newman’s acoustic guitar drowned in “Spanish Techno” amid the heavy distortion of lead guitarist Todd Fancey. Somehow he coaxed an audible harmonica out from under vocalist/guitarist Dan Bejar’s prickly wail.

Touring the new record appeared to affect both pacing and intensity, which underwrote the majority of the setlist. They ramped up the tempo, chugging along on “Bones of an Idol” and nearly morphing “Jackie, Dressed In Cobras” into a drag race of notes descending in unison. Vocalist/keyboard player Kathryn Calder led the first semblance of a breather in “Another Drug Deal of the Heart,” which was more of a paranoid lapse before launching back into the manic palette that colored most of the set. 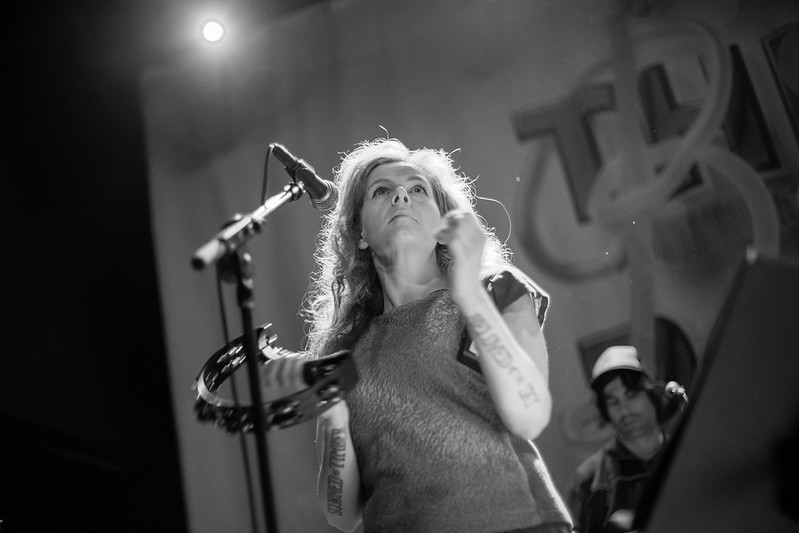 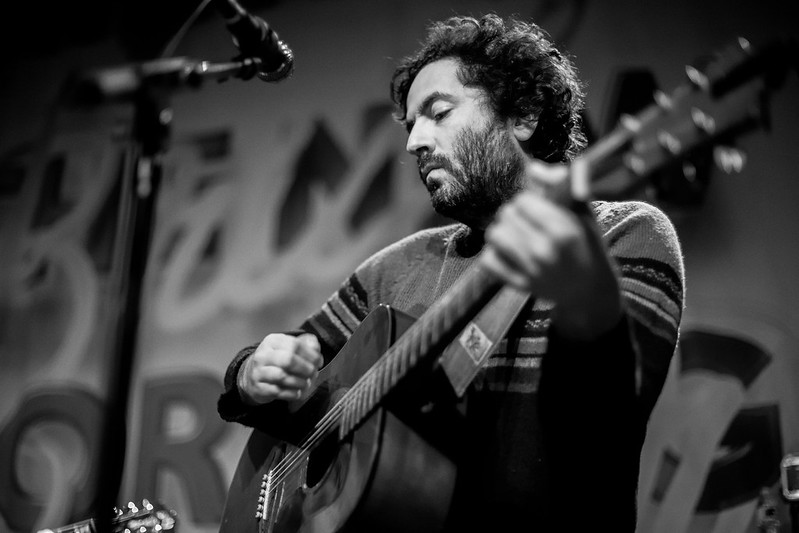 The best of the New Pornographers arsenal, often both sweetly disarming and full-speed ahead, can will the listener to his knees with an assault of instrumentation, all-the-while carrying you through harmony-filled refrains and sing-a-long outros. “Crash Years,” too, sped along, featuring a searing, synthy lead from Fancey, as well as real-life whistling. “Sweet Talk” might have provided the best example, with guitar pulses, electro-reverberating synth noises and four voices weaving in and out of each other.

Indeed, vocals were utilized much like additional instruments, especially Case’s.

“Sweet Talk” also highlighted the vocal chemistry that Newman and Calder have developed since her joining the band in 2003, with Case popping in and out to punctuate hooks and verses. As Bejar crooned sharply “for their choices/the bells ring,” the outro of “Testament to Youth in Verse,” Case’s voice rang out every third “no” as if to emulate said chiming.

She also knocked each of her lead lines out of the park, most notably “Champions of Red Wine,” where she sang a harmony part as lead, the stage awash in burgundy and needled with futuristic bloops. 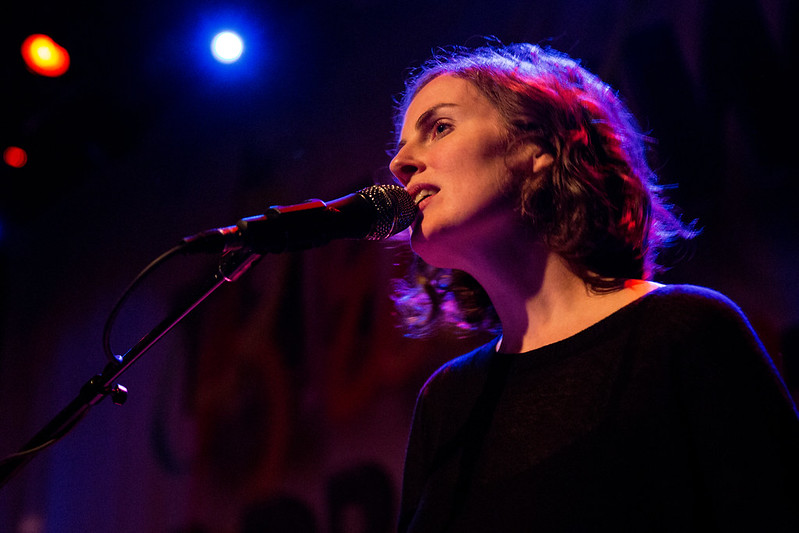 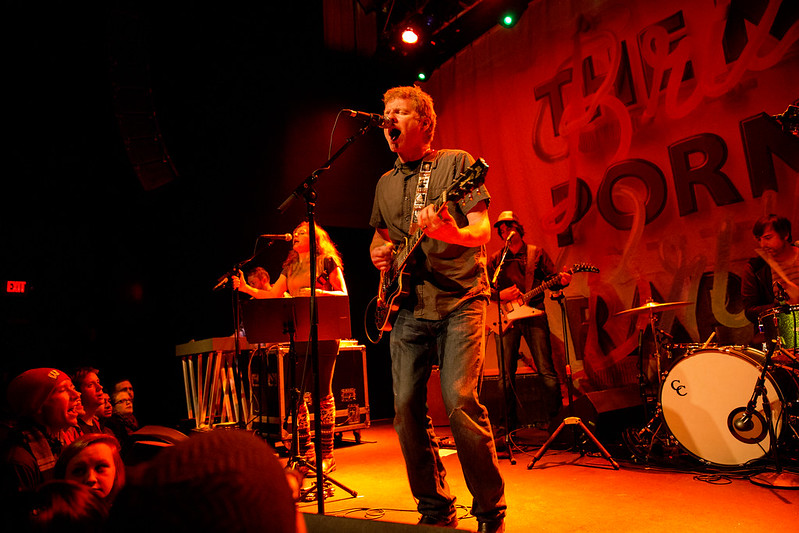 The tidal wave crested in dual encores. “Dancehall Domine” began with an overpowering, heavily affected synth, exploding into a rumbling romp. The show ended for a second a time as the Twin Cinema classic epic “Bleeding Heart Show” rocked through an extended outro, and the packed house roared. By the end of the second encore, it would not have been a surprise to find burst eardrums and brain bruises.

And the various nuances of each members’ stage presence colored their performance, comprising a sort of variety show. Newman shook his leg more and more frantically as the night wore on. Calder bounced behind her keyboard. Vocalist/guitarist Dan Bejar took a deep bow and exited stage left after “Jackie, Dressed in Cobras,” a chronic occurrence that followed each of his seven songs. It felt as though his presence during any of the other numbers would have been superfluous, given the stacked cavalcade of guitars and the black-sheep nature of his voice. 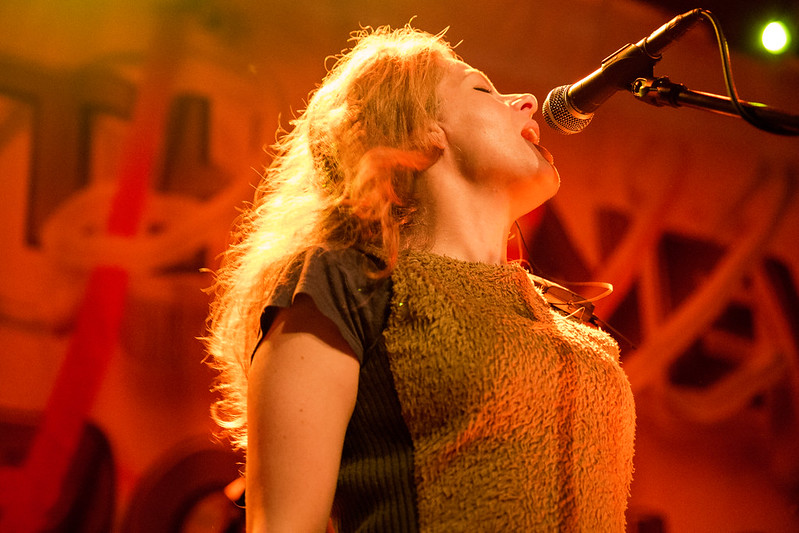 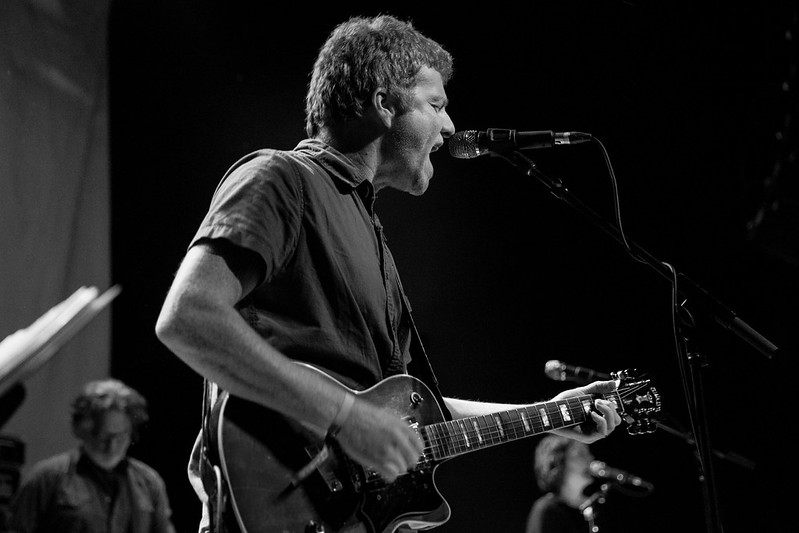 Case and Newman are known for their onstage banter, which was in full effect. Five songs in, after Bejar pushed past him at the conclusion of the dark, charging “War on the East Coast,” Newman introduced himself.

“I’m Conor,” he jested playfully. “We are ‘Local Band’ … on the Saddle Creek label.” They also continually harped on the biting cold. The first thing out of Case’s mouth was, “It’s cold as balls!” No argument here. Before finishing the main set, Newman proclaimed his admiration that any of us even made it out. “I would’ve blown off this show in a fucking second. If it was free? Still, the personal cost is too high.”

More photos: The Pains of Being Pure at Heart 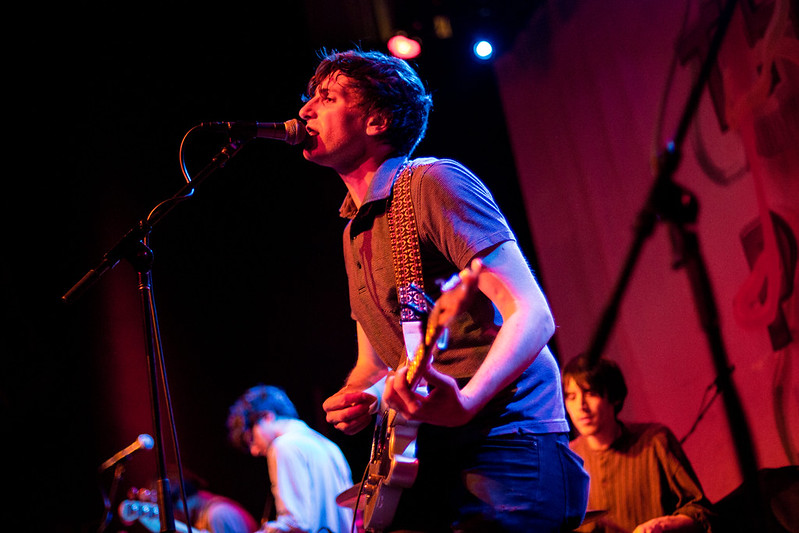 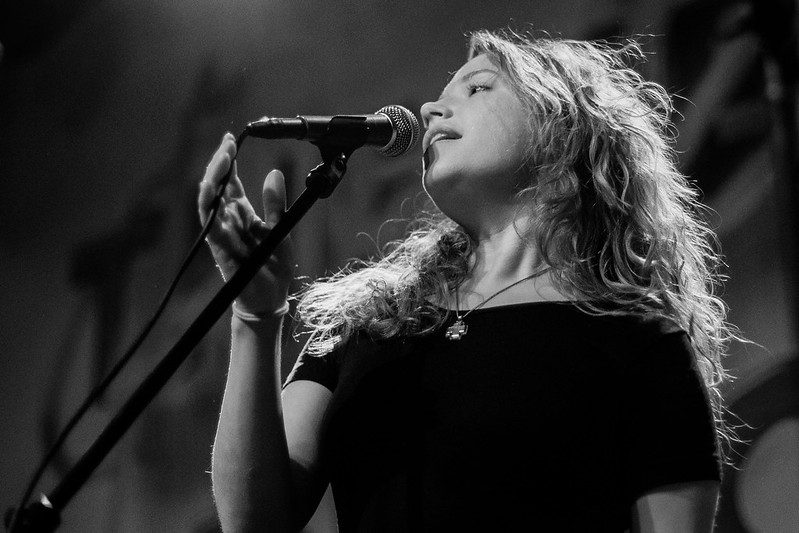 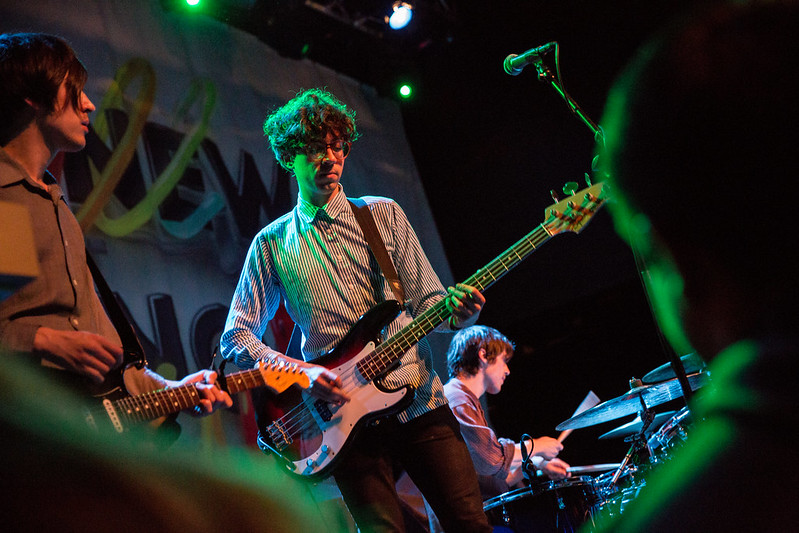 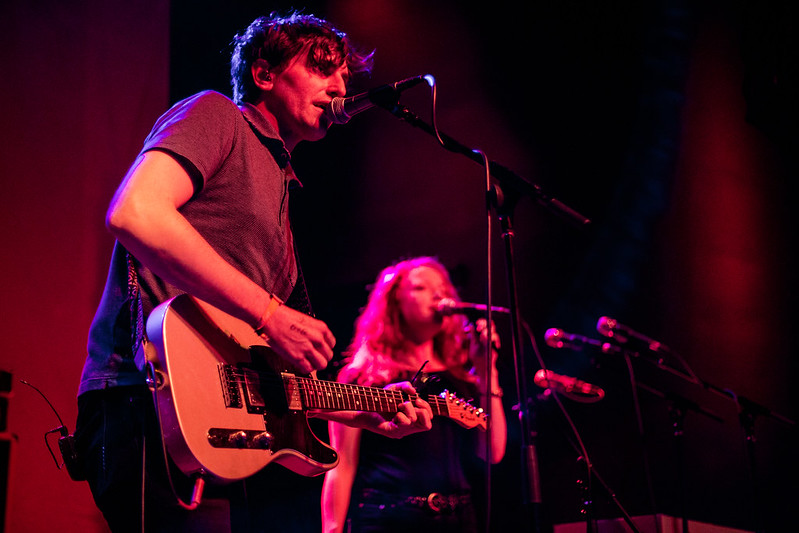