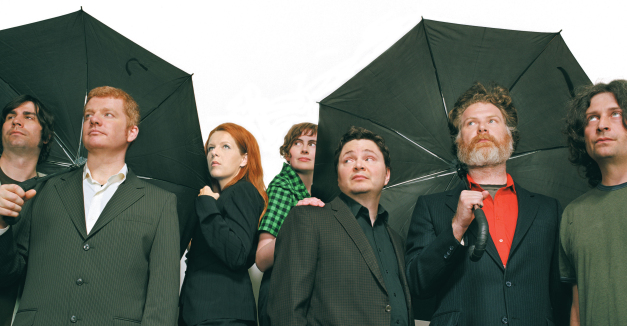 Every few years since 1999, Carl Newman dusts off the hot-rod that is The New Pornographers, assembling an array of accomplished musicians to help take it for a spin.

The Canadian super-group — comprising singer-songwriters Neko Case and Kathryn Calder, as well as Destoryer’s Dan Bejar and John Collins — released Brill Bruisers earlier this year, four years since its last record. In the press, Newman has deemed Brill Bruisers a “celebration record,” a sentiment bolstered by its relentless energy. Present is the familiar formula of chugging guitars, sing-along harmonies, cryptic and witty lyrics, and bouncy rhythms. That sound has defined the band on popular albums Mass Romantic (2000) and Twin Cinema (2005), yet has been slightly relaxed on their most recent efforts. This go-round, souped-up synth and futuristic beeps and whirrs make it feel as though we’re blasting into space on an elated rocketship.

Many of its members — including Case and Calder, as well as Behar’s band — have been busy with their various other musical projects, but rallying together for a new record and tour can provide an escape, or at least a breath of fresh air.

Kathryn Calder, keyboard player and vocalist who joined the band in 2005, spoke with us about what it’s like to get the band back together, her contributions to the new record and a choice Carl Newman lyric that continues to stick with her.

HN: [Brill Bruisers] is the first New Pornographers album since 2014. It seems like everybody was pretty busy in the meantime, including yourself with a solo album. What’s it like when the call goes out and everybody knows it time to get back together. Is it like the bat signal going up?

KC: [Laughs.] That is kinda what it feels like, yep. We had a couple of years off and like you said, we were all busy doing other things, but … the band is actually how I can really make my living [laughs]. So I was quite relieved to be going back on tour and not try to cobble together a self-employed income, [any] music related thing I can scratch together.

I was excited for the new record. It had been awhile since we had all been on a break, it was actually great to get some perspective. You kinda get lost in a touring mentality where you’re busy all the time … [it’s nice] to stop and realize how great it is.

HN: I’ve read that some of the others in the band regard it as an escape or a holiday from playing for their own work. Does it feel that way to you?

KC: Well definitely, yeah, it’s a fun group to be in and because of the dynamic of it, there’s a lot of people working for us, and so there’s not as much responsibility really on me personally. I show up and I sing, and I have to practice a little bit and I have to make sure I know how the songs go, but other than that, that’s kind of the only real responsibility that I have. I know that’s not the case for Carl [Newman], obviously. So it’s kinda nice to do both: one where you have you’re own creative control and then other one where you show up and you try to do your best for somebody else’s vision.

HN: What do they demand differently from you as a musician and as a songwriter?

KC: When we were recording [Brill Bruisers], I flew to Woodstock and stayed with Carl at his in-house studio. Carl and [bassist and co-producer] John [Collins] were there and I basically improvised for kind of a week of keyboard parts and sounds. That was pretty challenging because I hadn’t heard the songs before. I had to just [go with my] first instinct almost. John would be at the computer, scrolling through sounds that they liked and were using on the record already so I kind of like came up with parts from … the clues that they were giving me.

That was really interesting and totally different from how I operate on my own. I like to have a lot of time, think about things, improvise and kind of whittle it down. But with the band … you can’t be too much in your head, you have to kinda just [play]. And then, even after that, John and Carl have my parts and my vocals and they were still tweaking them and adding vocoder to piano and just all kinds of crazy stuff after I left. It’s just this totally different thing.

HN: It’s funny to think about Carl sitting there and, not demanding, but [asking you to make things happen] and playing with it afterwards. It seems like a neat style thing for him.

KC: Yeah, he’s very good at directing, you know? He’ll pick out [specific parts]. Which if you’re sitting there listening to somebody play for like 12 hours a day to pick out those little bits of parts that they did that you like, it takes an incredible amount of focus without zoning out and thinking of something else.

HN: The new record feels a bit more punchy and upbeat all the way through, and it also seems to feature your playing a little bit more. It sounds like that was maybe that was something they kinda decided after hearing your parts. Or was it a more collaborative process?

KC: Definitely. What’s funny about that [is] my vocals are on there a lot. I hear myself some, and I have no idea how much of the synth parts were me and how much were John. Most of the really obvious synth parts were actually John, and then there’s a lot of little bleeps and bloops and piano bits and things that create the underlying sound that were me. But I actually don’t really know who is who, because it was such a blur and I have no idea what they did to the sounds.

HN: This brings up another thing, that all of you or most of you are musicians that write and record for yourselves, for your own solo projects. There are a ton cooks in the kitchen. Does that ever make the recording or touring process challenging?

KC: You know, I think it’s pretty much understood that Carl is the final word on most things when it comes to the record. Even when it comes to him and John, if Carl says, “No I want this on,” or “I want this chopped up,” then it happens. It’s kind of the same when we’re getting the live band together, and we’re working on our sounds and getting everything organized. I kinda defer to Carl.

HN: I wanted to ask about the “Dancehall Domine” video. There’s a lot of like where you took the main shots and then a bunch of B-Roll film and made almost like a brief documentary of you making the video. What was it like to shoot that?

KC: It was really fun. [producer/cinematographer Michael Leblanc and writer/director Scott Cudmore] had us come to Toronto and they had all these extras everywhere and it was kind of in this big warehouse. There were people walking around in costumes and with facepaint and dancers. There were ballerinas hanging around.

They had all these really creative, really fun ideas for what they wanted the video to be like. So we just went along with it. They had it all worked out, they knew what they wanted to shoot and every half an hour of the day was planned. I really enjoyed watching all of the chaos and just kinda hanging around while people are making videos for you. It’s always a little bit like you’re working on trust with the director. With this video, it was kind of like, I have no idea what this is gonna be like from what they sent me. Zero idea. As soon as I got there, I was like, “Oh I get it, its gonna be great.”

HN: What is one Neko Case/Carl Newman/Dan Bejar lyric that you’ve found yourself chewing on or thats maybe kept you up at night before?

KC: On the new record or any record?

HN: Up to you. What sticks out?

KC: One of my favorite ones — I don’t know really what it means, although I kind of get a feeling from it — it’s from “Use It” from Twin Cinema. I really like the line that says “two sips from the cup of human kindness and I’m shit-faced,” [laughs]. That’s one of my favorite lines of all time. I just [think it’s] so funny and great. I’m not sure if its meant to be funny or meant to be great but I really enjoy it.

HN: Is there one from the new album?

KC: [pauses] I like “Dancehall Domine.” What’s the line? “You don’t have to brave the line/no they’re letting you right in.” I like that. It’s also really fun to sing because its got this rhythm to it that’s really fun.