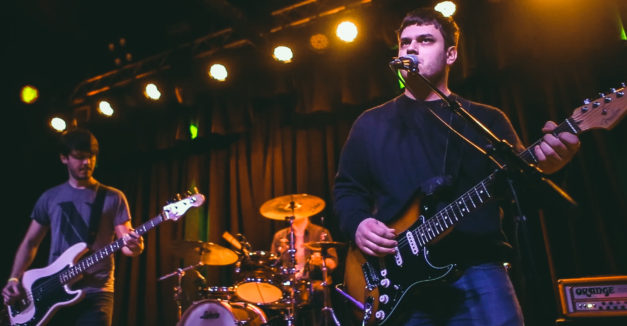 Though there’s a certain dark sadness that runs through The Good Life’s catalogue, it has always been drenched in Tim Kasher’s cutting wit. Songs like “A New Friend” — the penultimate track on 2004’s Album of the Year — trade in suspicion, jealousy and self-deprecation.

The tone morphs, however, in the hands of Omaha indie rock band See Through Dresses, which covered the aforementioned ballad of an ex-lover at this year’s Take Cover Omaha concert. Its narrator assumes vocalist Matt Carroll’s trademark earnestness, and while both he and Kasher are both lyrical open hearts, it’s difficult to imagine Carroll as the titular “film school drunk.” Thus, instead of spitting snark at its antagonist, the song feels born of a forlorn heart, one that might wait their copy of Harold and Maude instead of throwing it in their ex’s face.

This brooding plunge is underscored by its tonal differences. Awash in Sara Bertuldo’s reverberating lead line, “forget me, marry him at once” sounds like a fading command rather than flippant sarcasm. Drummer Nate Van Fleet and Bassist Alex Kirts maintain the track’s thudding, resolute pulse.

Watch See Through Dresses cover “A New Friend” below: