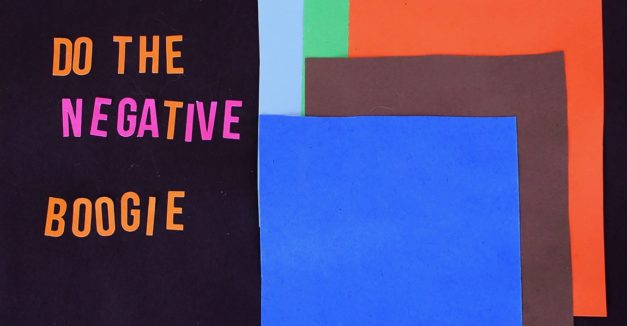 David Nance’s Negative Boogie administers a near-flawless dosage of dire, unpleasant grinding cocktailed with hooky, evocative amusement. You could say the record “cuts [its] booze with lemonade,” as Nance monologues on the album’s perhaps most amusing and evocative track, “Dlatumf Blues.” As for the wild-sounding human who pairs these two tones (the good-fun and the utterly sinister) time and again, he doesn’t seem like he’s thinking too hard about what makes the ideal, whacked-out rock song. But here come 11 of them.

Released earlier this month on Bada Bing Records, Negative Boogie finds the Omaha songwriter and bandleader making the most of ARC Studios and his recent ascendence as a local and touring artist. Carrying on all the rage and euphoria of last year’s More Than Enough, Negative Boogie prioritizes us registering Nance’s lyrics as well as the character of each track. They belong to recognizable strains of rock history — Crazy Horse, Willie Nelson, the Velvet Underground, Randy Newman — all transformed by the promise of the David Nance mess: Wreck a song with every twitch, screech and snarl you can without destroying the sturdy, clever melody and structure in the middle of the madness.

Listen below as Hear Nebraska’s album review podcasters discuss Nance’s newfound sense of production, the humor hiding in his vocal flourishes and why Negative Boogie is a mid-way frontrunner for On The Record’s top album of the year.

Catch up with our On The Record podcast series this year and beyond with our playlist below. Recent episodes have covered albums by Twinsmith, See Through Dresses, David Ozinga, Big Thief and more.