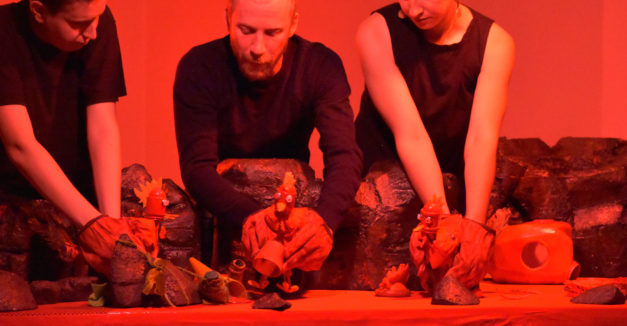 [The following feature previews Rock Island Blues and its second weekend at The Mez. Performances at 8 p.m. Friday, May 26 and Saturday, May 27 and at 2 p.m. Sunday, May 28. RSVP here.]

The Mez has likely produced a lot of sweat in its as-yet brief life.

At the back of a forgettable building, on the eastern reaches of downtown Lincoln, the studio space is without windows or meaningful ventilation. It’s on the second floor but as insulated from open air as it feels, it could equally be in a basement.

Walk up a flight of stairs, around a couple corners in a dingy, scuffed-walls hallway with worn blue carpet, past a handful of doors that look like they wouldn’t possibly open for you, up another flight of stairs and then back down because you may have heard voices behind that last shut-tight industrial-grade door you passed, and there you are. While the location is more clearly marked on show nights, it’s about as good as it gets for Lincoln’s newest multidisciplinary arts venue. For DIY spaces, visibility can often mean the end of things, such that off-the-books studios and stages quickly come and go. Nondescript is what you want, and the Mez has it.

On a Wednesday evening last week, on the other side of that door you nearly walked right by, about a dozen cast and crew are preparing for the opening weekend of Rock Island Blues, a puppet play written, directed and produced by Robert Stewart.

Air in the room is thick and cast members dressed in black or near-black pace around thumbing through thick loose-leaf scripts. There’s small talk, punctuated with the nervous energy that inhabits perhaps all performance pieces in the days before premiere, the anticipation as the small details are tuned in the final moments. Tonight is the first rehearsal with the score, written and performed by John Friedel (Green Trees). The first show is in 48 hours.

Along the walls are relics from previous shows and events, a projector screen against one wall. DIY spaces play a variety of roles, as much multipurpose rooms as anything. And to that end the Mez has hosted readings, film screenings, performance art pieces, paintings and music performances (and maybe more, if the yoga mats in the corner are any indication).

Some adjustments are made. Lighting is tested. Stewart cuts the tag off a cast member’s t-shirt (worn inside out so as to be all black) and calls the room to order. Rehearsal begins.

When Stewart began working on the play, he said he had it in mind to make it a piece for children, and it shows — it is, after all, puppeteers putting on cartoonish voices to animate chickens made from salvaged materials. But there’s no pandering or oversimplification in Rock Island Blues.

“Kids can understand complex ideas,” Stewart, who has a two year-old son, said. “There’s not a need to oversimplify the storytelling. So I wanted to avoid that but still get to some resolution at the end.”

Through the first act, Rock Island Blues does read like it may be a simple parable for the global refugee crisis. But the questions it poses and themes it explores quickly become much richer than another retelling of the golden rule. Between scenes, a narrator reads cryptic, sometimes biblically-inspired idioms that serve to keep the viewer off balance as much as they illuminate the narrative.

And beyond the play’s on-page text, the production gives the audience (children and adults alike) a little unconventional theater to chew on.

Call it the art of necessity, maybe. It’s in the puppets made from painted milk jugs and rubber gloves, the dual overhead projectors providing atmospheric animation, how the cast visibly arranges itself between scenes, the suggestion of water through blue and silver cellophane. It’s getting-by on a budget and the result informs every DIY performance piece. In Rock Island Blues, it manifests in an impressionism as reliant on suggestion as it is on magical realism and Friedel’s ‘50s sci-fi score for its other-worldliness.

Stewart has been writing and producing plays for years. He said he’s done upwards 20 of them in Lincoln, often under his production umbrella ‘wet rats’ and at spaces like the Mez. Without them, it’s hard to picture where in town one might see theater like Rock Island Blues–which is to say unconventional theater, necessity theater, theater outside of academia and traditional production.

“They’re less formal,” Stewart says. “Since they aren’t theater spaces, every room is a little different, so you find ways to stage the plays you haven’t even thought of. Maybe there’s pillars here so you have to move the staging. I like that aspect of it.”

At such spaces, there’s also often a greater sense of community building, or maybe more rightly, community maintenance. The Rock Island Blues cast and crew aren’t strangers to one another and haven’t been for a long time. And it’s likely that many of them are not strangers to the play’s audience. These are people like Friedel, Nolan Tredway, Katie Loughrist, Angela Barber, James Milton Wachtel (to name a few), who have been around the Lincoln arts community for years.

The flickering hallway fluorescents and the exposed ceilings, the impressionistic traces of the production, the cast of friends and collaborators, it all stands for a kind of making-do. But Rock Island Blues is not in want of more resources or a different venue. These productions are bolstered by circumstance. The effort is visible and the sweat is mutual.