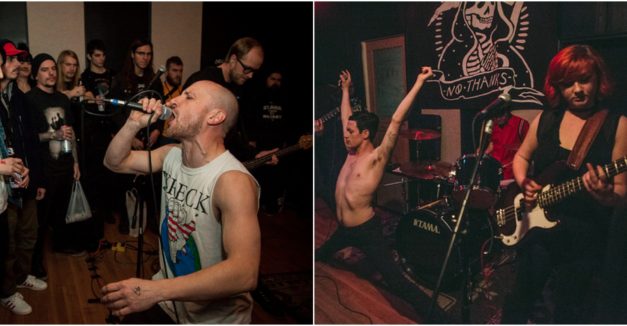 In its seventh consecutive year, Nebraska Hardcore Showcase is a festival at Omaha’s Lookout Lounge featuring some of the state’s most active punk bands. The showcase also brings in local bands that don’t play together often, such as Hercules and Pisswalker.

This year, the showcase features 16 bands, many of which played last year. Hardcore punk is not the only genre; noise act CBN, post-punkers No Thanks and doom metal band Downtrod are among those rounding out the tastes of Nebraska punk fans.

Planned Parenthood will offer free STD screenings, condoms and more from 3 pm to 6 pm. The organizers behind Omaha Zine Fest will set up a station for people to build their own zine, as well as selling zines and taking submissions for the upcoming second event.

Nebraska Hardcore Showcase 7 begins with Bib at 2 pm Saturday at Lookout Lounge in Omaha. RSVP and see the lineup here.

Here are five bands to look for at the showcase:

The band rarely gets to play together because Brokenrope lives out of state, so the showcase will be a special performance for fans.

No Thanks’ performance doesn’t get old easily, thanks to vocalist Brendan Leahy’s stage antics. Expect to see him jump offstage to twist around and lean on audience members, or do a headstand in the middle of the stage.

The band makes a point to make sure each of its fans feels safe and represented, often announcing a “girls only pit” for femmes to mosh freely in.

The band released a debut EP in June featuring the politically-charged post-punk songs about feminism and taking down capitalism.

Two new bands this year join No Thanks in adding women representation to a male-dominated genre. The showcase will be the first show for both bands.

No Thanks’ Camille Stout sings in Crease. Alex Heller and Kaitlan McDermott are vocals and bass, respectively, in Dilute.

At a Nebraska DIY forum in June, many said they would love to see the big players in Nebraska’s punk scene support women who want to play music. This particular showcase will hopefully be the start of a wave of more female representation in Nebraska punk.

Members of the band have announced recording their first release, set for later this year.

Omaha doom metal band Downtrod will certainly a break from the fast-paced hardcore, but that doesn’t mean they’ll skimp on the level of noise production.

Downtrod released two singles via Bandcamp in February. The songs are astounding compositions running over 15 minutes, a stark contrast from the two-minute punk ditties of the other bands. Blood-curdling vocals and a deep, rumbling bass will grab listeners.