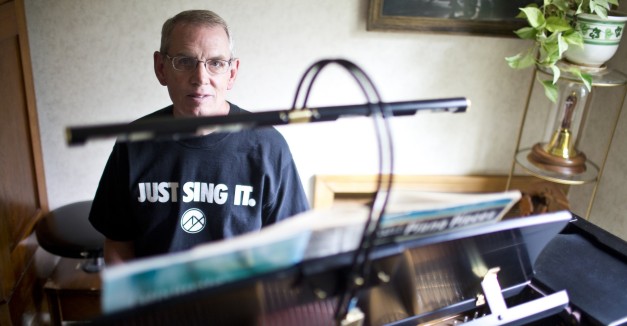 Whether it’s a rural community or a modest group of barbershop singers, harmony is especially important to the success of small groups. That attitude forms the ethos of the Apple Corps men’s barbershop choir. Founding member Dr Dean Thomson puts it succinctly:

A Nebraska City resident and recently retired physician, Thomson is the de-facto leader of the Apple Corps, organizing open practice every Tuesday, assimilating new singers into the choir and coordinating the annual Harmony University trip. The group prides itself on inclusivity and community connection.

And that’s the idea behind open practices. Any interested community is welcome to attend practice and become a member of the choir. A good ear helps, but Thomson strives to maximize the potential of any who sign up.

“We’ll do everything we can to help them have a good time and to learn how to sing,” he says.

When Thomson and a few of his fellow Nebraska City residents started the all-male barbershop choir in the mid 1980s, they found that the best way to get started was to get their hands dirty.

As part of a modest group of four, Thomson hatched the idea that would become the Apple Corps. They knew of barbershop groups in other states, but with families, day jobs and busy summers, there was only one solution.

“We didn’t think it was feasible to drive a long way to join a chorus, so we decided to start one on our own,” Thomson says.

Thomson had always been interested in vocal music, becoming familiar with basic scales and harmonies from piano lessons as a youth. But he had no formal training in the way of composition or conducting.

A friend had attended a few sessions at Harmony University in St Joseph, Mo. (now in Nashville), learning everything from how to arrange music and the physics of sound to singing in a large group and how to produce a show.

“It gave me the opportunity to learn from experts,” Thomson says. “It was a big help in terms of getting hands-on experience.”

If learning the intricacies of singing as a group was the important first step, in the eyes of the group, becoming bonified was the second. Credentials with the Barbershop Harmony Society require at least 20 charter members. With community support, they reached their goal almost immediately.

Now 30-plus strong, the Apple Corps performs at Sunday church gatherings, anniversaries and special holiday-centric events like Advent and Independence Day. Each spring, they host an annual showcase featuring popular national barbershop acts like Vocal Spectrum, the Acoustix and Disneyland’s The Dapper Dans.

Several of those groups are international award winners, which speaks to the group’s dedication and passion. Not only does the ensemble keep current with changing trends — Thomson calls more advanced arrangements “calisthenics” — it works hard to create harmony in the community and amongst its members.

The pinnacle achievement comes when those seventh notes click into place, the hallmarks of barbershop performance meeting in perfect unison to bring joy to Apple Corps audience.

“When you see people smiling, you can tell that their troubles are gone for a while,” Thomsen says. “The music is touching them in some way.”