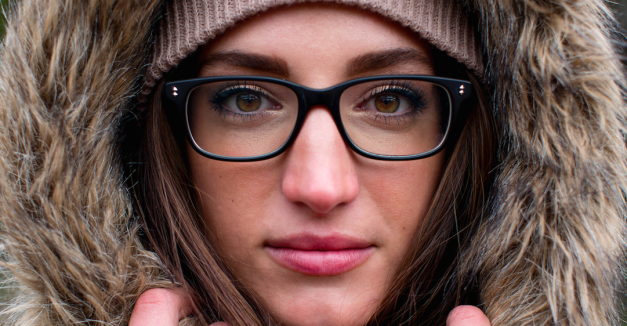 There are dozens of pieces to it. Striking photos of stark Nebraska landscapes, skies fraught with thunderstorm clouds, folksy portraits of small town community-members, and, of course, Friday night football games. Frakes’ goal is to show Nebraska as the beautiful place he and so many others see it.

One piece of the project, a music video for Rachel Price’s “Little Nebraska Town,” caught particular attention. Price’s song talks about the significance of football games in small town and Nebraska culture. The video features her in boots and a baseball cap on a rustic truck in a wide pasture. There are bonfires and small town football games, shot by Frakes.

The video quickly attracted attention upon its release as representative of the small town experience. One website said “If You Grew Up In Nebraska, This Video Will Give You Chills.” It’s garnered 270,000 views on Vimeo.

It is, essentially, the most persistent Nebraska stereotypes rolled into one visually stunning video, packaged with a pop-country song. But certainly there’s something to it. You can’t discount the video’s success, or the statewide obsession with football, or the myriad excited audiences along Rachel Price’s recent four-week tour that stopped at many little Nebraska towns.

Certainly, “Little Nebraska Town” meaningfully relays part of a particular type of Nebraska experience. But, even if The Nebraska Project wants to package it that way, we know that experience is not universal to Nebraskans. Even to rural Nebraskans.

We got to wondering, what other videos has Nebraska produced that relay a different sort of experience with the state? Below our interview with Rachel Price, find some of our top picks, which depict a version of Nebraska that knows desolation, packed bars, political urgency and skateboarding.

Hear Nebraska: So you grew up in O’Neill and now live in Nashville, right?

Rachel Price: We moved to O’Neill when I was three. I was mainly an athlete all through high school and did music on the side. I got my first guitar when I was 11. I didn’t sing, I didn’t know that I could or wanted to. I started singing when I was 13 or 14. I would only sing when nobody was home.

I started making YouTube videos when I was 15 and did that through my sophomore year of college at SDSU. I had a producer out of LA watch one of my videos and ask if I wanted to come record at their studio. I did that in March and we released a four-song EP in May.

He had recently moved to Nashville and was kind of in my ear about moving there. So I decided a month before my junior year was supposed to start that I was going to move. I up and moved and I didn’t have a plan or anything.

I met Tayler, my manager, through Facebook. He’s originally from Columbus and lives in Nashville. He hooked me up with my guitarist, then “Little Nebraska Town” happened and now we’re here.

HN: Tell me about “Little Nebraska Town.” Bill Frakes shot that as part of his Nebraska Project, how’d you get involved?

RP: My fifth grade teacher and my pole vault coach are good friends with Bill. He mentioned something about needing content for the Nebraska Project. They played him my song and he liked it, so we shot a video.

On December 1, they released it. I didn’t even know it was going to be released. I had no idea what was going on, I was getting all these notifications.

HN: That seems like an extremely Nebraskan way to connect, through family friends. You said you weren’t expecting it to blow up, what was that like?

RP: I was in complete shock. I live by myself and I’m freaking out by myself. I didn’t know they were going to release it, I had kind of forgotten about it. I kept refreshing page and it was going up 200 views a minute, I was getting all these likes on my Facebook page.

Tayler, of course, took that and ran with it. So we planned a tour around it.

HN: It seems like, with this video blowing up, a lot of people have placed you as a representative of Nebraska and small town culture. How do you feel about that?

RP: My upbringing was the most important part of my life and I want to represent that in the best way I can. When people ask me about Nebraska, I say that, yeah, it’s boring, but growing up in a small town is unlike anything else. I wouldn’t want to have been raised any other way.

HN: How do you view yourself in the context of other music happening in Nebraska.

RP: I don’t know. There are a couple country bands that we’re good friends wit,h but I don’t consider myself a country singer. “Little Nebraska Town” is my one country song so we want to use that to kickstart my music career.

In Nebraska, everybody likes country music. So we try to get super close to that line of being country, then pull it back when I make new stuff.

HN: Kind of like the Taylor Swift model. What other country bands are you friends with?

HN: Talking about using country music to make in-roads, I think Lincoln and Omaha have a lot of music going on, but not so much the rest of the state. I’d like to see more people playing music all over the state. Do you think you’re helping that cause?

RP: I have people come up to me after shows and say we’ve inspired them to pick up an instrument they used to play or start singing.

When we visited each town, it was a huge social event. It brings people together, that’s what music does.

HN: In Lincoln and Omaha there’s not as much country as there is folk, bluegrass, punk rock, bands like that. Do you think they’d fare well in a place like Alliance?

RP: It depends on the event. We do some coffee shop stuff and it’s an acoustic tour so we can’t get too crazy, but I think full bands definitely have their place. Maybe this tour will help bring back the whole music scene. Once they hear another band is going to be in town, they’ll give it a chance.

HN: So if “Little Nebraska Town” is representative of how Nebraskans see themselves, what else could be musically representative?

RP: My song is about football, that’s what we grew up with. But there is so much more to being Nebraskan than that. So maybe something other than football.

HN: How do you transition from being the woman that wrote the song about small town football into Rachel Price the Musician?

RP: That’s funny that you say that. There was a guy the other day — in my video I’m wearing a ball cap and boots. I don’t really look like that — he was like “Why don’t you try dressing like a small town girl instead of a coffee house hippy?”

It’s not always the smoothest transition. Being in Nashville, it’s much easier to do that. You’re surrounded by people with similar interests. I consider myself a small town girl, but I’m also a Nashville resident.

HN: But you have these people projecting onto you what they think you should be.

RP: Exactly, telling me how to dress, not to wear my glasses. I keep doing me, I guess.

HN: Do you ever think people wouldn’t treat you that way if you weren’t a woman?

No one is going to agree on a single representation of Nebraska in a music video (nor should they, probably). Here are five we thought of when pondering a Nebraska with spark, spirit, camaraderie and work ethic. Add others you think do the job in the comments.

“Talk to Me” by Once a Pawn

“The Train, The Drink, and The Dawn” by Kill County (Love Drunk)

“What Can You Do For Me” by The Citizens

“California” by Landing on the Moon