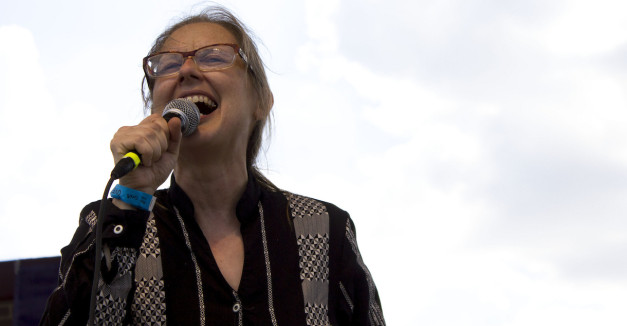 It’s fall 2012, and Marty Amsler is spending his lunch break in 1995. When you’re trying to relearn 21 songs you haven’t played since the first Clinton administration, you take practice time whenever it comes.

Amsler, creative director of Bailey Lauerman, had taken his bass guitar to work, which prompted a coworker to suggest that his bass strings belong in a museum.

Or that The Millions bassist might contract tetanus if he continued to play with the strings that were rusting on his instrument, the same strings played at his last Millions show — 17 years before.

In this sense, the “dusting off” of The Millions — a Lincoln band that found breakout alt rock success in the early ‘90s — was literal when it reunited for a show on Dec. 1, 2012, for the first time since 1995.

Officially, The Bourbon show, which the band estimates brought in more than 500 people, was scheduled to promote Poison Fish, a previously unreleased collection of songs from the early days of the band in 1990. In light of a planned release from Randy’s Alternative Music, label owner Randy LeMasters reached out to the band to see if they’d support Poison Fish in a live setting.

But unofficially, the months leading up to the release were full of questions. First and foremost: Could this Lincoln group of legendary local status and national acclaim reform having never formally discussed the possibility? The peak years, after all, were fraught with serious health concerns, debilitating disagreements with the Polygram label and some very taxing tours.

But for his part, guitarist Harry Dingman said he had a moment of intuition that The Millions might once again draw a crowd large enough to form a line around an O Street corner.

More concretely, singer Lori Allison said it was the crop of Poison Fish songs — which predate any label or studio disagreements — that made the idea of a reunion appealing.

“The early songs seemed really attractive to play,” she said, adding that if they’d simply been asked to play the hits, the answer may have been different. “I think the happiest we were was when we just started, sort of like we’re doing now. Just playing music and having a new song every time we’d practice.”

There’s no question the band was running on a high in the wake of the December 2012 show, with Dingman joking they had enough steam the morning after to sprint into a 30-day tour. Still, the newly reunited Millions didn’t immediately commit to even one more show, much less 30.

“It was such a blast,” Amsler said. “But the original call or intention was not, ‘Do you want to get back together?’”

Taking things one step at a time, The Millions agreed to three more appearances this year. They will perform on Friday at The Waiting Room with UUVVWWZ for an HN Presents show, as well as Saturday at The Bottleneck in Lawrence, Kan., and at Maha Music Festival on Aug. 17.

Much like the December show, The Millions’ live efforts in 2013 will be partially motivated by the rediscovery of songs that harken back to a halcyon moment in their history. This summer, Randy’s Alternative Music label released M is for Millions — Sessions, a collection of demo tracks and unreleased recordings (laid down at Startracker Studio and in Los Angeles) from their breakout album in 1991. The official album from Polygram Records, M is for Millions, was unquestionably a success, including their hit single “Sometimes,” which battled U2’s “The Fly” on the college radio charts in 1991-92. But in an originalist sense, the Sessions album embodies the songs the way the band intended.

“This (record) is like a real band; this is more us,” Dingman said.

The band recalls the recording of M is for Millions with an appreciation for the experience, but their creative differences with Rush producer Terry Brown — who wanted the album technically polished (what Amsler calls “sterile”) — have always slightly discolored their view of the album.

“It was the lowest I’ve ever felt creativity-wise,” Dingman said. “The session ended with Terry Brown in not a good way. He wasn’t happy with us being there. We’re a very hands-on band and we wanted to be there for the mixing process, but that couldn’t happen.”

Conversely, the band agrees that M is for Millions — Sessions is authentic to the band a fan would have waited in line for outside Duffy’s Tavern in 1991. Dingman’s guitar and Allison’s voice intertwine in a give-and-take marriage. Amsler’s bass is unabashed in its thumping.

Still, the ‘90s ensemble is not entirely as it was. In this new incarnation of The Millions, drummer Greg Hill is replaced by Brandon McKenzie (The Renfields, Strawberry Burns), who remembers some of his older college friends loaning him The Millions’ albums as a high school student.

“I knew M is for Millions pretty well, but I spend a lot of time trying to get inside Greg’s head,” McKenzie said. “It’s from a time that, now, so many bands have tried to copy. It’s pop at its core.”

The hours McKenzie has poured into learning the songs weren’t so dissimilar from what Dingman, Amsler and Allison all experienced in rehearsals last year. It was that effort and the momentum therefrom, they say, that had a hand in ushering in 2013 shows.

“We already did all the hard work,” Allison said. “I’m totally savoring these songs.”

But unlike Allison — who’s played in a handful of bands (ROck ROse, Lori Allison and Her Philosophers, Floating Opera, Blane and more) since the breakup of The Millions — Amsler taking the stage again was more a stark proposition.

“We didn’t think Marty would do it,” Allison said, explaining how the bassist’s contribution expanded from a three-to-five-song guest appearance to eventually signing on for a 21-song set.

“They didn’t know Marty was having a midlife crisis and he needed to do it,” Amsler laughs. “For me, the best parts of this whole experience is working together to help each other learn the songs or prop somebody up if they’re getting a little discouraged.”

“By the way, I’ve been listening to (Lori) sing for 25 years and she’s never sounded better,” he added.

In revising or rethinking the history of The Millions, it’s both apparent and explicit that time has healed some wounds. Amsler said he doesn’t want gripes or mishandlings to be part of the band’s definition or legacy. But even in saying so, difficult moments rear their heads.

“We don’t want to sound like the promising band that got fucked over by a label,” Amsler said. “Yes, I would love to do it over again.”

“Yes, they didn’t have records at the places we played,” Allison adds.

“OK, yes, they did kind of fuck us over,” Amsler rephrases with a chuckle. “But we learned with it and got an amazing experience that I wouldn’t trade for anything. It is weird to look back and think of what might have been. But who knows? Whatever.”

An important balancing act of the entire reunion experience for The Millions has been leaving the door open for forthcoming opportunities while not overplaying the hand that exhausted them in their early twenties. It’s how they booked shows this summer. And it could be how they’ll approach the possibility of new material going forward.

“I don’t like to ever say never,” Allison said. “This is satisfying what we’re doing, a different gear (than writing).”

“I’m sure in the back of all our minds it would be interesting to see what we could do, but that’s really not what this is about right now,” Amsler said. “This feels really right right now and that’s kind of how this has been all along. If it feel right, do it. If doesn’t, then don’t.”

These days, The Millions tune down their songs, so Allison can cartwheel through them like she wants to. They’re disinterested in pursuing any sort of record deal. Dingman is lifted to exuberance just listening to the long-forgotten demo version of “West.” And while it’s merely emotional speculation to say if time has softened regret, the years have clarified the band’s vision of themselves: as a unit.

“You fight like brothers and sisters, but you’d kill for each other,” Amsler said. “You go through so much together. We needed a little distance. Like 20 years.”

Chance Solem-Pfeifer is Hear Nebraska’s staff writer. This is just the most recent chapter of The Millions. If you want the full adventure with all its tragedy and triumph, you simply have to read Neal Obermeyer’s brilliant story. Reach Chance at chancesp@hearnebraska.org.