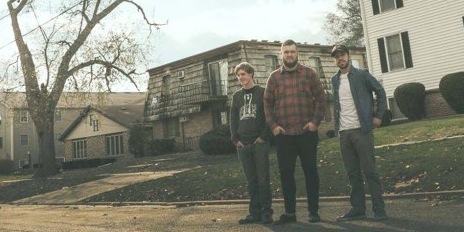 When Mighty Ships’ frontman Tyler Bachman began writing early renditions of “The Coastal Midwest,” the title track for his band’s most recent album, nearly two years ago, he was dealing with the in-betweens — wrestling with the uncertainty of a relationship and life after college.

“I was kind of going in and out of a relationship at the time, so I wanted to capture some of that,” Bachman said. “But also just how I was feeling at the time–not really feeling like I was in one place that was solidified for me. That whole record is kind of about that uncertainty.”

Bachman had just left work at the Galesburg radio station, WGIL, when he sat down with me for a phone call interview. From 400 miles away, he talked through the mind of his younger self– the less developed, but equally hungry artist who just wanted to write music.

Bachman’s enthusiasm echoed through the speakerphone, reminiscing on his journey from past to present. From playing open mics at local coffee shops to performing in front of crowds he never imagined, Bachman has watched Mighty Ships flourish from a simple idea into a full-fledged emo/punk-rock three-piece.

The Illinois-based singer/songwriter and full-time news director started Mighty Ships as a solo project in 2013. After leaving the beach rock band Printer’s Row, Bachman formed Mighty Ships out of the desire to do something different, emulating the sounds of his emo idols, including Manchester Orchestra, Jawbreaker and Into It. Over It.

After their release of The Coastal Midwest with DIY record label We’re Trying Records last September, Mighty Ships has been making waves. From visiting Knoxville, Tennessee to Lawrence, Kansas to making sure to stop at every Waffle House in sight, the group has gained unprecedented support along the way.

“It’s cool to see that it [the album] resonates with other people,” Bachman said. “I think that’s what music is supposed to do.”

Best known in the Chicago area, the trio will be coming to Omaha’s Milk Run Saturday, Jan. 23, accompanied by labelmates Super Ghost, along with Secret Stuff and The Foxery (RSVP here).

The Mighty Ships show will be an introduction between Midwesterners. The Coastal Midwest is a staple of Bachman’s life. Beginning with heartbreak in “Tom Waits,” and ending with acceptance in “Richmond, VA,” the album embodies everything it means to be 20-something and afraid.

“‘Richmond, VA,’ that last song on the record, it’s just kind of a release,” Bachman said. “That whole record was kind of a capturing of my last year of college.”

The lyrical progression of this record moves from regretful ballads to face-smacking sentences and eventually a slow-swaying anthem that confidently screams, “you can’t admit that you’re wrong but that’s you are.”

Mighty Ships leave its listeners with a memorable sentiment when Bachman sings, “it’s safe to say that I’m finally looking out for myself,” concluding The Coastal Midwest with an equal sense of hope and defeat.

Bachman says he’s moved on from a lot of the things he was writing about during the time of this album. Today, he looks back on the record with ease, a true sign of acceptance, growth and artistry.

“The end of the record is talking about moving on, getting to that point where you’re trying to start again,” he said. “I can’t help but smile every time I listen to it.”