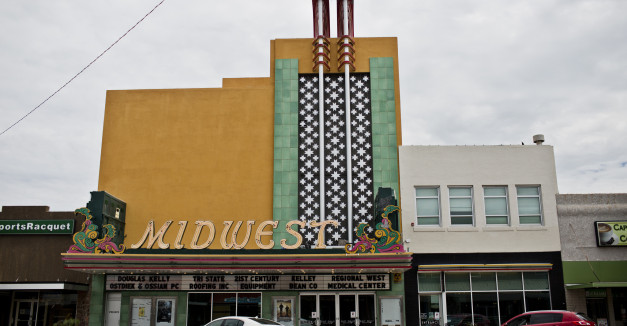 On a crystal clear Monday afternoon, the Midwest Theater towers over Broadway Street, at the center of downtown Scottsbluff. Built in 1946, it has stood as a beacon of the arts in the community for more than 70 years, playing host to all manner of programming: from musical theater and stage performances to classical music and Thursday night family movies.

“To me, it’s the pivot point, the eye-catcher, the anchor of downtown,” says Billy Estes, executive director and programmer. Sitting at the front barrier of the theater’s 319-seat balcony, Estes, 31 (and today, tour guide), explains the history of the theater and its growth through the years. He starts to say that it has become an integral part of the community, but catches himself on the timeline.

“It’s always been a part of the fabric of the Scottsbluff community,” Estes says.

At the top of that balcony, eight feet to the right of the projection booth — which houses a pair of 35mm projectors Estes drove to Las Vegas to retrieve — there’s a hidden door and a peek at the historic Scottsbluff landmark’s past. 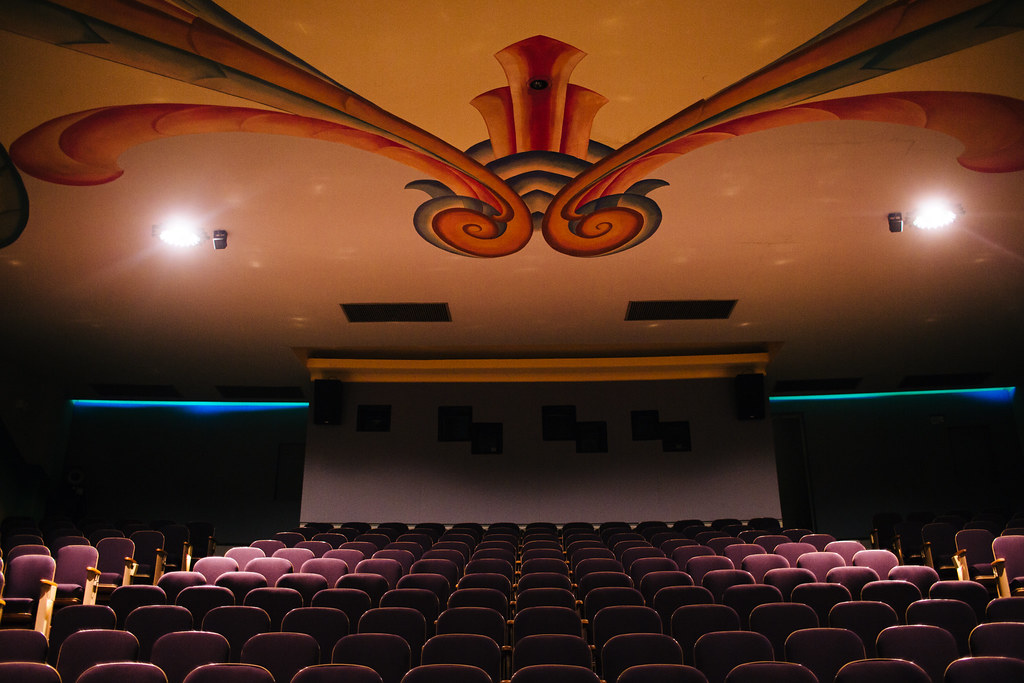 Through that hatch hangs a semi-treacherous steel ladder to the space between the lobby and upper deck. Across the barren rafters, over a crudely constructed catwalk, a piece of mural is still painted on the wall. It’s dusty and faded now, but you can imagine crisp green palm trees, opal waters and hot sand that still show faintly under all the grit, a remnant of charm from its days as the Egyptian Theater.

Opened in 1941, the Egyptian Theater served a brief stint as hot spot for vaudeville and cabaret performances until a fire destroyed it in 1945. It reopened the following year as the Midwest Theater.

The theater has long since blossomed into the community mission-based space it is now. Estes assumed full time executive director duties in July 2013 after a decade serving as a maintenance person and light operator. He says the theater also serves as a community gathering space, with everything from lectures to ACLU rallies.

In 2007, the theater expanded into the adjacent office space, just north of the marquee, to create a new lobby, snack bar and ticket window. The women’s restroom of the Egyptian still exists around the corner, complete with powder room and loveseat.

Enter the theater space, and the first eye catcher is the decor, swirling to the ceiling from the front of the stage like jets of ocean spray. Multicolor lights bathe the walls and backlight the stage. Every single one of the 729 bright blue seats are visible from all points onstage. Estes says that is one of the best and most common compliments he receives from performers: every face of the crowd is visible.

The same is true from the other vantages. There isn’t a bad seat in the theater, even from the balcony. In fact, some views — like of the Juilliard-trained, five-deep piano ensemble The 5 Browns, which played there in September 2013 — are more complete from the top. 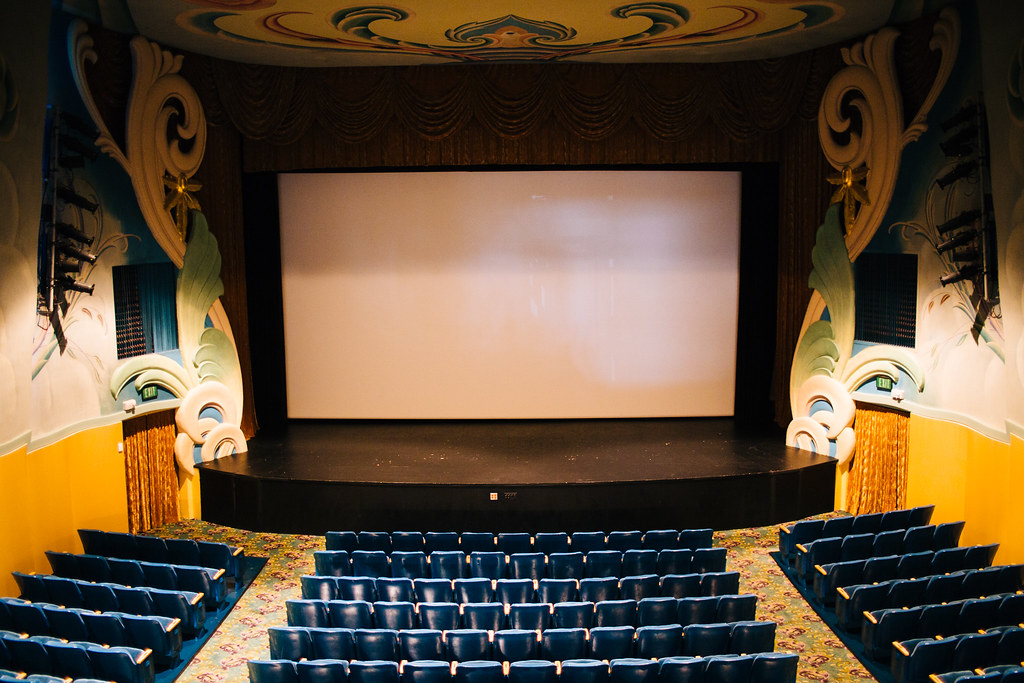 “Who wouldn’t wanna spend some time in here with their sweetheart [and] see a show?” Estes says incredulously. He and his kids came in a few days before and watched Avengers: Age of Ultron, ahead of their weekend screening.

The summer blockbuster earned the second-largest-ever domestic opening at $187.7 million. Here, they did horribly with it, probably because of the weather. Warm weather draws, such as the Platte River or nearby Minatare Lake, can detract from summertime attendance. It was only recently that the theater was open more than once a week.

But then, the Midwest Theater isn’t really built on the backs of the mainstream Hollywood movie cycle. Sure, film is a significant part of their programming schedule — Estes is particularly fond of their documentary series — but the theater also commits to bringing quality, affordable entertainment in music, theater and dance. This is true right down to the building’s acoustics, which embrace excess sound and natural reverb instead of stifling it.

Estes’ recent promotion gives him more control over programming, so he’s also strived to book some experimental or unconventional acts as part of a popular series to spice things up. He cites avant garde cellist Zoë Keating and Brazilian-bluegrass fusion group Matuto as examples. He likes to package these into the winter concert series with more mainstream acts.

“You’re gonna buy tickets to the series and then see this really weird show that Billy found,” Estes chuckles playfully. 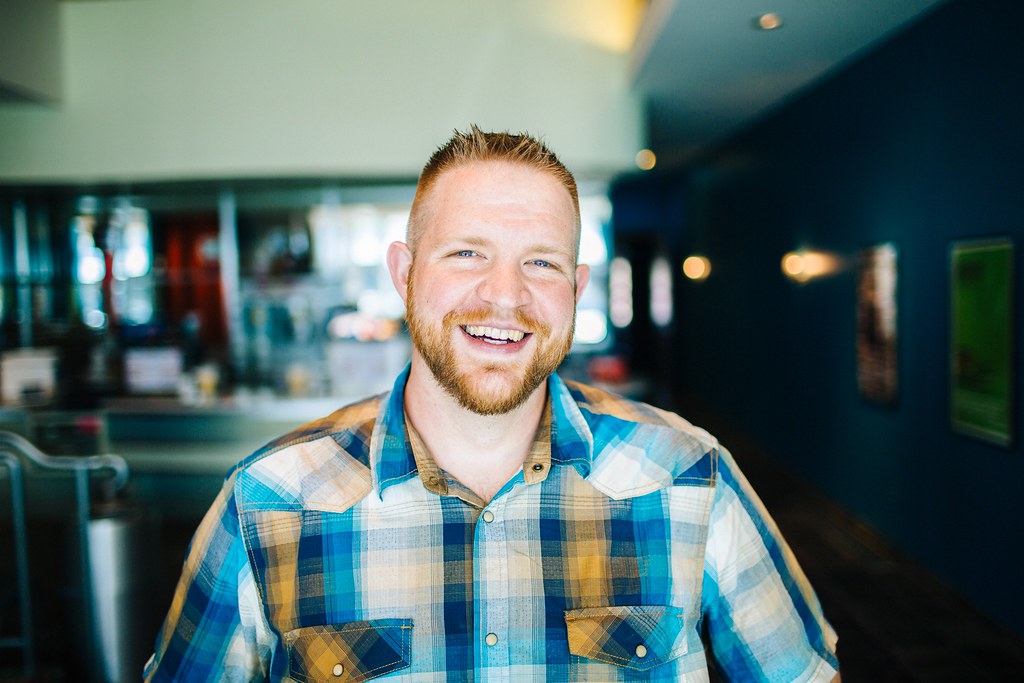 All of this would be moot were it not for the theater’s patrons and volunteers. Estes says the theater relies on its donors and regulars, but also on what last year would have been more than $100,000 in payroll — given in volunteer labor.

“We wouldn’t have been able to turn our lights on,” Estes says. “[Volunteers] are very valuable to us. They really are, to me, our ambassadors in the community.”