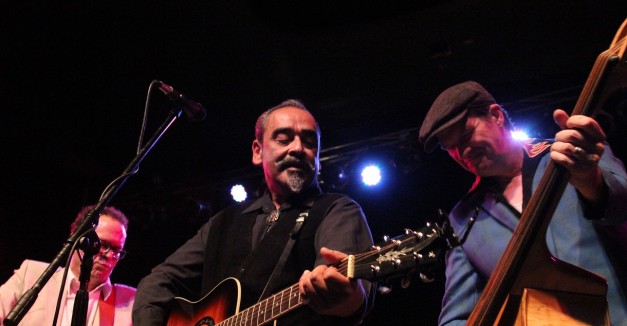 Through numerous lineup changes and nearly two decades of experience, The Mezcal Brothers have remained staples in the Lincoln and Nebraska music scene.

The quartet of familiar faces will bring their rockabilly sounds to the corner of 13th and O streets on Friday for Hear Lincoln.

The roots-rock band has existed since 1998, performing their upbeat, polished tunes for numerous crowds both locally and nationally. Originally started by Gerardo Meza and his brother Tony, the band’s members have shifted throughout time while adding new sounds and instruments to the group. Currently Mezcal Brothers comprises Meza, guitarist Benny Kushner, bassist Charlie Johnson and Shaun Theye on drums.

In anticipation of their Hear Lincoln show, Mezcal Brothers’ frontman Gerardo Meza answered questions on the origins of the long-running band, his early musical memories and the culture of Lincoln.

Hear Nebraska: What was your first public show in Lincoln and how did it go?

Gerardo Meza: The first public show as The Mezcal Brothers was back in 1998, at Duffy’s. I think we were well-received, people actually dug what we were doing.

GM: The main difference is the lineup. Back in ’98, it was just me and my brother Tony. I played guitar and harmonica and sang, while Tony played drums. We’ve evolved quite a bit since then. Tony actually left the band a couple of years later. By then, we had established a four-piece ensemble consisting of two guitars, stand up bass and drums. There have been various members filling those spots throughout the years. The lineup I have now has been with me for at least 10 years.

GM: My earliest musical memory would have to be in kindergarten or first grade.  The teacher would always have me play the maracas, or some other Latin percussion instrument, when we were allowed to play music in music class.  She never let me play anything else,  I guess she figured it was the only thing I could play since I was Mexican.

HN: In that Hear Lincoln is a downtown, day-time event, we want to ask … do you think there is a disconnect between Lincoln’s creative community and business community? If so, do you see a solution?

GM: I think it’s very common for most communities to have a slight disconnect unless the business part is in the business of being creative or the creative community is creative about doing business. I think there will always be that separation to an extent, which is fine. I feel the Lincoln community has made great strides in this area: just look at the Haymarket development, and the many festivals throughout the year. Lincoln has embraced a culture of creativity which is now more available to the public.

GM: I feel the most important piece of constructive criticism which has helped me throughout the years as a musician and songwriter is to never compare yourself with anyone. Be true to yourself and express it with confidence. Always be passionate with every creative project you pursue and always be committed to the truth.

GM: There are way too many talented people here in Lincoln and in Nebraska to choose from. It would be impossible to pick one song from the pool of worthy musicians in the area.  Do yourself a favor, and listen to everything this great state has to offer, you’ll be surprised in what you’ll find.