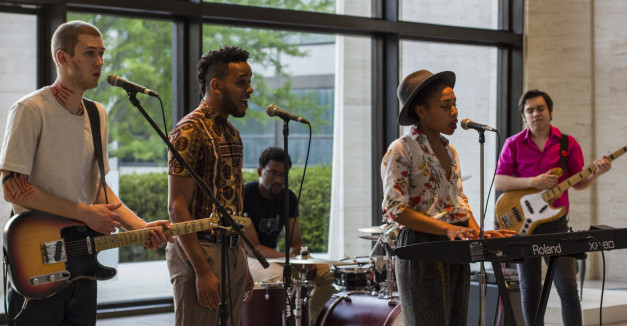 In a music community like Lincoln’s — anchored partly by a university and with hoards of musicians with multiple projects — the scene’s most nameable acts can change in a moment.

Last fall, few in the downtown music crowd knew what Mesonjixx was. In the last six months, playing at an almost weekly clip, Mesonjixx has become one of the city’s most noticeable acts. And the soul/jazz group’s musical accessibility and live show exhibition has everything to do with that evolution.

Singer-songwriter Mary Lawson’s songs are soulful and vulnerable-feeling, written with in a vocabulary both deft and universal to love songs. The band behind her of Myles Jasnowski (guitar), Joshua Barger (bass) and Kekeli Dawes (drums) is a murderer’s row of Lincoln instrumentalists under 25. Singer VJ Herbert, who plays in Lawson’s other project, Xion, has also been performing with Mesonjixx recently.

We talked to Lawson before Mesonjixx takes the Hear Lincoln stage Friday at Tower Square. The event is presented by the Lincoln Chamber of Commerce, sponsored by the Cooper Foundation, with media support from KZUM.

RSVP here. See you on Friday.

Hear Nebraska: Between Mesonjixx and Xion, you’ve probably played upwards of 20 shows this year already. Both projects debuted last year, right? Was it always in the cards to play so much, or has the local response made that possible?

Mary Lawson: It definitely has more to do with the local response, and the support from the community. I’m not quite certain this type of momentum with opportunities to share would have happened anywhere else, and I don’t like thinking of whether or not it would — we’re here now and I’m thankful everyday.

HN: Between the two projects, you also seem to relish in harmony singing. Do you have a background in group vocal performance?

ML: Yes! I was fortunate enough to have been taught by some of the best choral directors in the Midwest.

Joni Osborn was my choir director at North Star High School. It was her encouragement and love for music and teaching that kept my motivation intact for my post-high-school interest in choral groups. Kurt Runestad was my choir director at Doane College (Crete), and someone who like Oz (Joni Osborn) that influenced my love and passion for music sung in harmony. They both are incredible teachers. I can’t thank them enough … this blurb isn’t enough, but I have to speak of them because they deserve much of the credit, as to where I am as a music doer.

I should also mention that for a year I was in a gospel choir that VJ [Herbert] directed, my freshman year of college at Doane. That experience also played a huge part in my confidence as a singer.

HN: One of the joys of watching Mesonjixx is seeing Josh and Kekeli communicate with their eyes and improvise parts. How much of a sense of that do you get during a live show?

ML: Oh, watching Kekeli and Josh is funny as hell. The three of them really, because Myles gets into it too! During the set, it’s a privilege to have moments where I get to stand and listen and in a sense, become a part of the audience and experience the music that way. It’s an honor to play with those three, I won’t ever get tired of saying that.

HN: Logistically, what does Mesonjixx’s lineup look like when Josh is on tour or out of town [with Josh Hoyer and the Shadowboxers]?

ML: We’re actually getting in some practice time with a sub bass player this week. When Josh is out of town, we miss him, but we’ve got to make something work. Seeing him out there and doing what he loves, fires us up to continue on and of course we’re excited when he’s back in town!

HN: What should Hear Nebraska’s audience keep an eye/ear open for from Mesonjixx in the near future?

ML: The Hear Nebraska audience can keep their eyes and ears open for more.