[Editor's note: This Q & A previews The Menzingers' concert on Saturday at Slowdown with Hot Water Music and La Dispute. Doors are at 7 p.m. and cover is $20.]

Let's review the ingredients of a punk rock song: an up-tempo drum beat mixed with fast, driving power chords and vocals that seem to be more yelled than sang with a touch of youth.

It sounds simple in theory, but the real trick is stacking the energy of these seemingly simple features into something coherent and tight that hits you in the face with emotion and passion like a damn fire hose. Pennsylvania punkers The Menzingers have been wowing listeners and building a dedicated fanbase since their first demo in 2006 by doing exactly this. 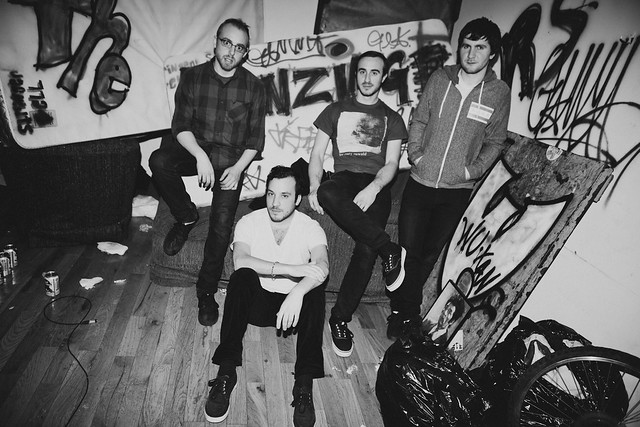 All good artists pour pieces of their personalities into their work, and The Menzingers are no exception. I had the opportunity to speak with guitarist Tom May, and could immediately tell where the band gets its high-energy, high-tempo, ecstatic sound —  the kind that makes you smile, dance and jump uncontrollably. This feeling is more than just what fans do at their shows, it's a metaphor for how these guys live their lives.

I was impressed with May's enthusiastic, yet calm and humble outlook on where the band has been, where they are now and where they're going in the future. When I reached May, he was in the back of the tour van in the midst of another rigorous drive between shows. The band is touring with punk essential Hot Water Music and the Michigan post-hardcore outfit La Dispute. The three groups played Chicago last night and will play Minneapolis tonight before it's on to Omaha's Slowdown on Saturday. To say there's a bit of a drive between sets is an understatement:

Tom May: We’re en route to Chicago from Kent, Ohio. We stayed there last night after playing in Pittsburgh. This is the stretch of the tour full of somewhat difficult drives, but it’s nothing we’ve never done before.

This tour we’re trying to eat the food that’s famous to the area, like if there’s some sandwich place everyone’s like, "You totally gotta go there," we’ve been doing that. We’re definitely going to have some hot dogs in Chicago and that’s something we’re excited about. Then, what do they have in Minneapolis, Juicy Lucys? It’s like a cheeseburger filled with cheese inside the patty.

What’s good in Omaha? Isn’t there something they’re famous for, like steaks?

HN: It sounds like you guys have some long drive-times in your future. What are you listening to right now?

TM: Everything, man. Like yesterday, I listened to Tegan & Sara’s new record. Today, I’ve been putting some songs together for my friend who lives in Washington D.C. and hasn’t been that into new music for the last like five years, so I got him to download Spotify and have been working on links for him all day.

I got some Static Radio NJ on there, some Regina Spektor, little bit of Arcade Fire, but I’m coming up with some good things I think he’ll be excited about. That’s kind of what I’ve been listening to today. 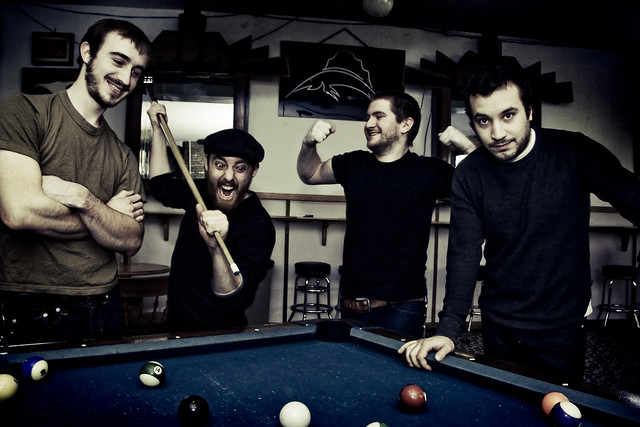 HN: So you’re not keeping it exclusively punk. How much punk makes its way into your playlist?

You know, we’re in [the van] for so long, and it’s just the longest part of our day. We gotta keep it different.

HN: Yes, as I’m sure you’re aware, the interstate drives can get pretty long from place to place in the Midwest. You gotta keep your mind occupied.

TM: Yeah, I’ll just throw on headphones and listen to Pandora a lot of the time. But then we also have times when the radio’s off and we just talk, that’s something we do quite often, too.

HN: I heard you’re also a fan of Desaparecidos.

TM: Oh, man, I love them so much. I didn’t get into them until very recently, probably like two years ago, and I absolutely love them. They’re fantastic. One of my friends showed them to me.

What I find so attractive about their music is that it’s really gritty. Very emotional. The way they construct their melodies and use instruments is very interesting, and I also like the lyrical content; how it’s political and socially relevant. It really hits close to home and I really like it.

Now I’m a Bright Eyes fan, too. I really like The People’s Key and I’m Wide Awake, It’s Morning; those are my two favorite albums of theirs.

HN: Are you guys learning a lot from touring and playing with bands who have been around and stayed relevant for years, like Hot Water Music?

HN: A lot of people associate punk rock with angry, angstful people, but you guys manage to keep a positive outlook on things. Anyone who reads interviews you’ve done can see that you’re a positive and humble dude. Do you find it’s a hard attitude to have in the punk rock community?

TM: It’s actually quite the opposite. Looking at punk rock over the last 30 years or so there’s definitely a lot of aggression and angst, but as far as the community goes, everybody’s in it together. The egos aren’t really there like they used to be. There are some, but for the most part everybody’s just in it together.

That’s where the positivity comes from, you know, instead of having a competitive type of scene, we help each other no matter what kind of punk were playing. You know, you see these hometown scenes where everyone meets up from different cities. It’s a great atmosphere. Then you think about how this anger comes from wanting to make changes and how the nature of these changes is positive. 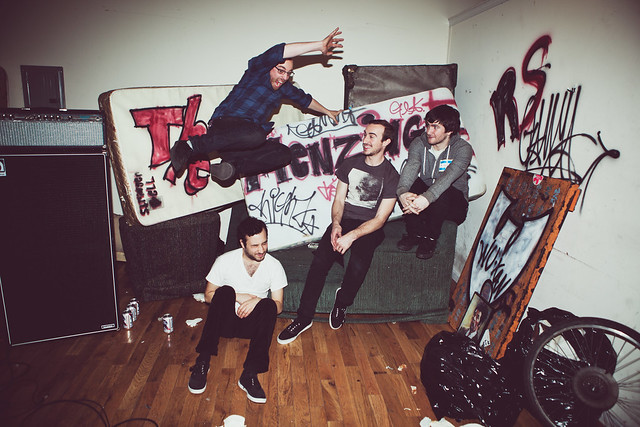 HN: Do you find maintaining a positive attitude gets difficult when you’re on tour spending most of your time cramped in a metal box on the interstate?

TM: It does get more difficult the older I get, just sort of by default (laughs). You just see more and more bullshit, but you kind of get over it. It’s like, "Fuck this, man, I’m fucking jaded." But no, it is tough sometimes to do that when you’re in a van for such a long amount of time, but then you think, at least I’m not at home doing something I don’t want to do.

This is something I want to do and have always wanted to do at this point in my life. Doing what you want and being in charge of yourself, it’s really hard not to be positive about that.

HN: Where do you guys want to take the band in the future? Are you working on anything new?

TM: Yeah, after this tour we’re only doing weekends for the spring because we’re writing a new album, so hopefully we can get that wrapped up this year. We just spent so much time on the road this last year that we need to spend some time at home doing some writing. We can’t wait for that.

HN: I’ve read that a lot of your writing comes from the feeling you get from your home area.

TM: For sure. A lot of the songs we’ve written were about the area we grew up in northeast Pennsylvania, which is Scranton. Now, we moved to Philadelphia about four or five years ago, and every time we go back to Scranton it’s like, I don’t know if it’s nostalgic. It’s more trying to relate what the world has actually become compared to what we thought it was going to become when we were living there.

So we thought it was going to be one way and now we’re realizing it’s a different way. Reconciling that is where a lot of the lyrics come from.

HN: Our readership has been into you guys since the Love Drunk “Irish Goodbyes” video dropped last year.

TM: That’s my favorite song to play live, it’s so much fun. For this video, they showed up a couple days beforehand, and we were looking at a rooftop to have the Philadelphia skyline in the background, but the times weren’t working out right. So we knew this house, it’s called Ava House and there’s actually a song about it on the record, and we just kind of went in there and all came up with the idea together and just grabbed a case of beer and made it happen. It was so much fun.

#33 The Menzingers: Irish Goodbyes from Love Drunk on Vimeo.

HN: You’ve toured with all these great and influential bands, like Bouncing Souls, Propagandhi, Against Me! and Hot Water Music, among others. Who have you toured or played with that would make your 16-year-old versions soil themselves with excitement?

TM: Every single band we’ve toured with so far, honestly. Anti-Flag was the first band who took us out on tour, Gaslight Anthem was awesome. Every one of those bands has been fantastic. We went on tour with the Swingin' Utters and did a couple dates with NOFX, which was just ridiculous and pretty awesome.

HN: That’s quite a lineup. If you could play with one band who you haven’t gotten the opportunity to yet, who would it be?

TM: Rancid because they’re fucking awesome and were the first punk band I really, really got into. I remember walking home from middle school with my friend Nick listening to And Out Come the Wolves for the first time and I was, like, "AWESOME," and just got so into it. It was funny because at the age I was, the first copy we had we just downloaded the songs individually off the internet and they were in the wrong track order.

HN: Ahhh, the days of Kazaa and Napster P2P sharing.

TM: Yeah, definitely from Kazaa or like Soulseek? I don’t even remember. My pirating days are long since over, but it was fun.

HN: You were quoted on another blog saying one of your favorite things about being in this band is that you guys get to travel so much and see places you’d normally only see on a map and comparing the perception to the actual experience you have. What were or are your thoughts on Omaha as an east-coaster?

TM: I love Omaha. All I knew initially was that 311 was from there because we were fans growing up, and then I also loved all the Saddle Creek bands and The Faint. But I had no idea what to expect coming to Omaha.

Of course, there’s the stigma of being smack in the middle of America, so it’s probably just cornfields and the most American stuff or whatever, but it’s actually a thriving and awesome scene. I like it. Everyone I’ve met there has been so cool.

HN: Awesome. Anything else you want to let our readers know before the show Saturday?

TM: Not that I can think of, just get there early because we play first (laughs).

Bryce Wergin is a contributor for Hear Nebraska. His preferred hot sauce is Tabasco. Reach him at bwergin2@gmail.com.