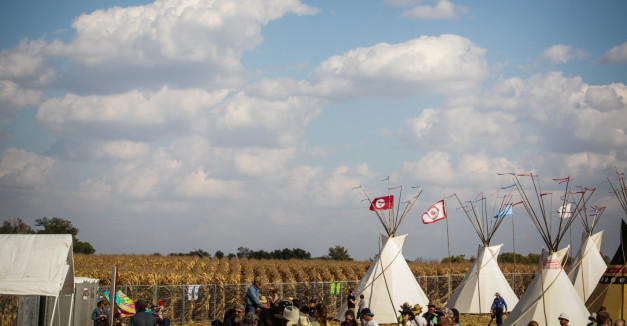 To encapsulate 2014 as best we could, we asked nearly two dozen Nebraska musicians, journalists and scene figures about their favorite albums, songs, shows and events of the year. Catch up on the other categories and keep an eye out throughout this week for more reflections and predictions from this crew.

In this installment, they tell us about the shows from 2014 that will stay with them forever.

Mari, Monica and Rachel cornered me at The Sydney one night to ask me to play a house show (which turned out to be AYGAMG’s first house show). Apparently Mari’s cousin was supposed to do a project — I believe for a gender studies class — and he wanted to put together some sweet feminist shenanigans. There were a lot of good things discussed that night that stayed with me, and I don’t know that I really have the words for it (or the space for all the things that were left swirling around me after it), but I do know that I learned just as much as the wisdom I imparted. It was an awesome night of give and take and understanding, and the music was pretty bomb, too.

Afghan Whigs at The Waiting Room

There were a few top shows for me this year. Maha of course was fantastic, Future Islands put on a great show, and seeing War On Drugs perform this year was a treat. To see Greg Duli and the Afghan Whigs back in great form and doing a straight rock show supporting a solid comeback album was my favorite though. Duli was in the best form I have seen him in and the set-list was fantastic. That show just took me back to what rock shows once were and I wish were again. 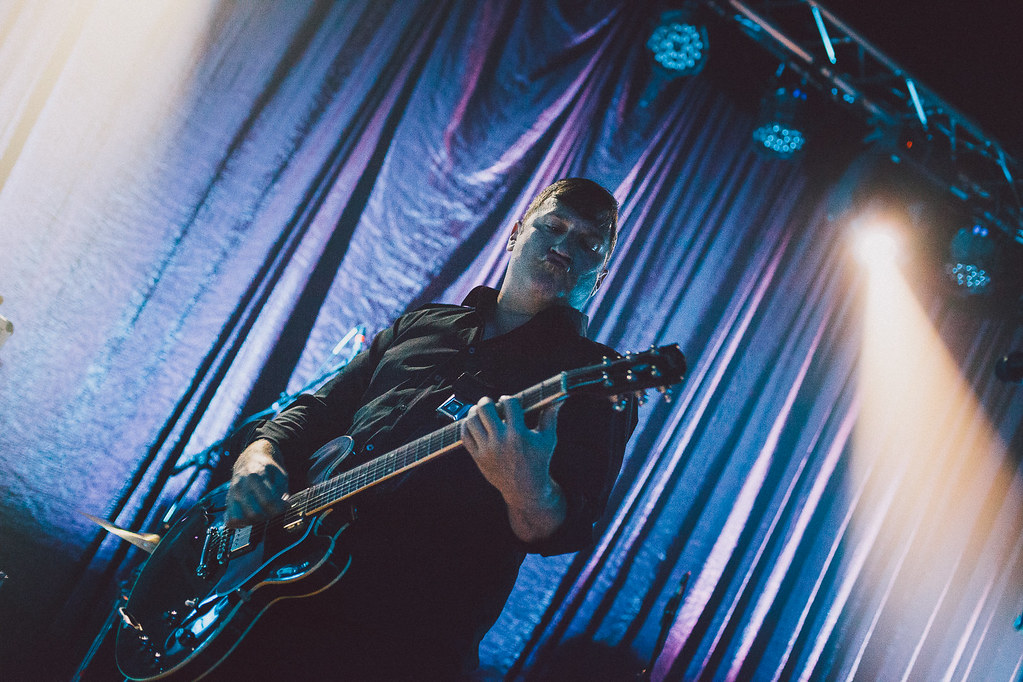 Juicy J and Travis $cott at The Bourbon

Juicy played all the hits but Travis $cott really lit up the place.  A quiet talent in Kanye’s crew, $cott has been both producing and rapping his way into the limelight but it’s his live presence that blew me away. Halfway through his set he jumped into the crowd and surfed to the bar while still rapping every lyric. He took to the bar using it as a second stage running back and forth around the circumference of the bar interacting with patrons and bartenders alike. He didn’t miss a flow as he crawled into the sound booth and up into the balcony igniting the whole Bourbon into a frenzy.  Before stepping on my shoulder to get back to the bar and then surfed back to the main stage and finished his set.  I haven’t seen the Bourbon that electric since LMFAO played there in 2009. Runner up was JSTJR at Vega in May.

Honestly, I didn’t attend very many shows this year.  So as cliche as it may sound, MAHA was a great highlight for me this year. I got to see Radkey (who were amazing), the Head & the Heart and Death Cab for Cutie (who are one of those “bucket list” bands for me).  Plus my kids are a little older now so we took our kids for most of the day (which was really fun). 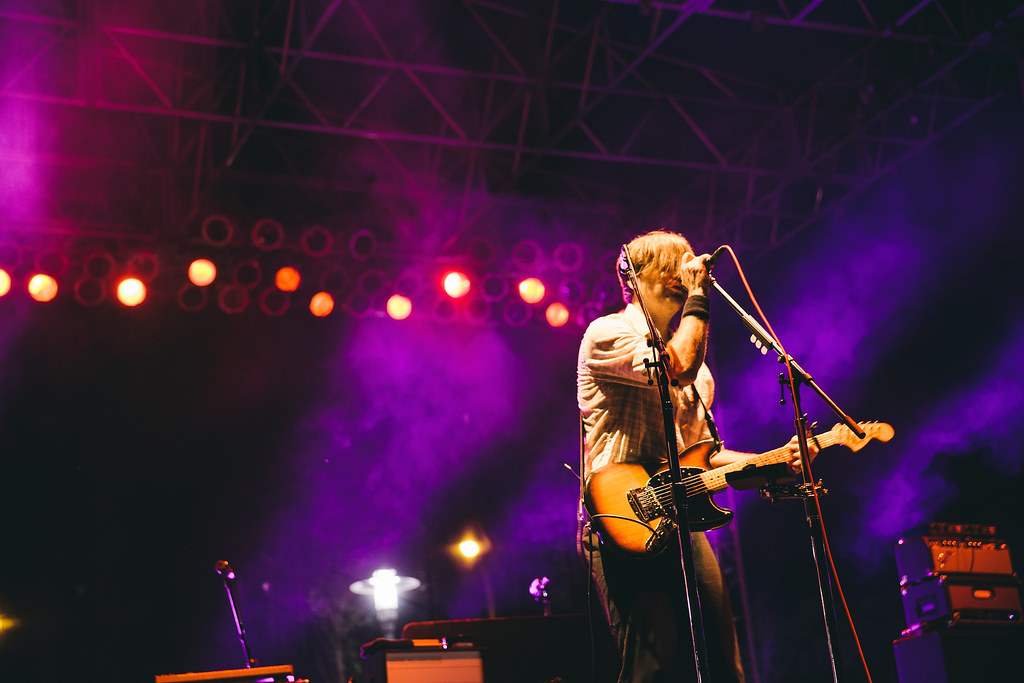 The Family Crest at Slowdown

I went to the Slowdown to see Mother Falcon and ended up being blown away by the opener, The Family Crest. This band of seven acts as a miniature orchestra with Liam McCormick’s captivating vocals accompanied by trumpets, guitar, flute, violin–the list goes on. There is so much talent emanating from this group and they definitely deserve a listen.

Gov’t Mule at The Bourbon

By far, the most memorable show this year for me was Gov’t Mule at The Bourbon. Kudos to Jeremiah and the gang for getting those guys here. They packed the house and didn’t disappoint. As a die-hard Mule fan, I’ve seen a lot of shows. They always play their asses off (no pun intended), but it’s a special treat to see your favorite band on your own turf – especially when there’s usually a lot of driving involved. On top of that, it was fun to share the experience with friends. I got to hang out with friends I’ve made through the Mule, friends who shared my excitement for the event, and friends who just had to check it out because I wouldn’t stop talking about it. Without a doubt, I’ll never forget that night.

David Nance at The Middle House

Everything collapsed on itself. [Buy] his 3 tapes off Unread or at Almost Music. There’s a great LP for sale there, too. It’s called “Actor’s Diary.”

There were a few pretty incredible international industrial/goth shows that happened in Omaha this year that were surprising to see come to Nebraska.  I think the most memorable show this year to me happened to be the Grendel / Ludovico Technique show at the Hideout.  I was super impressed with the light show that these bands had brought with them, and how they were able to make the venue look like a totally different place, giving it a total concert feel.   Grendel came from the Netherlands and played a super high energy harsh EBM set to a room full of people dancing and freaking out.  Ludovico Technique did this sort of androgynous Marilyn Manson-esque performance that I could not take my eyes off of.

Willie Nelson and Neil Young at Harvest the Hope

Those who missed it, who heard about this concert in a Nebraska cornfield in passing afterward, they must have prioritized its headliners. And understandably so. The great efforts of Bold Nebraska deserve commendation for assembling this show led by two incredibly important musicians. They worked quickly, and along with hosting a stellar lineup, presented their case against the proposed Keystone XL pipeline well. But one takeaway for fans of Nebraska music? Our bands perform at a level right up there with the best in the world. A hearty round of applause for Jack Hotel and The Bottletops, Dr. John Walker and Root Marm Chicken Farm Jug Band, McCarthy Trenching and those who joined Neil Young for an issue-specific version of “This Land is Your Land.”

How could I not answer with Harvest the Hope?  Back in September, Jack Hotel went up to the Tanderup farm in Neligh, NE with a troupe of friends (including Root Marm Chicken Farm Jug Band, the Bottle Tops, McCarthy Trenching and John Walker) for the almost certainly once-in-a-lifetime opportunity to share a stage with Neil Young and Willie Nelson.  The event was in protest of the Keystoke XL pipeline and brought together farmers, landowners, Native American tribal leaders, musicians, artists, and activists of all types.  To write about the event is to traffic in understatement.  Seeing friends on a stage built specifically for this event, on land crossed both by the proposed route of the pipeline and the Ponca Trail of Tears, with Neil and Willie, singing “This Land is Your Land” with a crowd of 8,000 people–that wasn’t just emotional, it was historic.

Typhoon at The Waiting Room

I saw Typhoon at the Waiting Room in April and I’m still not sure why I get chills when I remember. The 11-piece band doesn’t make simple music, but the performance was pure. It was a band that surprised its violinist with candle-lit cupcakes for her birthday and encored with a pounding unreleased extension of an old track.  It was a band that fondly remembered Nebraska and an audience that remembered the band. It was a rare show where the sincere exchange of music and gratitude was enough to leave sweetly satisfied. 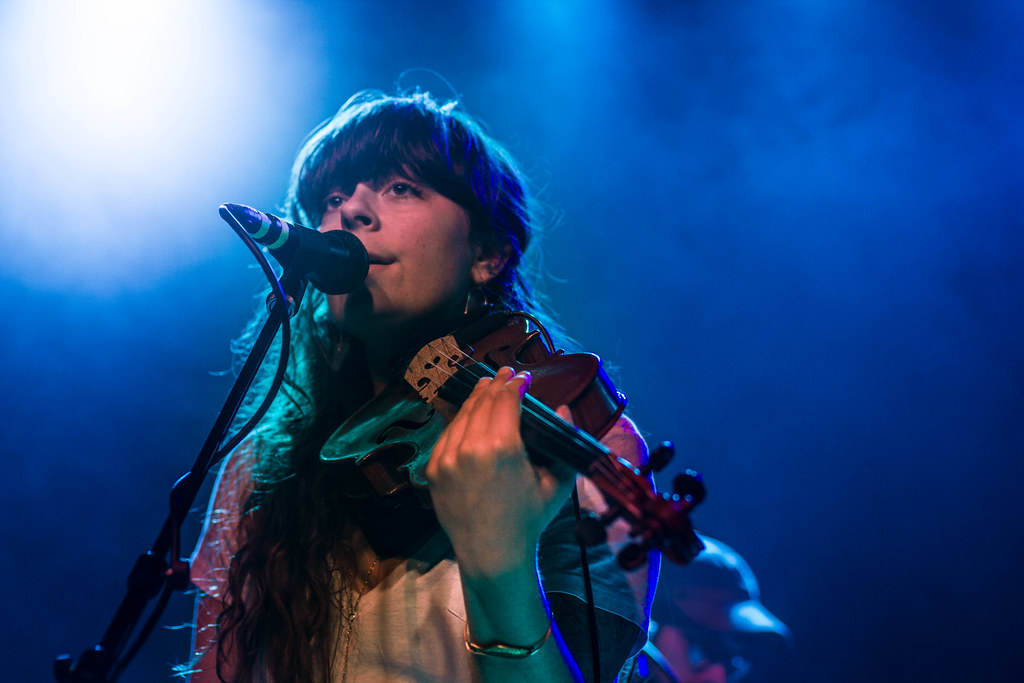 The Justin Timberlake show in early February was possibly the best show I’ve ever witnessed in my life. I have never seen anyone work so hard for so long. He is easily the most amazing entertainer of my lifetime.

How To Dress Well at The Waiting Room

Tom Krell is one of my favorite people in the world.  On stage he has this air of confidence and sure-footedness that just sets you at ease. His voice paired with synths and an r&b framework all on display in one of the most fitting visual displays I’ve seen made for my favorite show of this year. 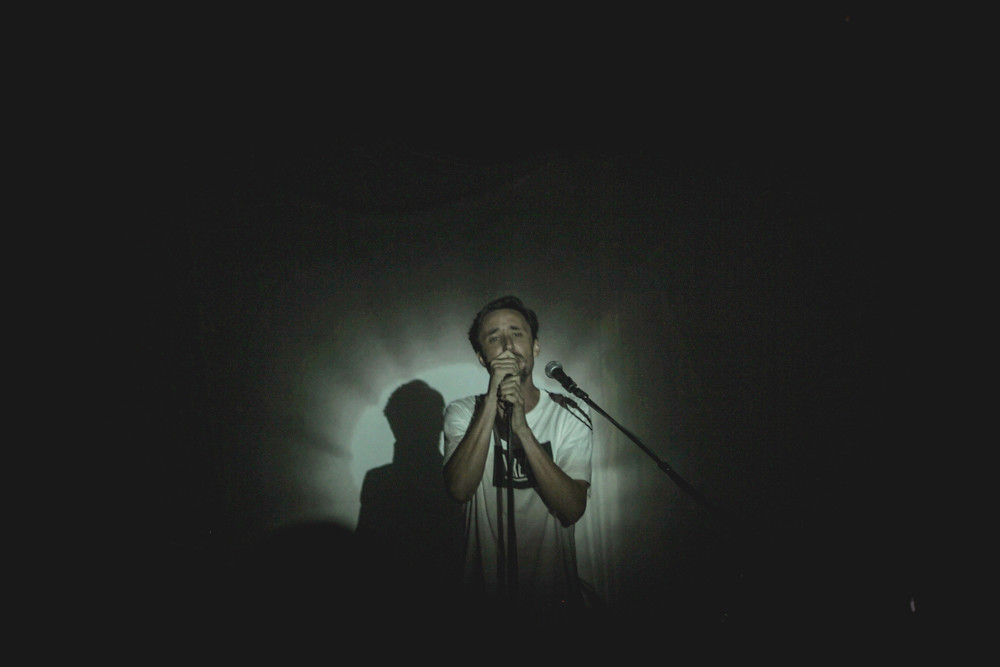 While I’ve seen some amazing shows this year, Deleted Scenes was a milestone concert for me. I, a humble concert photographer, was asked to shoot their secret show at O’Leaver’s, requiring me to drive through the April sleet on a weeknight for a band I’d never heard of in a bar where I was not of legal age to drink. Naturally, I agreed. 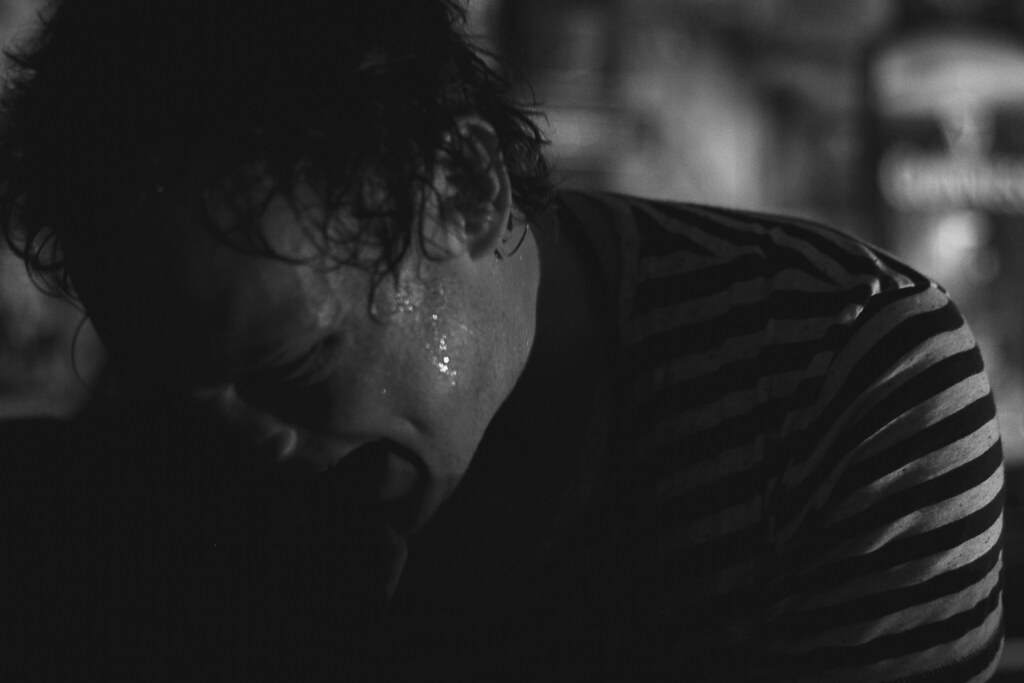 Surprises happen at shows all of the time, but there isn’t anything quite like the wild performance art that is Gloom Balloon. Aside from the few who were familiar with the theatrical pop duo’s wild live performance, most were surprise-treated to an all-encompassing experience. It completely shattered the barrier between audience and artist; they serenaded individual members of the crowd, lifted one person into the air like a crowd surfer, and caused general disorder, all against the backdrop of bizarre pre-recorded videos. It was an ambush of sorts, but a welcome one. 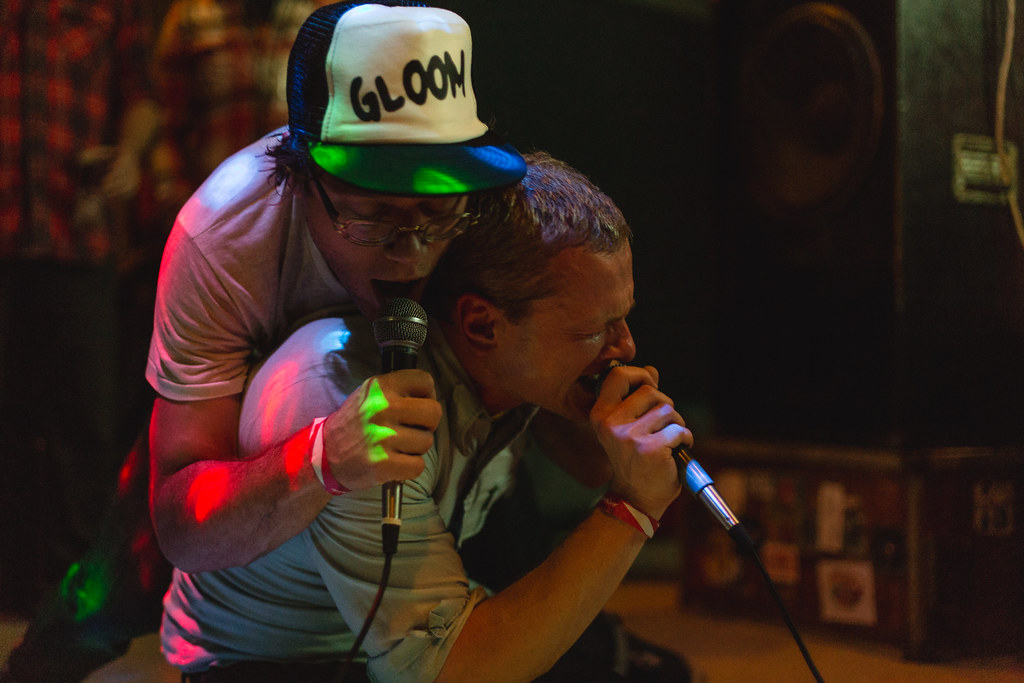 Eros and the Eschaton played at Duffy’s sometime early on in the year. They were accompanied by Matt Arbeiter on drums and Ben Zinn on guitar. Top notch musicianship paired with Adam and Katie’s wonderful writing. Can’t go wrong with that. Also, the Nick Semrad jam at the Zoo this fall. That dude is pretty good at keyboards.

2014 was a year that saw Nebraska being visited by the two remaining Beatles and a relative of a third Beatle. Paul McCartney played the Pinnacle Bank Arena in Lincoln on July 14th, and Ringo Starr played Omaha’s CenturyLink Center on October 5th.  Both of them still sound like they’re in their 20s when they sing, and the way they interact with the crowd makes it obvious that they’re having a lot of fun doing what they are doing and aren’t just playing music for money.  But the show that seems to have been overlooked as far as I’m concerned is the show that Sean Lennon’s band, the Ghost of a Saber Tooth Tiger, played at the Waiting Room Lounge on May 28th.  Lennon also interacted well with the crowd, and this show was meaningful on a personal level because I had the pleasure of chatting with Mr. Lennon for nearly 15 minutes after the show.  Little did I know that a month and a half later, I’d have the pleasure of meeting Paul McCartney just before he played in Lincoln.  But even if I hadn’t met Lennon and McCartney, the shows would’ve still been unforgettable because their bands really put on energetic shows, as was the case with Starr.

I’ve been loving the //FITNESS nights that have been taking place up at Sweatshop Gallery curated by Tom from Routine Escorts. It’s usually electronic based musicians. Interesting mix of folks attend, feels like nothing else happening around town. 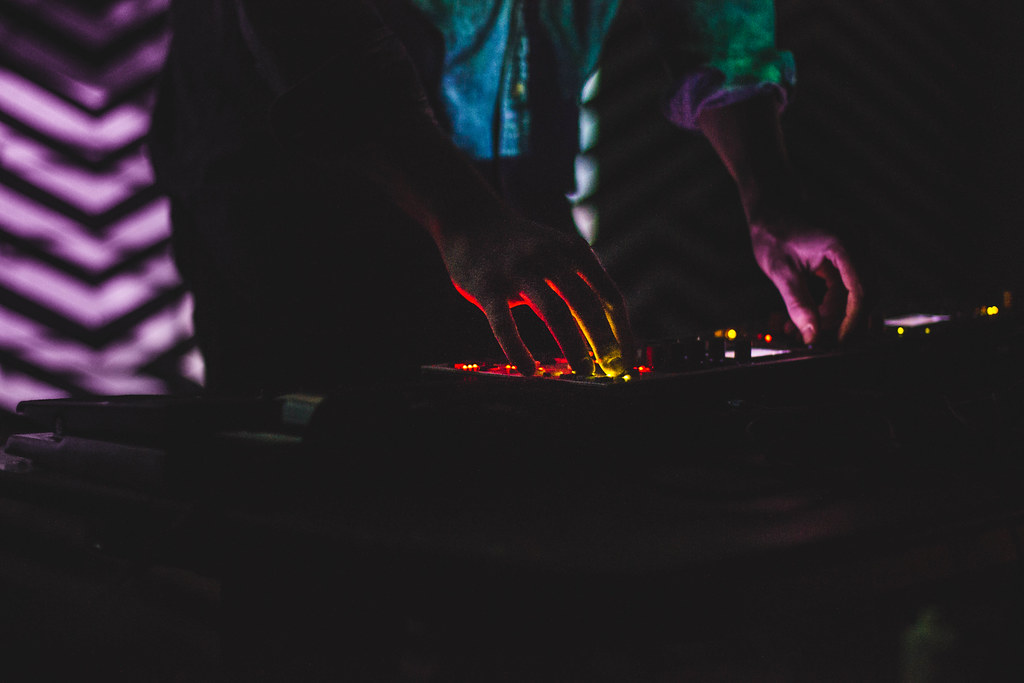