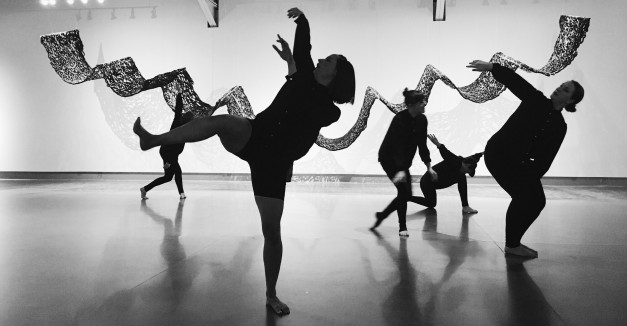 7:10 p.m. – Find a seat find a seat. Good, there’s one open in the front row. Pull program out of my bag and a rotten banana falls out. Hide it and pretend it never happened. Barely notice man dressed as a modern day crocodile hunter sweeping the floor.

7:15 p.m. – Show doesn’t start until 7:30 p.m., so I suppose I can be social. Walk around and exchange pleasantries, take a sip of water and find myself back at my seat. One more cookie. Okay two more cookies. Crocodile man is still walking the stage, meticulously sweeping his super old wire haired push broom and donning a sly grin – is this part of the show?

7:35 p.m. – Some 200 crowd members find their seats. Some of the dancers had to pull out more chairs. It was a packed house y’all. Man still sweeping.

7:40 p.m. – I’m going to be cheesy for a second, but I can’t help but notice how appropriate this water exhibit is for tonight’s performance. From what I know about Making Space, the seemingly fluid and original movements and music are a surely welcome expression in the space. I also was excited for these performances as my older sister was in dance growing up, and I used to love going to her recitals and dressing up in her dance costumes (my parents should have had it figured out then). I was also in tumbling and gymnastics until about 6th grade.

7:41 p.m. – Kat Fackler welcomed the guests. Kat is the best. If you don’t know Kat, know Kat. Michael Hollins, Program Manager at KANEKO, explained the Water Exhibit is open until April 23 and is free to the public. Also, the series Eko Nova has another installment coming up at KANEKO on Feb 29 which will feature Fiddle and Blues.

The dance started out with a series of plank movements and resistance. The dancers stood strong alone, and used each other to create unique and fluid movements to the violinists. It seemed as though they were trying to break free of something or reach something unattainable, all while making the best of it. All six dancers found unity towards the end of the routine. The movements were both technical yet modern and original. At the end of the first performance they all fell over, maybe they were all literally a 6-piece box of chocolates and got eaten on Valentine’s Day. Thank you.

One dancer moved from one side of the room to the other, solo dancing for about two minutes. She then walked back to “release” another dancer to take center stage. All while the two dancers in the back were either still, or had slow, methodical paired movements. It seemed as though they were each releasing expressions into the universe to see how people respond to them, trying to express something deep within. Each time the dancers interchanged their solo center stage performance, they seemed to be releasing something genuine and true. These motions for me represented the stages one goes through in life, figuring out who one is. While one person takes the lead, your past will always be a part of you, slowly playing a role of how you act and express yourself with age. This dance represented the unspoken emotions we all feel from within. At the end, the dancer in the middle held her pointer finger over her mouth to symbolize “quiet.” Right at the end of this performance I started thinking about cookies again.

Three dancers stood while holding one dancer who faced away from the crowd. It seemed as though the standing dancers were friends tending to their friend who was mourning (whom they were holding), and offering up their authentic selves to provide empathy and space. The mourning friend dancer started to move, and it sparked a new kind of intense energy throughout all of them. It went from somber to scared and frantic — all feelings we feel when we are go through hard times. These four dancers lifted each other, watched out for each other and bonded through the entire performance as it got increasingly more dramatic. The dance ended with two dancers on one side, and two on the other? What happened? Maybe two of them were voting for Trump. Whatevs.

Directed and Edited by Nik Fackler

Started out pitch dark. I was scared and hungry. A video started playing to the right of  the guests. The video was very haunting. Imagine Wes Anderson meets Quentin Tarantino. The graphics were trippy yet provided some moments of clarity. The camera seemed to crawl around the space following an emotion that was both tormented and peaceful. The music felt and sounded like a seance, a ritualistic experience if you will. The dancers would enter reality and then spaz out in the middle of a move or the video would seem to roll through some sort of drug high experience. Nik Fackler shot and directed this video. I was dazzled by the cinematography as much as the dance performance on the screen.

Music: Interlude 1 by Alt-j and Rubric by Philip Glass and Memory Tapes

Wearing all black, the dancers stood in a cluster. As the Alt-J song started, one dancer broke off. At one point they turned into a transformer and it was amazing. They used the entire space for this performance. Running from one side to another as the music changed between songs. The energy in this performance seemed to be very hip, angsty and soulful. This was my favorite dance so far, that’s probably why I didn’t write much about it (too busy watching it and being caught up in the moment). Loved the energy.

Music: An Ending a Beginning by Dustin O’Halloran

This was the only solo performance of the night, and it was very emotional and captivating. The moves had such precision, power and grace. Her control throughout the entire number was intoxicating. She didn’t seem sad, happy, angry or anything in between, yet the dance was still very moving. She just seemed to be floating across the floor in a majestic, peaceful way.

The final performance of the evening. Dancers started out on either side of of the stage. Two dancers stated while the rest waited on the sides. Two more dancers, after about a minute, started to creep towards the floor. As they got closer, the two original dancers scampered off the floor quickly to join the rest of the dancers on stage left, standing in uniform. Four dancers moved in to one side of the stage, as two other dancers occupied the other side. Five dancers laid on the floor and used their bodies to roll and propel a dancer across the tops of their bodies bodies, then quickly created a human bridge having the same dancer waking on top of their backs. This performance used the entire stage and then some. The live music was all-accompanying and also filled the entire room with quick melodic beats and rhythms. A very exciting performance to round out the night.

8:41 p.m. – All of the dancers in Tbd. Dance Collective, the musicians and Nik Fackler took a bow in one long line. Bravo all. Bravo.

8:45 p.m. – I got to catch up with Kat and Nick to see how it all came together. “The first making space happened because they just wanted to expose people in Omaha to dance and ‘show them some weird stuff.’ There was an overwhelming response to the first one, so plans for the second formed and tbd. came together to curate the performances.” So there you have it folks.

Thank you to Tbd. Dance Collective, the musicians and Kat and Nik Fackler for making space for all of us tonight. And thank you for the cookies that I stuffed in my bag next to my rotten banana.