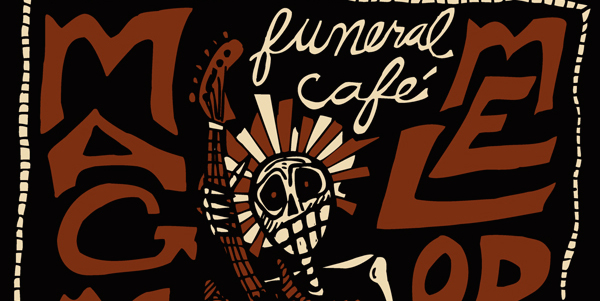 If there’s a tagline I could give for the lyrical themes running through Magma Melodier’s Funeral Café, it’d be digging into the past. To contextualize the present. And maybe help the future.

It’s those excavations into what sound like old heartbreaks, pleasantries and lessons in Jeff Iwanski’s lyrics that find the grinning skeleton on the album cover in such fitting form.

And similarly from the Lincoln band, the Americana rock that spreads out across the patient 11-song record sounds equally like the product of lifelong study. It’s a band of veteran players like Mark Hansen and Chris Steffen, both of whom had a hand in producing and engineering the album, as well as Tery Daly and Vince Ruhl. There’s an absorption happening here of many corners of 20th century rock and country that results in songs that sometimes drip with relaxed folk harmonies and sometimes find themselves erupting into rock operatic interludes you wouldn’t have expected to appear. Perhaps even less expected is how skillfully they sink back into Iwanski’s songwriting, which a little adventurous but mostly notable for its relaxation.

Funeral Café is available digitally via Tremulant Records, but the band officially releases the album this Saturday at Zoo Bar with The Allendales and Mark Thornton Band. To preview the show and spin some songs from the album, I’m joined in-studio by Terry Daly, Mark Hansen, Jeff Iwanski, Chris Steffen and Vince Ruhl.