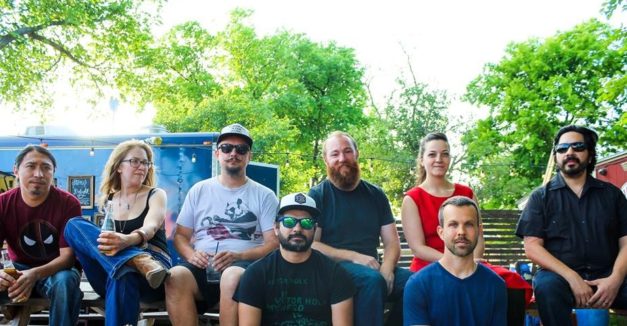 [This feature interview previews Madisons’ Wednesday, June 15 concert at Duffy’s Tavern with Clay and Andrea von Kampen. The 9 p.m. show is $5 at the door. RSVP here.]

By day, Dominic Solis is a social worker, putting in more than 60 hours a week. At night, he comes home to a house with a large chalkboard wall. Robot and tornado doodles break up song titles sprawling across the space, a living and evolving brainstorm for Madisons’ next album. Some nights the Austin garage folk band comes to this room with the chalkboard wall to collaborate.

All eight members of the band have full-time jobs outside of Madisons and many also have kids. Madisons is putting its day jobs — ranging from custom LED light installer to robotics technician — on hold, bringing its storytelling lyric-driven music to Duffy’s Tavern tonight.

The eight-piece, brutally honest band’s music is for people at the bottom, and with lyrics from their most recent album, “No One’s Ever Gonna Know Your Name,” about alcoholism, cocaine addiction and losing lovers, it resonates with the worst of times.

“Life’s a bitch,” Solis says. “We’re all trying to get through it together.”

No One’s Ever Gonna Know Your Name follows Sal, a young Mexican whose youth is torn apart by alcoholism, his joining the army and losing the love of his life. Ultimately, through intense trial and error, he ends up somewhat happy and where he’s supposed to be.

The character was influenced by Solis’s upbringing in the poor environment of Sweetwater, Texas. He found sanctity in school though and fell in love with writing, feeling torn between his world at home and his life at school.

The band’s principal songwriter, Solis finds inspiration for his albums not only from his past but also from authors and stories. He writes albums in the style of elaborate, eloquent and witty novelists like Kurt Vonnegut, Chuck Palahniuk and songwriter Jason Isbell. Early on, Solis’ literary influence created a roadblock on the band’s sophomore LP You Can Take Your Sorry Ass Back To West Texas! His publicist urged him to not only remove the curse word from the album, but significantly shorten it. Solis disagreed.

“You don’t waste a word. We can do whatever we want right now,” he said.

Solis had Madisons’ cult following in mind, built on the back of its energetic, demon-exercising performances. Its fan base spans across the country, even spilling into Canada. In Austin, Solis ran into a Lyft driver from New Jersey that pulled out a burned copy of a CD Madisons handed out at one of its first shows. Solis believes their fanbase loyalty is unwavering because of relatability.

“They dealt with these same things,” Solis said. “I meet all these people who tell me stories and things about their life. The lyrics aren’t word for word, but a lot of it is and a lot of it happened to my friends.”

According to Solis, all of Madisons publicity is through word of mouth and owed largely to the Internet — fitting, for a DIY budget. After its first few shows, Solis started getting Madisons fan emails and, during a promo in Los Angeles, almost everybody that came knew the words to the band’s songs. After that, Solis knew it was on to something. Madisons’ high-energy shows, jampacked with confetti cannons and audience interaction, demanded attention from crowds in Colorado, California, Wisconsin, Florida, Texas and Ontario.

“We need to do something to get that attention,” Solis said. “You have to do you and then do it even better. It’s balls to the wall, whiskey and sweat flying everywhere.”

Brostad, an Omaha native, was surrounded by lively performances growing up. Her grandfather was a natural musician who taught himself by ear. Her Uncle Wayne was invested in the music scene as the bassist in classic rock band Flyin’ High. Brostad kept a poster of her uncle tacked to her wall.

“That’s what I wanted to do,” Brostad said. “I wanted to be in that poster.”

Now she’s on her own, a purple Clash of the Titans-themed tour poster with swarms of winged ‘M’s and a list of dates. The poster characters, like the blue sea monster rising from the depths, are an underlying theme for Madisons. Sal, for example, signifies Solis’ difficult past.

“Writing about these things that can be pretty terrible but I’m still here and I’m still trying,” Solis said. “I’m not going to let that defeat me.”

That’s where the chalkboard wall comes in. Brostad, Solis and the rest of Madisons scribble their ideas on the board, moving forward and further away from hardships. Madisons shows share a similar sense of community.

“[Performances are] a celebration,” Solis said. “It’s tough but everybody is going through these things. That’s the connection.”