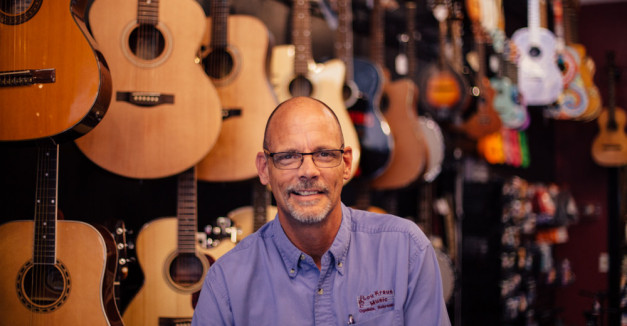 There’s classical band instruments, home and professional audio equipment and a three-times-breaking wave of guitars. One of the shop’s quieter faces is its essentially unadorned exterior, fitting in modestly enough with three downtown blocks of small business storefronts.

That, and the above-the-register glass case of the store’s finest instrumental offerings. This includes, perhaps, the store’s most notable artifact, a small-bodied 1925 Gibson L-3, looking quite secure and a little untouchable.

It’s a quiet summer lunch hour, something owner Bob Josjor says has more to do with the time of year than the popularity of his store.

Against that intangible, undefeatable opponent, in his eight years of ownership, Josjor has competed well. There’s no musical pretension about what it will take for a local music store to survive, much less thrive, in the age of the internet and big box retailers. Diversity, flexibility and personal service comprise that list.

Just that morning, there was the octogenarian looking for a new keyboard to play her senior center gigs.

“Four days ago, we had a 5-year-old we got to equip with his first ukulele,” Josjor says. “An hour ago, we had a DJ who loves to do Mexican weddings, looking for PA gear.”

That same weekend, Josjor performed live sound for musicians at the Flatwater Music Festival in Hastings. In the fall, he’ll travel 300 miles a week around the area, doing pick-ups and drop-offs for school instrument repairs. Josjor estimates 60 percent of the store’s business comes from outside Ogallala and the immediate area.

Tall and bespectacled, Josjor lists the store’s challenges and accomplishments in an easy and well-practiced manner. He’s no stranger to explaining the economic and financial realities of owning a business in Ogallala. Josjor was president of the town’s local chamber for 12 years and spent eight years as part of Ogallala’s Community Redevelopment Authority. Josjor says he appreciates that low barrier to civic change about the town.

“I’m a no-good sax player,” he says. “You don’t necessarily have to be a big-shot banker or lawyer to make big changes.”

Self-deprecation aside, Josjor plays baritone saxophone in Ogallala’s community jazz band. He’s also proficient on guitar and bass, the latter of which he plays in the bluegrass band The Platte Valley Skunk Runners. But, generally, Josjor knows his way around most every instrument in the book. It’s necessary for repairs.

That’s where — among many other pursuits — the expertise and gumption of the store’s original owner, Lou Kraus, shows up. Twenty years before, Josjor spent many an afternoon sitting behind Kraus’ shoulder, learning the ropes of instrument repair.

“It’s not rocket science, but there’s a lot of little tricks to learn,” he says. “It’s just like fixing a ’72 Chevy. Once you learn some basic things, you can fix most anything.”

A former music teacher and a jazz band trumpeter to this day, Kraus was more than a boss to Josjor. At the suggestion of “mentor-mentee,” Josjor says that doesn’t begin to cover the central relationship that’s kept Lou Kraus music a community fixture through the years.

“It’s worse than that,” Josjor laughs. “Lou’s everything from a father to an uncle to a best friend. He’s a great guy. I couldn’t ask for a bigger blessing in my life than to know Lou. I’m probably the son he wished he never had.”

Josjor began working for Kraus in 1984, teaching guitar lessons. Then, he bounced in and out of employment a few times for the next two decades. Upon his retirement in 2006, Kraus sold Josjor the store, but the former’s name and legacy are all over how the business operates and carries itself.

“I always joke I’m too cheap to buy new letterhead,” Josjor explains the non-name-change. “It’s so well-established. To this day, we still have people come in and ask for Lou.”