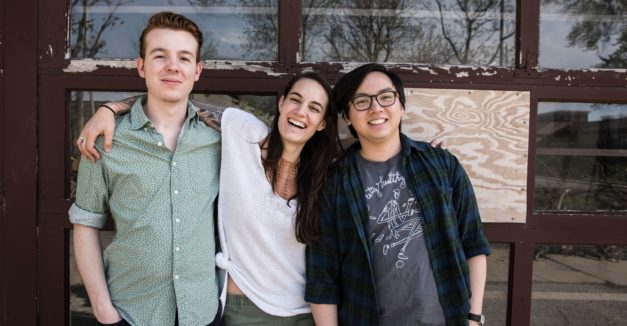 In the winter of 2016, while studying abroad, Omaha songwriter Bach Mai found himself in Berlin for the Endless Nameless Music Festival. Musicians were shut up in the internationally-hailed Michelberger Hotel for a week to create once-in-a-lifetime performances for the one-off festival. Attendees were chosen at random to see one performance or another—Damien Rice a capella in the garden with the Cantus Domus choir; Stargaze, Policía, Kill the Vultures, and Holly Blakey at Funkhause; or Justin Vernon of Bon Iver and Sean Carey on dueling grand pianos.

Inspired, Mai sought to bring the same concept of spontaneous collaboration to Omaha. When he met Conspire co-founder Olivia Malik in his Business in Music class, listening to her monologue about her passion for music festivals, he knew he had met someone to help make his dreams a reality. With a grant from the University of Nebraska at Omaha in hand, the pair conspired to develop a local scale Endless Nameless. They started by renting out the new downtown Omaha DIY venue OutrSpaces for a week as a rehearsal space. Once they finalized their roster of musicians, they shuffled them into groups, and introduced them to one another.

“It’s been really cool to hear people talking and see people vibing,” Malik said “It’s a time for these musicians to come together and explore, to learn about one another and share.”

There are at this moment in Omaha approximately 30-plus musicians who don’t typically work together, creating, in a week’s time with no pre-determined game plan, a four-hour music festival. The five quintets — organized this past Saturday — have no rules. They can retool songs they’ve already written, they can learn covers or they can create completely original content to fill their allotted 30 minute performance block.

Conspire aims to push boundaries and get everyone participating out of their comfort zones by giving them so much freedom. Thus far, groups have encountered some of the same problems many bands do. Malik and Mai have had to sub in for group members forced to miss rehearsal.

“It was really cool because some of them had a melody or an idea and didn’t know what to do with it,” Malik said. “Then we got to watch all the other musicians come in and contribute to what the chords are, how to transition from the A to the B section—it was really awesome.”

Malik also mentioned they had booked a number of dancers who agreed to Conspire, which means there is no groundwork for any choreography. They’ve also recruited artists who don’t know what will appear from thin air, but Saturday night, all of these factors will converge to make magic. And this not knowing, this promise of once-in-a-lifetime, this is the beauty of what Bach Mai and Olivia Malik have set out to do in the shadows of such a festival as Endless Nameless.

CONSPIRE Music and Arts Festival happens this Saturday, May 13 at OutrSpaces. Doors at 7:30 p.m., performances start at 8 p.m. Tickets are $15. RSVP here.