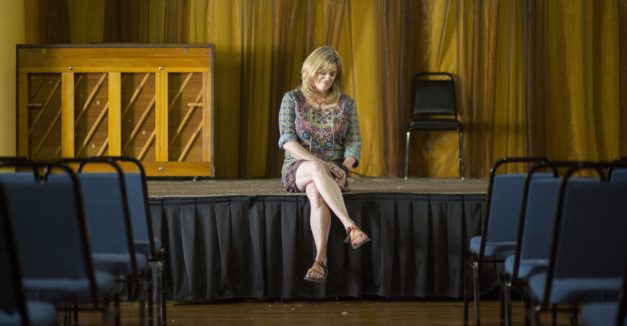 The Listening Room’s 25th anniversary party — held in the main auditorium of The Lark, its foreseeably permanent home, this past June — was both a throwback and a kind of reward for enduring the nonprofit concert series’ nomadic history.

The evening’s performing artists spanned a quarter century of live music tradition: Washington D.C. Bengali folk artist Tom Prasada-Rao, Nashville singer/songwriter Tom Kimmel and jazz vocalist Jackie Allen, among others. The Toms, both veteran Listening Room players, were both performing their 11th concert for founder and executive director Robin Harrell, who talks about them as if they were old friends.

Allen was also an important guest, having played the grand opening of The Lark two-and-a-half-years ago. Harrell identifies that concert as a turning point.

“We decided we were gonna do jazz because we hadn’t presented a lot of jazz in 22 years,” Allen says, referring to her propensity to book blues, Americana and rock.

“I thought, “OK, let’s start with something new.’”

She may as well have been referring to her pet project as a whole. For its first two decades, the Listening Room had moved from a pop-up venue above a downtown Mexican restaurant to a fraternal organization hall to whatever hotel or YWCA would have her. When The Listening Room moved into The Lark, on W 2nd St and S Lincoln Ave, in January 2014, it brought the longest-running concert series in Hastings to its ground floor, opening it up to a new audience in the midst of a downtown-wide effort at community and cultural revitalization. 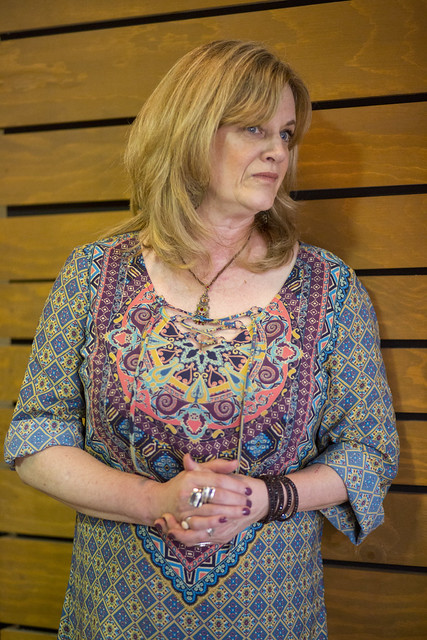 Harrell stands at the wood-columned back of the recently renovated building, facing its rectangular-shaped main hall and stage at its east end, raving about that celebratory concert. She estimates about 150 people came through the two-story-tall multi-purpose space that weekend, some recently introduced to the new venue, some having patronized her show for a quarter century. The place has quickly become a community center since opening its doors, acting as wedding/reception hall, business convention center and, of course, a listening room.

As we chat, she’s discussing plans for a monthly Nebraska music showcase with her intern, Collin Spilinek, a UNL student who reports for the Hastings Tribune. Harrell has always taken care to showcase local talent, booking one local artist to play a 30 minute set before each Listening Room show. Spilinek is helping to sharpen that focus.

“I’ve been going to these concerts for the past five years and I’ve noticed there’s a lot of folk and things like that,” Spilinek says. “I try to get that because I know audiences love stuff like that. But there’s also some stuff like soul or an indie pop band. It’s a good idea to diversify a bit.”

A bluegrass musician and songwriter herself, Harrell has sought her own way to impact Hastings since her move to the Central Nebraska town in 1984. She migrated from Morganton, N.C., at the eastern foot of the Appalachians, with her then-husband, who had been hired to teach at Hastings College. She initially taught guitar lessons, but after going through divorce, she asked herself what value she could add to the community. Hearing her explain in the present, she had quickly become attached.

“It was kind of a commitment when I decided to stay,” Harrell says. “…We needed a place where local people could play their music.”

She started networking with local musicians in the late ’80s, gathering a sense that the cabaret-like setting she imagined could attract enough attention. Her sound engineer, Don Robertson, asked the owner of Dos Hermanos (now Sanchez Plaza) about holding shows in the upstairs room. In makeshift fashion, they set up a small bar in the back, brought in a modest P.A. and hosted a semi-regular local showcase, promoted by way of homemade handbills. 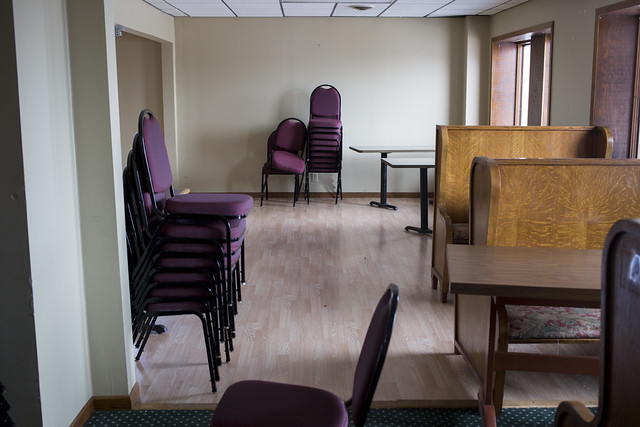 Harrell met Hastings native singer/songwriter Peter Lainson at one of his shows in 1988, a couple of years before her series began. He was in the process of honing his own style out of bossa nova, jazz and singer/songwriter influences, and says Harrell provided the training ground.

“When I met Robin, it all just kinda happened,” Lainson says. “I was at the point where I wanted to take all these musical influences and make them my own style. My association with her and The Listening Room gave me a way to do that in a very practical way.”

Those shows eventually outgrew the tiny second-floor space, due in no small part to Harrell’s plugging into the mid-level national touring circuit. In the mid-’90s, there were, of course, titanic singer/songwriters like James Taylor, Joni Mitchell and Jackson Browne, all who made their living in the spotlight. But then there were players like Kimmel, “The Zen Cowboy” Chuck Pyle and David Wilcox, who toured hard, enjoyed little fame and thrived despite it. Robin though this second tier of professional singer/songwriters might stop at a place in which they might have lodged overnight anyway.

“To me, it felt like she had come upon this discovery that there’s this whole undercurrent of livelihood going on out there with these singer/songwriters that weren’t famous but were really good,” Lainson says.

The Listening Room’s growth necessitated its move to the downtown Hastings branch of The Knights of Pythias in 1993, where Lainson played his first gig for Harrell. The space was larger and the shows became more regular, the likes of Darrell Scott, Kimmel and Prasada-Rao performing monthly shows.

That course persisted until roughly 2011, when the Knights of Pythias closed its doors and The Listening Room became waif-like. With only a $50,000 annual budget, finding a permanent residence would require some help.

At about the same time, the Community Redevelopment Authority sought a suitor for a two-story building in Hastings’ heart. With downtown revival its goal, the organization wanted to insert a business that would not only use both floors — thereby increasing property values and maintaining a years-old historic building — but one that would breathe vitality into a downtown area and, perhaps incidentally, support the arts.

Harrell says she met with CRA director Randy Chick and Hastings Economic Development Director Dave Rippe in 2011, both seemingly interested in getting The Listening Room down to street level. The CRA had been in the process of completing the 800 block of W 2nd St, and a culturally-centered organization made The Listening Room all the more attractive.

After developing a comprehensive business plan and pounding the pavement for building funds, she was able to secure what is now The Lark. An initial $200,000 came via combined gifts from the Hastings Community Foundation and the Kitty M. Perkins Foundation in 2012. The funders — and their investment — gave the project local credibility. Harrell raised an additional $300,000 through the Community Development Block grant, which provides Nebraskans with safe, affordable housing and infrastructure. A flurry of donations from businesses, individuals and small grants totaled $1 million dollars, allowing the finishing of The Lark’s first floor.

“We did our homework,” Harrell says. “We needed a medium-sized event space. The town needed that. And we figured out that it would be supported, and it has [been].” 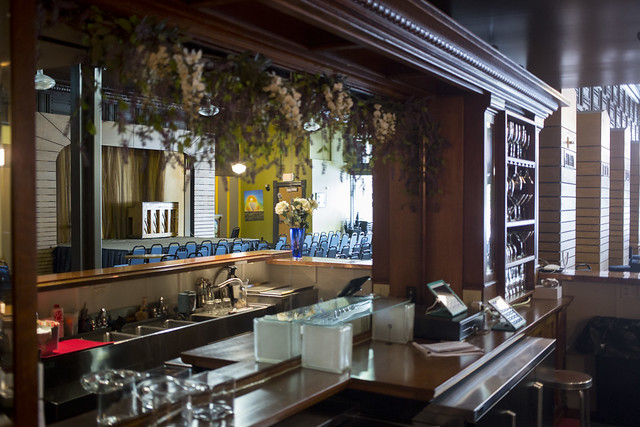 Rippe calls it a no-brainer.

Expounding on the finer details of her current business plan, Harrell’s eyes widen and turn to the second floor. After her capital campaign to renovate the space, The Listening Room’s current operating budget is $150,000. She sees conference rooms, Friday afternoon clubs and private lesson space — the last of which is closest to her heart. Part of her ultimate vision is to offer budding musicians a chance to learn from resident and traveling veterans, passing the creative torch from one generation to the next.

“It inspires people to believe that they can do that kind of creative thing, that they can aspire to be an artist,” Harrell says. “As an arts organization, that’s the ultimate goal, right?”

She also envisions twice as many concerts. Her organization’s new home affords her many possibilities, which has even her in awe.

“It’s allowed me to be in control of my schedule and have music whenever I want to, and that’s huge,” she says. “When Collin and I pick out one date every month for the next year that we wanna bring in Nebraska bands for a separate series, we can pick out dates and we’re done. We don’t have to ask anybody.”

This past June’s anniversary concert marks a huge step toward achieving an overarching vision. Judging by her accomplishments to date, and with her organization finally at home, there’s true potential. Her audience doesn’t have to drive to Kansas City, Chicago or Denver to see quality touring musicians — and hasn’t for the past 25 years.

“We’re bringing it to Hastings,” Harrell says. “I think that is the thing I’m the most proud of.”