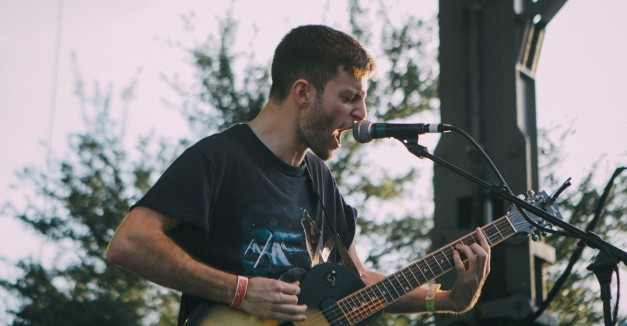 It was Day Three of Fest 14, and admittedly, the HN crew was in need of a pick-me-up. The preceding 48-hours — packed with airplane travel, perspiration and plenty of PBR — had left us thirsting for a jolt.

PUP had long-since been circled on our collective schedule. The Toronto broke-out last year, its self-titled debut dropping on SideOneDummy Records to a cascade of critical applause. Between ample Fest pre-show buzz, raucous sing-a-long numbers and a slight inkling we’d hear new material, we looked to their afternoon slot as the remedy to our exhaustion.

In more than one way, it turned out to be one of the more memorable performances of the weekend. “Lionhart” blared and the crow matched PUP blow for blow as the Florida sun sank behind the Lot 10 stage. We had unknowingly met guitarist Steve Sladowski at nearby Palomino’s the night before, and did a hard double-take when we realized he was furiously riffing away stage right. And milestones were hit, as I went surfs-up on my first crowd:

Needless to say, our batteries got the jump they needed.

Below, view live video of PUP’s “Lionheart,” from HN’s trip to Fest 14.