story and photos by Michael Todd

The story of Roots Music Shop begins some 112 years ago on P Street near a large part of Lincoln, Neb., that didn't exist at the time.

The story begins before the Antelope Valley Project cut about half of the then-10,000-square-foot building down, and led to its restoration, before Ryan Larsen began thinking about owning a music shop — before he was born — and 24 years before the man who supposedly built this structure at 233 N. Antelope Valley Parkway would lose his vice presidential bid in the 1924 election. The very history of Nebraska lives in the building that William Jennings Bryan's brother, Charles — there on the left — raised from the ground.

The building will mark this Saturday down as yet another diary entry worth writing into its walls. Roots Music Shop opens to the public from 10 a.m. to 6 p.m. with music by The Upstairs Blues Band, Blues Messengers, Grassfire and Two Gals and a Guitar from noon to 5 p.m. For Larsen, this is the ideal address at which to cultivate the American heritage of roots music and to supply, maintain and educate the Nebraska music community.

As we talked in his shop's acoustic room on Wednesday, the space's log-cabin aesthetic carried with it the fragrance of a guitar newly assembled. Countering the freshness, Larsen looked the part of shop owner less than three days before a grand opening. He hoped the vintage bass drum he stood behind as I snapped a photo would cover his attire, but some of the hard work he's spent building out his shop still showed in his eyes. 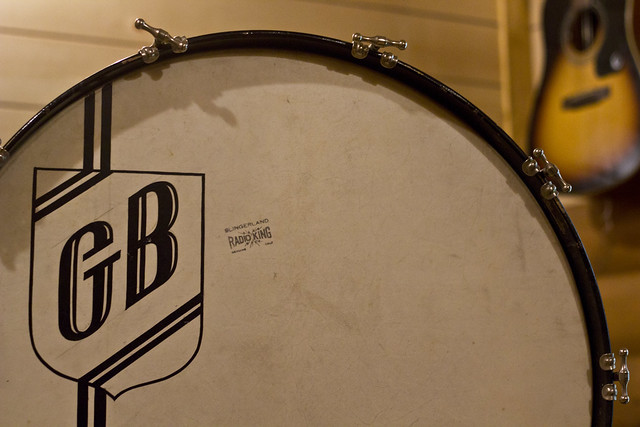 The tiredness is further evidence that Larsen is a passionate member of the creative class. His background in music reaches back 25 years, and his band the Blues Messengers celebrates 10 years in 2013. For Saturday, Larsen has asked a couple friends to sit in for him on drums as the band plays his shop's opening. He says he will have a few other things to do.

Now even closer to his deadline, Larsen says, "It still feels very nerve-wracking and scary, but there's some liberating feelings that come from it. I'm excited, but I'm very nervous."

Larsen knows Roots Music Shop isn't his most lucrative option for a business. He is hoping only to make enough to stay open, and he says money is his last priority. What does matter are his efforts to keep roots music and its culture alive in both the musicians and the instruments. 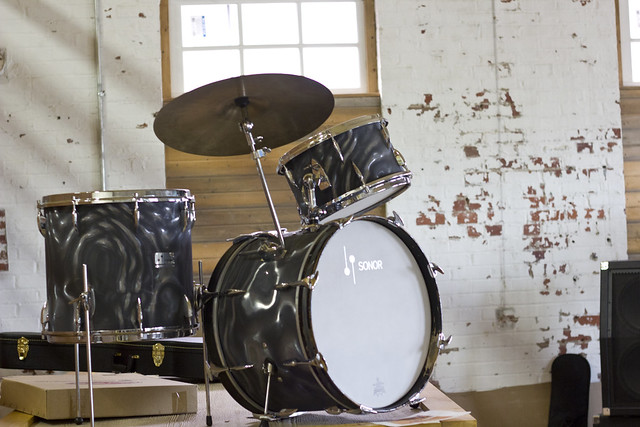 Listen below as Larsen talks about the history and meaning of his shop, which will be open Monday through Friday from 10 a.m. to 8 p.m., Saturdays from 10 a.m. to 6 p.m. and Sunday from noon to 4 p.m. Hear as he effortlessly ties the music and its makers playing over the shop's speakers into his answers about his own background and the American artforms he wants to preserve:

Michael Todd is Hear Nebraska's managing editor. His house was built in 1926. Reach him at michaeltodd@hearnebraska.org.