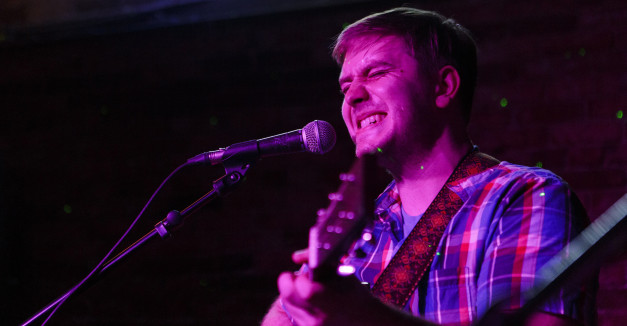 It took one night and maybe an hour to realize this year’s potential for genre mingling at the tenth annual Lincoln Exposed.

Billing diversity is a topic Hear Nebraska has written about extensively in considering the audiences and vibe at the Lincoln music festival (and its fall counterpart, Lincoln Calling). In general, staff writer Jacob Zlomke and I strongly support it. And this year’s Lincoln Exposed lineup is playing matchmaker very, very well.

The most tangible “pro” of not sectioning off venues by genre is people simply see acts they otherwise might not. The fellas of Jack Hotel finished their set, and stayed watching Oketo late into the night at Duffy’s. Prairie Psycho’s Sam Segrist ended up on stage playing kazoo with Orion Walsh at Zoo Bar after his band was finished. A clear benefit, in our mind.

And for the intuitive listener, these sorts of lineups inspire mini-musical awakenings. Prairie Psycho’s Scott Stanfield picking an impressive lead bass helps you hear what Eric Harris was doing with his baritone voice an hour earlier in Xion. Hearing the titanic hook of Oketo’s “Bone Dance” closely following the narrative grappling of Jack Hotel songs is a reminder of the different ways in which music taps (or smacks) the listener on the shoulder and commands, “Listen up!”

Find our coverage of Lincoln Exposed’s Wednesday shows below. We’ll see you out there Thursday, Friday and Saturday. Follow us at @hearnebraska on Instagram for live photos.

The Background: Xion is a relatively new soul/R&B project that’s gathered steam in Lincoln just the last six months. It’s Mary Lawson, VJ Herbert and Eric Harris sitting in a neat row singing, with Herbert playing keys. I’ll try to help with pronunciation, also. Not like the biblical mountain or national park. “Zy-awn.” Say it quickly, with the “y” as a consonant and with a slightly French inflection, if you like. You can also hear them sing it in multiple songs as a little calling card.

The High Point: But the most exciting part about their three-part harmony is that it’s not really three-part harmony, in the sense of a barbershop group singing on thirds and fifths. Instead the voices create a physical and percussive swirl that comprises the vast majority of each song. Harris hovered impressively low at times, synthesizing a convincing instrumental bassline, while Lawson and Herbert harmonized in falsetto or punched together on the same line for emphasis. What’s more, the ensemble style of Xion is brilliant for the equal opportunity trading of lead parts in a genre that’s so often anchored to a single singer’s cult of personality.

The Takeaway: Last night was Xion’s first proper Lincoln bar performance. Herbert asserted the band didn’t actually think it played “bar music,” likening their sound to a cleansing moment of  4 a.m. meditation after a night of partying. With the lights on, the audience listened with patience and reverence, an ideal start to a festival that always promises to end in cacophony by Friday and Saturday. And in terms of Xion’s performance structure, you’d have to look to a folk band (think Jack Hotel) to find a Lincoln band which uses space and silence so often and so precisely. 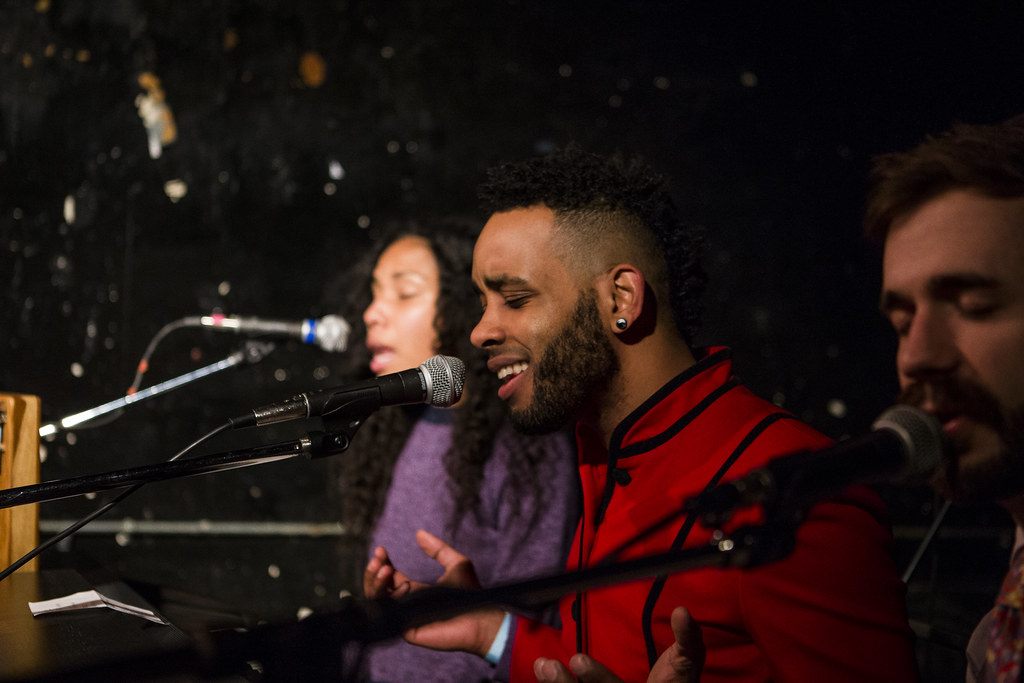 The Background: Last night, Duffy’s opener Izzy Dominguez was on stage for the first time as a unit, though the quartet is made of some familiar faces. Clown make-up-clad frontman Israel Cilio recently spent some time playing with drummer Jimmy Wachtel in Night Hearts. Bassist Jeff Bockoven performs solo as Silver Rabbit and co-founded the Fantastic Cassettes tape label.

The High Point: The sparse and simple structure of each Izzy Dominguez song leaves plenty of room for Cilio’s lilting voice and Justin Flowers’ wandering, spaced-out guitar. At its best, Flowers and Cilio share space with My Morning Jacket’s folkier tunes. At least in last night’s mix, the preference for Cilio’s acoustic guitar illustrates a dedicated Americana influence.

The Takeaway: Izzy Dominguez has the framework to stick around for a while and make some good music while they’re at it. They’re experienced, willing to experiment and the sound has room to grow. There were hints online and during the set that there might be some kind of cryptic background story or concept behind Izzy Dominguez, the make-up and onstage video projection of Nebraska’s capitol. But spend too much time trying to parse it out and you risk keeping yourself at arm’s length from what can be, for Lincoln, a truly unique musical exercise. 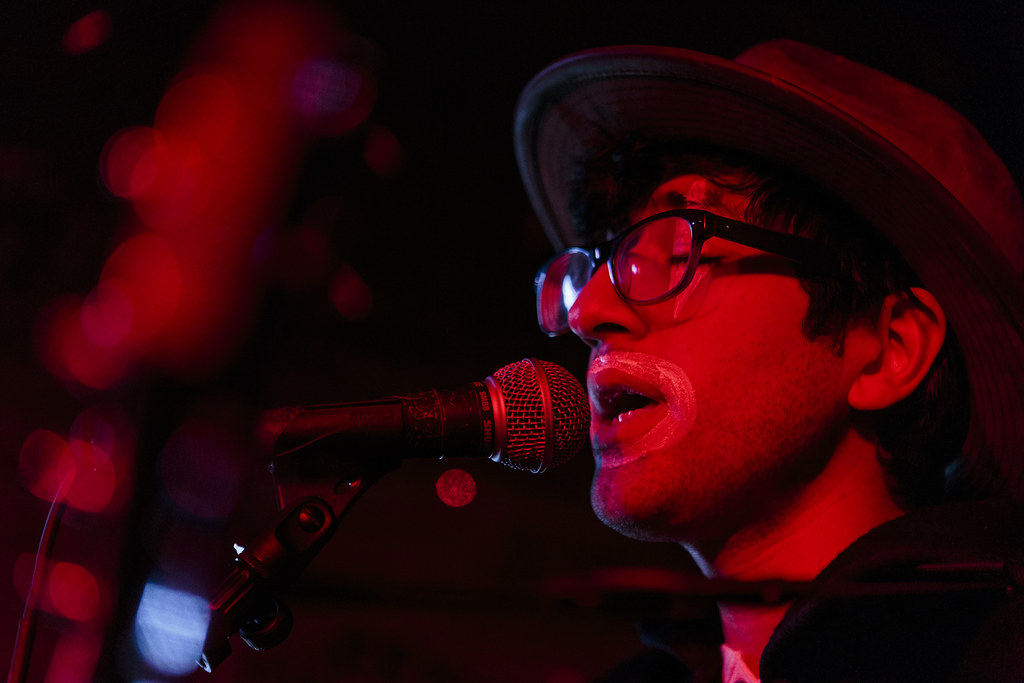 The Background: Prairie Psycho, to my eyes, is one of those seldom-playing bands that Lincoln’s music community happily nurtures — people from other acts (Floating Opera and Dude Won’t Die) with other full-time artistic projects and interests. And then the band pops up at place like Lincoln Exposed, you recognize the players, and they set off into a style you didn’t know they were interested in. In other words, a pleasant surprise.

The High Point: Bassist/singer Scott Stanfield is an English professor at Nebraska Wesleyan and it showed. Ordinarily, the song inspired by a Dickinson poem would’ve been enough evidence, but the song based on a Noam Chomsky sentence — “Colorless green ideas sleep furiously” — closed the case. It’s from Chomsky’s writing on linguistic theory: an example of a sentence that’s grammatically sound, but otherwise meaningless. “Perfect title for a Prairie Psycho song,” Stanfield said, before the band bubbled into the power pop tune. It smartly references Hollywood Golden Age starlets Rita Hayworth and Barbara Stanwyck. Similarly, to the extent that having a tight, ’60s-flavored power pop band in 2015 is just a reference to another time and aesthetic, this was quite a nice reference.

The Takeaway: For as recreationally as Prairie Psycho plays around town, they impressively embody the style of what they’re doing. Stanfield bit off the words and lilted through them with knowing twists to show his ownership. 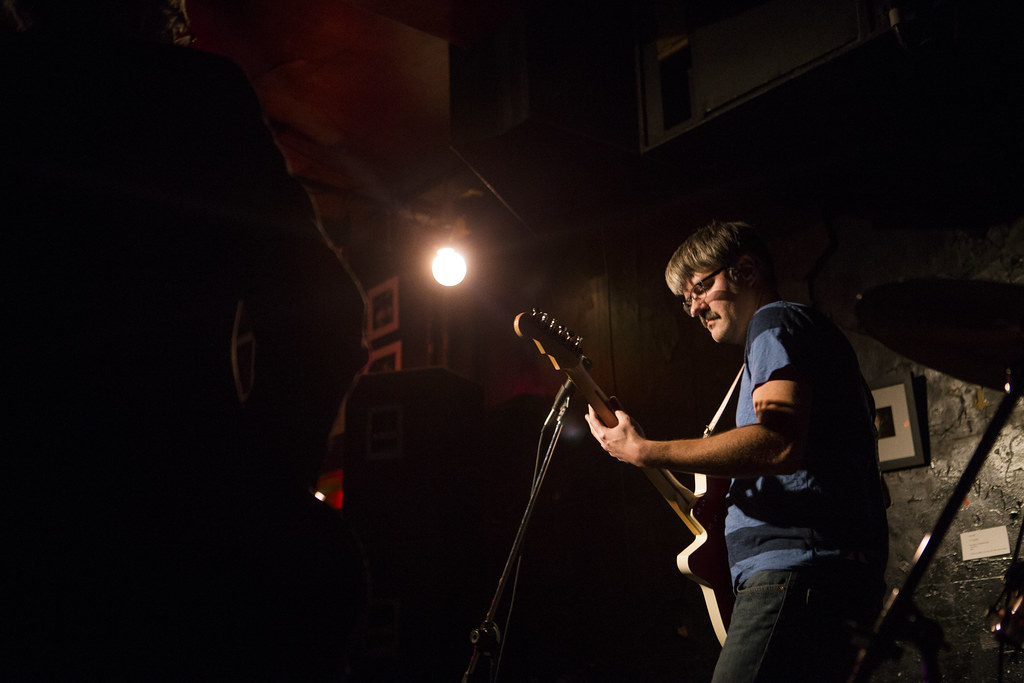 The Background: Jack Hotel released its debut album, Good Sons and Daughters, in May with Lincoln-based roots collective Sower Records. Read about the record here. Its dark, and often literary, take on traditional bluegrass made it one of the most solid Nebraska records of the year.

The High Point: Like a handful of Americana and roots bands around town (Bud Heavy and the High Lifes, The Bottle Tops, etc.), Jack Hotel is a joy to watch for its pure precision. Four, sometimes five, instruments and two, sometimes three, voices all play distinct parts toward the same end. What could easily be an unorganized mess is a beautiful orchestration in Jack Hotel’s hands.

The Takeaway: Jack Hotel songwriter Günter Voelker appears to have been writing songs more to his band’s presence. Newer tracks are less concerned with being narrative-driven short stories and more about cultivating an atmosphere that plays to musical strengths: vocal harmonies are given high priority and every instrument gets its due. 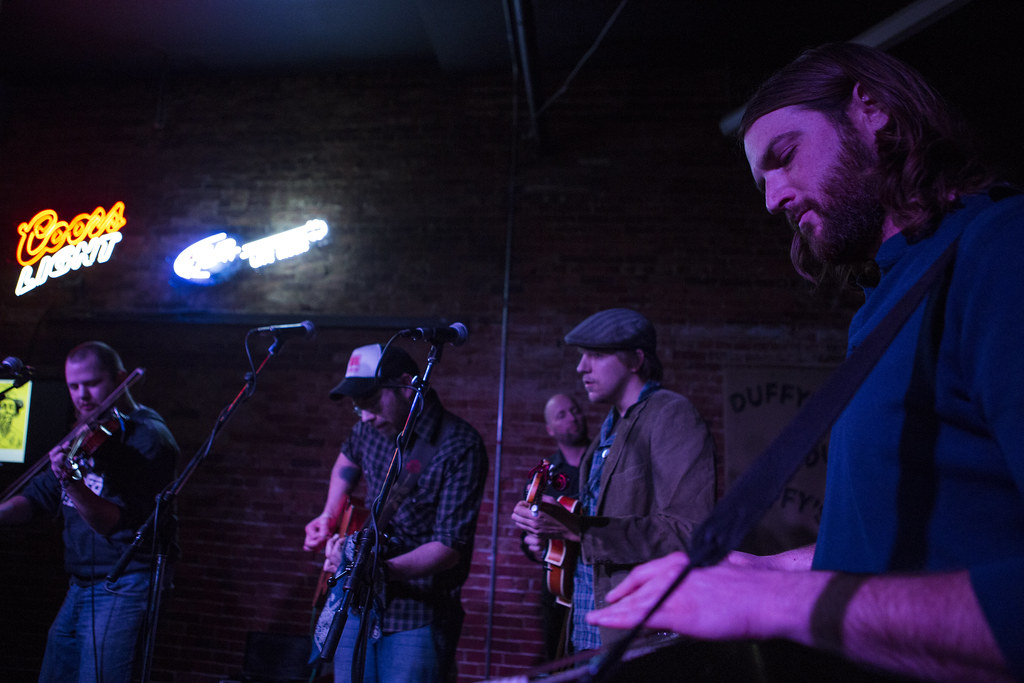 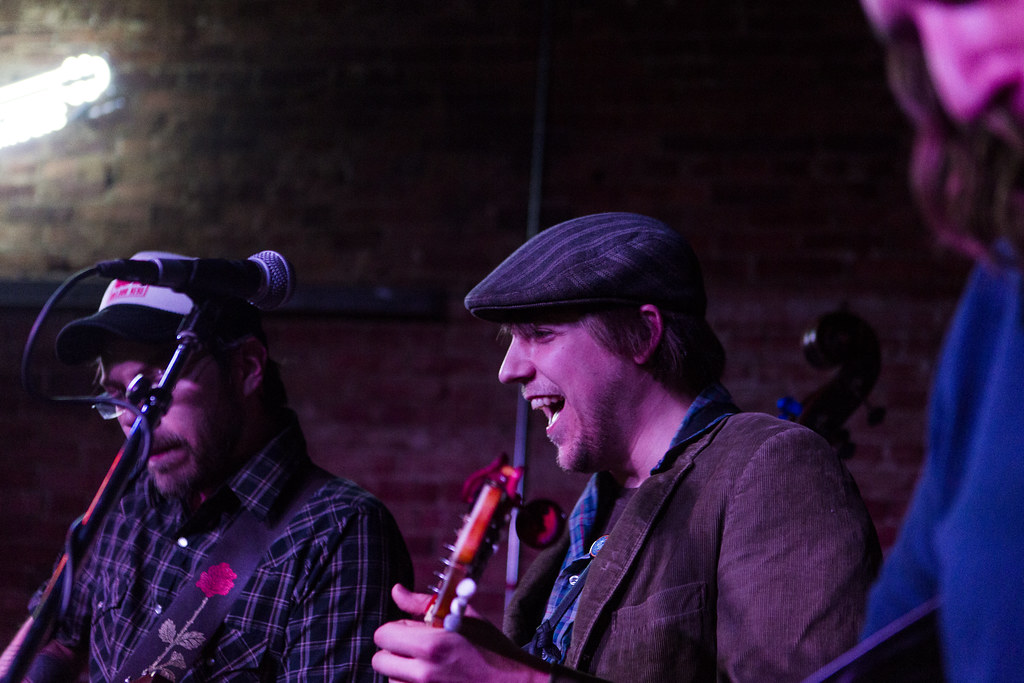 Orion Walsh and the Rambling Hearts at Zoo Bar

The Background: Orion Walsh is back in Lincoln this winter after a recent stint touring Europe. (Even if you didn’t know this to be true, you’d bet on it, given how often the folk singer skips from Lincoln to California to Germany.)  Walsh isn’t a road warrior so much as a road inhabiter. Even in his ostensible hometown, he manages to bring an air of excitement to the Zoo Bar stage he’s played dozens of times. Walsh released The Tale of a Broken Compass last year, his seventh release in seven years. At last night’s show, he was also giving away unmastered copies of a live album he’s working on.

The High Point: People know Walsh plays a hell of kazoo, which might actually say more about confidence and than it says about chops. But for an especially bouncy version of “Wastin’ Time,” he invited Sam Segrist (who’d just finished playing guitar in Prairie Psycho) up on stage for a double kazoo solo. Like squawking birds in harmony with a kickdrum thumping along.

The Takeaway: As always, on a stage with a full band is how we’re meant to see Orion Walsh. If you admire his lyricism, chances are big thoughts about reclamation and devotion suit your taste. And those go down best when they come flying at you. When they get socio-political, Walsh’s songs aren’t dissertations or self-aware debates. He’s the guy who stands up and belts out, “Do we even really need money?” (That’s core point of “Green Paper Black Lines.”) Lincoln’s been enjoying that idealism and spunk for a long time now. 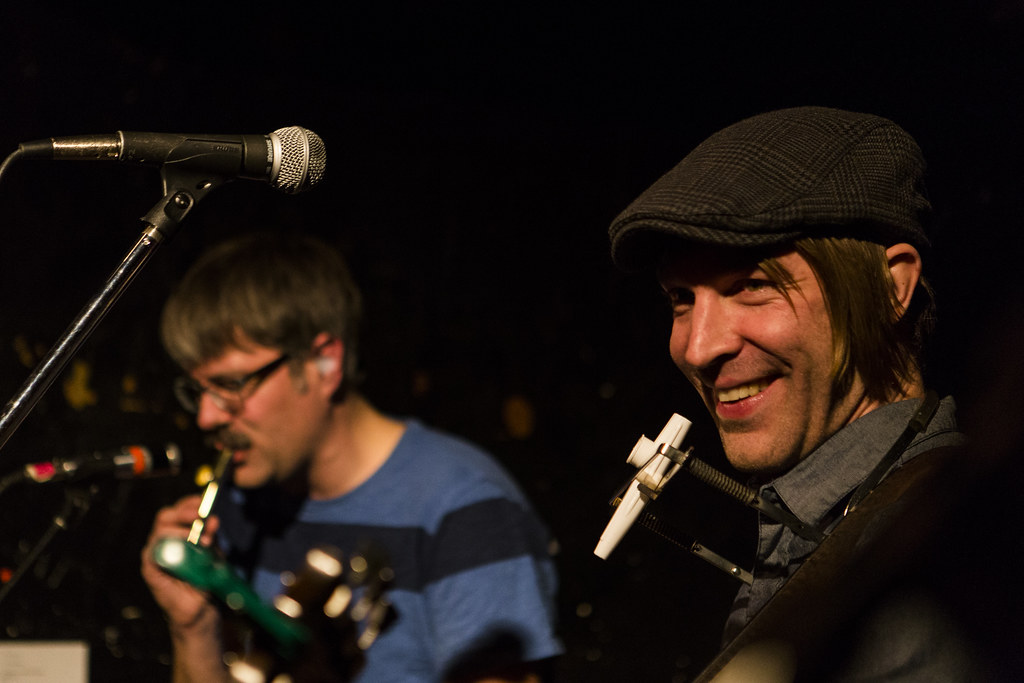 The Background: Blét has been playing around Lincoln for nearly two years now. The pop rock trio released an EP in 2013 and is currently wrapping a full-length.

The High Point: Joe Kozal, Cole Keeton and Spencer McCoy split percussion while doing double-duty on guitar or piano. There’s a full drumset on stage, but it’s in separate pieces. Bringing on a dedicated drummer might seem to be an obvious decision. But the three know each other so well and have been working together so intensely that it’s hard to imagine ingratiating a fourth person without taking away from how tightly-woven the group’s performance and writing are.

The Takeaway: One more band in a handful that have new material to play around with this week. Blét seems to be in greater control of each song’s direction than they have been in the past. The band has always shined in the tension between a delicate melody and the feeling it might erupt at any moment. Now, that tension feels less like a clever trick and more like meticulous and intentional songwriting. 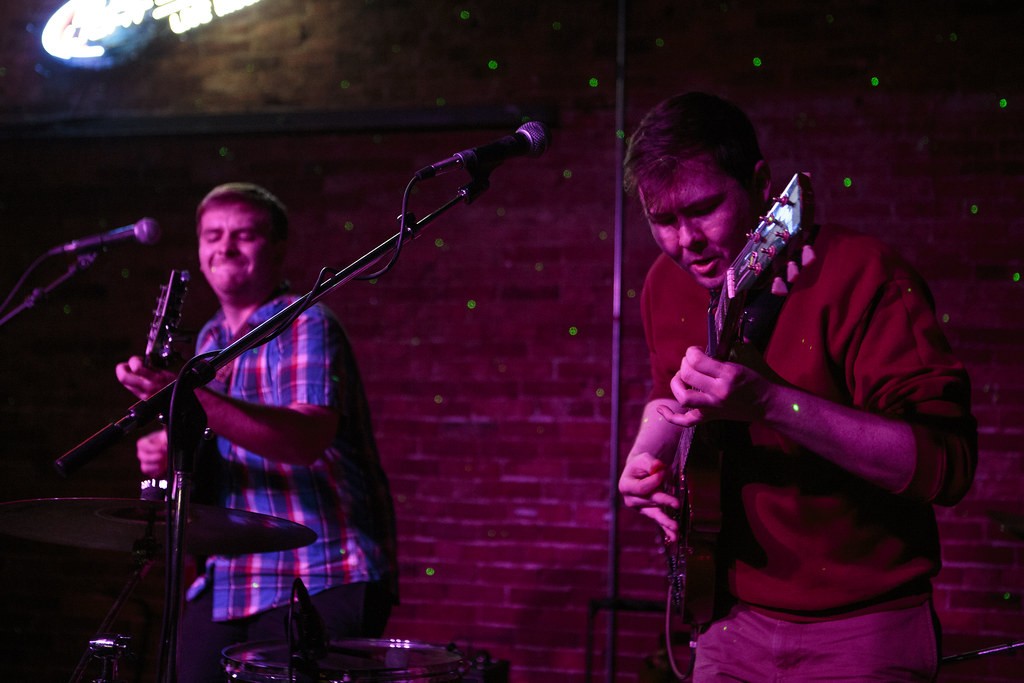 The Background: If Lincoln’s music scene had the equivalent of Forbes magazine, Oketo would top the “Top 25 Under 25” ranking. In November, the band released an EP to a crowded Vega on a stacked lineup, but that was no surprise after they spent most of 2014 packing local venues. They’re about to head out on a spring tour and last night was Oketo’s first show without saxophonist Kyle Brunner, who announced his amicable departure from the band yesterday.

The Highpoint: Frontman Steven DeLair might have it in him to be one of the most engaging frontmen in the state. He’s in control of his own presence, and certainly his own voice, swinging dramatically from sweet falsetto to throat-scratching screams. DeLair often loses himself in his own songs. And it’s earnest, not trite, when he says, “We’re here because of music and that’s beautiful.”

The Takeaway: There’s no denying the band’s collective youth. Songs spend more time indulging than they do restraining, they aren’t yet comfortable enough on stage to treat the space between songs as part of the performance. Still, they’re one of the most exciting bands in Lincoln. It sounds like pop music, but there’s no familiar structure. Songs are formed more around phrases and small movements and it’s a joy to see what turns any track might take. 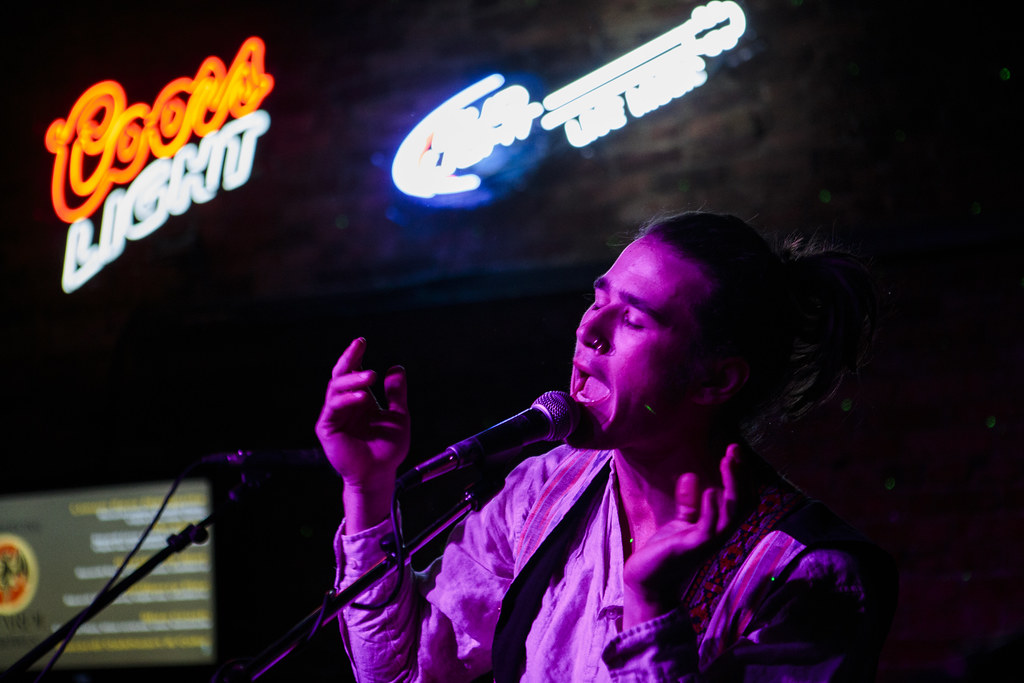 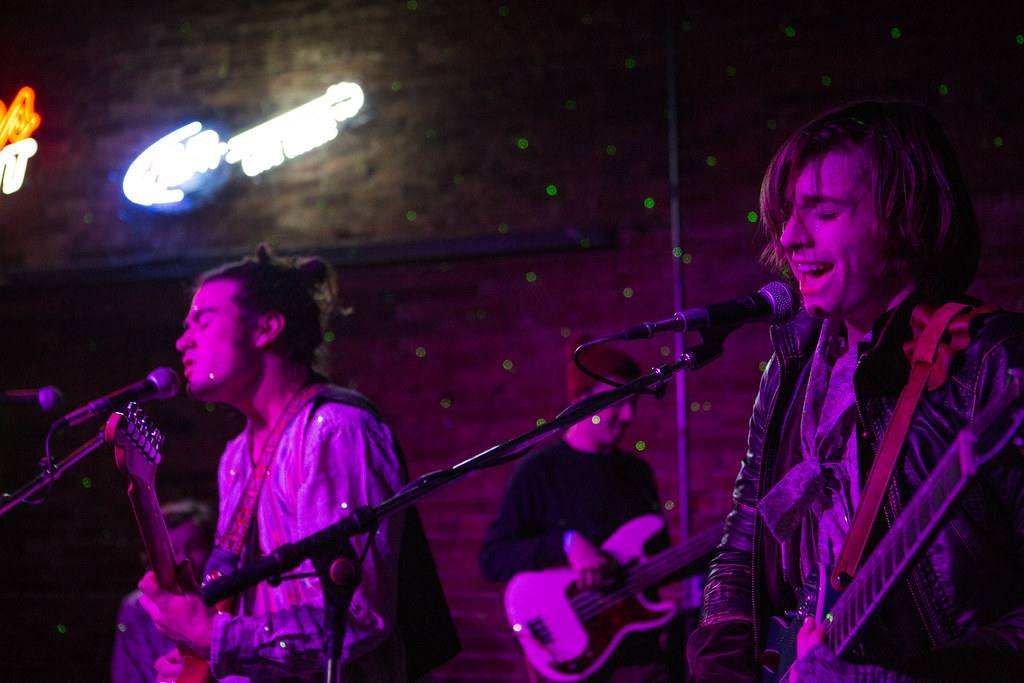