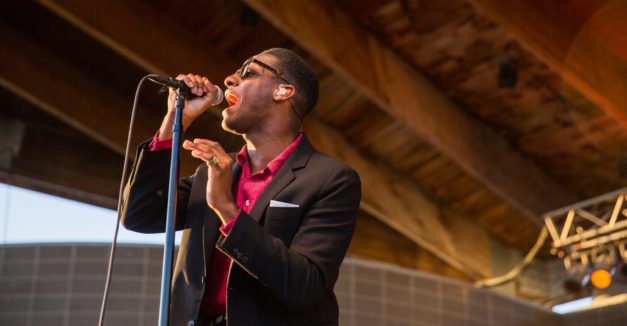 Leon Bridges’ knees were almost perpetually bent. In-tempo with his retro-inspired soul music, he swayed closer to the ground, snapping to keep pace with up tempos and slowly spinning from one microphone to the other. His oxfords, black and white, glided across the Sumtur Amphitheater stage.

His movement was effortless, to a point that in an environment of naive humid-free June weather and sunset in swaths of gold and ruby, Bridges’ dancing humbly commanded the attention.

The 26-year-old R&B and soul musician asked the crowd a favor at 9:30 p.m. near the end of his Wednesday night set. Bridges wanted them to echo lyrics back to him, collective “hey”s and “little girl”s from members of the audience gathered at the base of the stage. “I aint gonna bite,” Bridges promised. Despite security asking the crowd near the stage to leave, some deliberately danced in front of authority, spinning underneath each others arms. Most simply lingered, taking advantage of the lack of distance between themselves and Bridges. 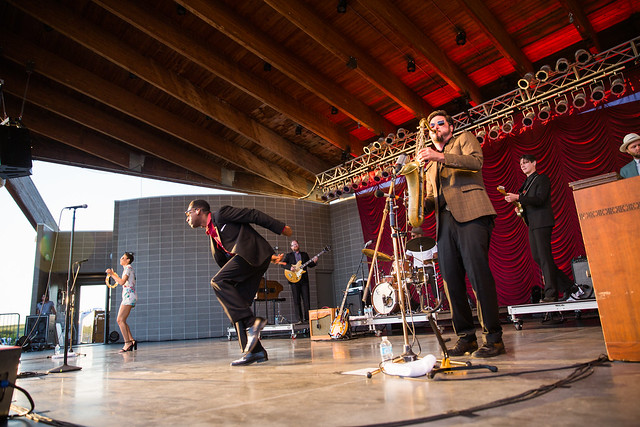 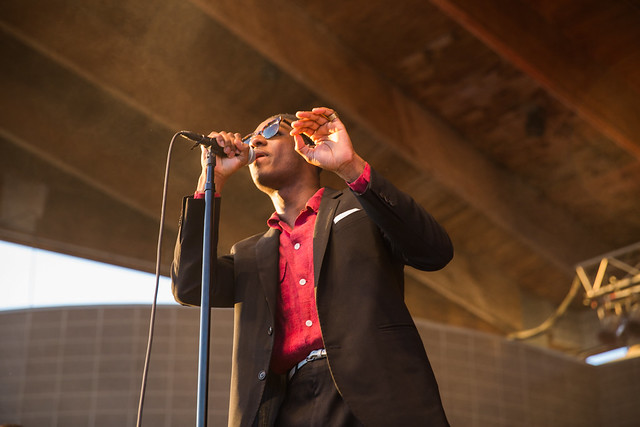 The crowd hadn’t even caught sight of Leon when the opener, Brooklyn-based R&B singer Daniel “Solo Woods,” took command of the sparse stage. It was only Woods and his drummer — the former floating vocals reminiscent of Frank Ocean’s falsetto and D’Angelo’s sex-appeal. An aztec sweater slung over his shoulders and he subtly swayed to mimic the patter of his drummer’s African beat. His two gold chains caught the light when he grooved just enough, a reflection of the sun nestling above the venue. Members of the audience sipped beers and danced in sweet grass that smelled like summer.

Woods asked the crowd if it liked Bob Marley mid-set, switching his effortless, living-room vibe to a modern interpretation of the reggae legend’s music. “How many rivers do we have to cross?” He belted, sending his voice above the almost twangy guitar, ebbing and flowing between strums. Then Woods asked about Outkast. The hip-hop duo’s fans cheered and Woods rocked onto his toes, covering Outkast’s “Pink and Blue,” mimicking the wah ooh wah oh wah of the funky electric guitar. 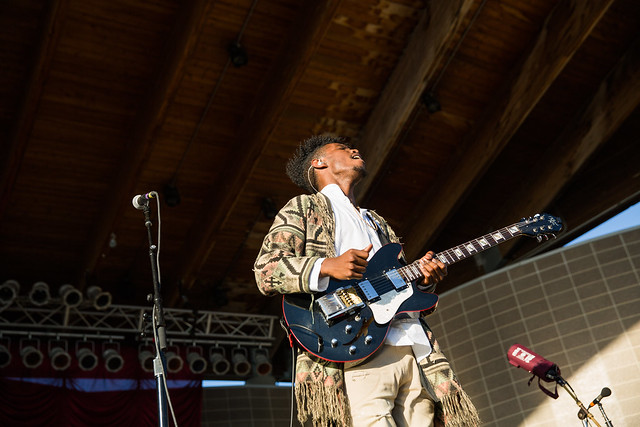 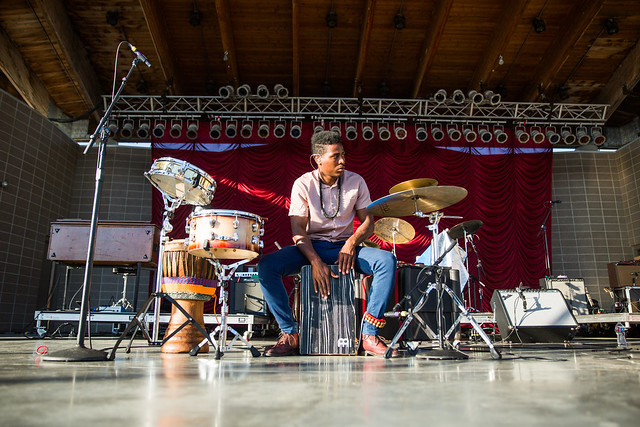 On the contrary, Bridges’ band followed his lead, seemingly inspired by his voice. The soul artist grooved on stage as the amphitheater started to smell like homemade concoctions of bug spray. Sometimes his arms were folded, others his arms were swaying and snapping close to his ribs. His waist and knees were almost always bent. He’s an old soul with a rich voice that kept pace with speeding keys during a new single, “Smooth Sailin’.”

The saxophone belted out a rich, buttery note and the lights faded from a fiery red to heartbroken blue. 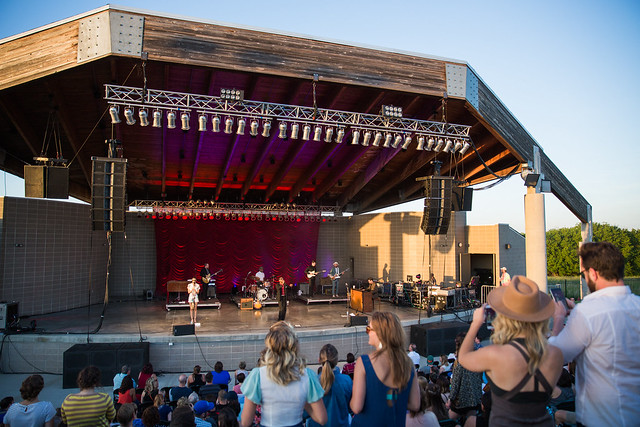 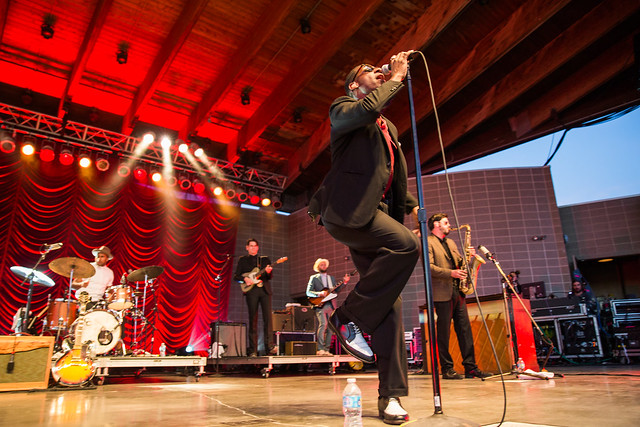 Leon Bridges is known for his classic style as much as his gospel sound, inspired as much by Al Green and Outkast. On Wednesday, he wore a black suit and blood red shirt, the same shade as the draped velvet backdrop that caught pooled light. His small pinky ring danced across the neck of his Godin guitar.

Bridges’ first and most popular single, “Coming Home,” caught the attention of White Denim in 2012. Ex-guitarist Austin Jenkins and ex-drummer Josh Block recorded with the shy musician, a boy grown up on love and Ginuwine and dance lessons. By 2015, Bridges debut album, Coming Home, soared to number 8 on Billboard charts and had a cult-like following from previously released Soundcloud singles.

At Sumtur, “Coming Home” was the fan favorite, eliciting cheers from members of the crowd that knew the words to a song that started it all.

Bridges stopped dancing only to hold the microphone earnestly, like he had the key to true love and wanted to share the secret. “Don’t worry about me baby,” he sang in a raspy climb to his more comfortable, flawless falsetto. Bridges transitioned between notes thoughtfully, scratching his way to the top and sailing down to a comfortable landing. His songs are about nostalgia for times before heartbreak, his mother (“Lisa Sawyer”), closeness to God and “brown skinned girls,” which Bridges said he always dreamed about. Bridges voice was like the June day he played, golden and warm with the promise of more to come. 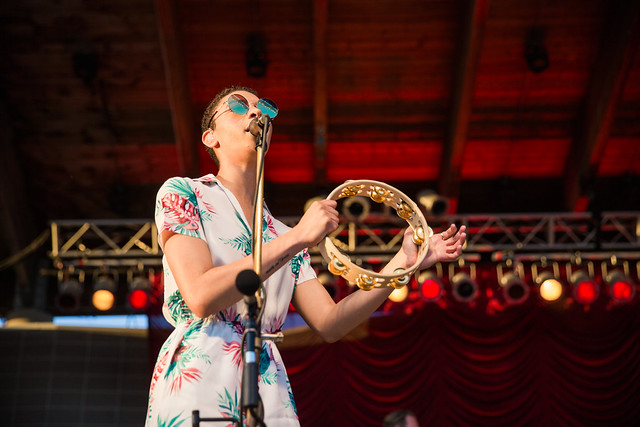 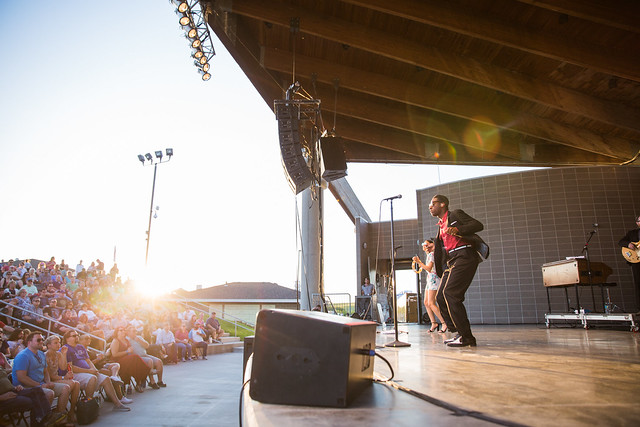 Bridges hummed to ease into “River” around 10 p.m. The crowd hushed, a few already making their way to the parking lot to beat the traffic. But here Leon was, with a band he had just introduced, washed in a deep, rich violet light. “Been traveling these wide roads for so long / My heart’s been far from you / Ten-thousand miles gone.”

The band was down to Bridges’ back up singer Brittni Jessie, her tambourine and his guitar. Jessie’s vocals danced around Bridges’, equally as longing for love and equally as flawless. Her voice hovered over his in the last moments of “River,” until their voices faded with the lights.