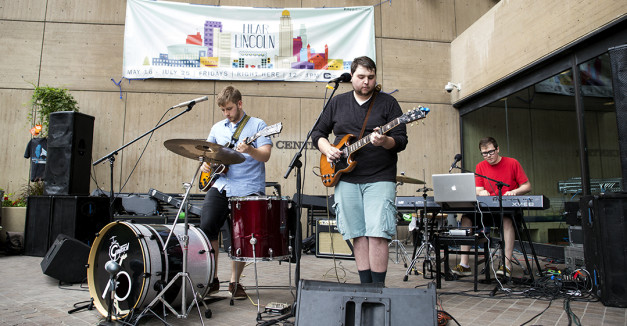 The members of blét play every instrument onstage interchangeably.

At Hear Lincoln last Friday, Cole Keeton, Joe Kozal and Spencer McCoy exchanged guitars for keys and keys for drums, rotating between every instrument fluidly, their harmonies managing to fill a space without walls. Their music contained hushed moments, but crescendoed with powerful instrumental solos, creating a balance of soft and hard sounds.

Under an overcast sky, a scattered crowd encircled the Lincoln-based band. Easing into their set, blét’s performance grew with every pound from the solo drum centered on the brick stage. With each magnetic song, the crowd inched together and more people congregated.

blét performed songs primarily off their current EP, Uncles, released last summer, including “Last Drive Home” and “Waterloo Pier,” but the three bandmates also introduced some new songs to the crowd. This Wednesday, blét plays The Bourbon alongside A Ferocious Jungle Cat and Bogusman, as a part of a Maha Showcase Hear Nebraska is co-hosting.

Jack Hotel caps off the Hear Lincoln series this Friday at noon on 13th and O streets. Until then, enjoy blét’s performance of “Last Drive Home” in the video below.