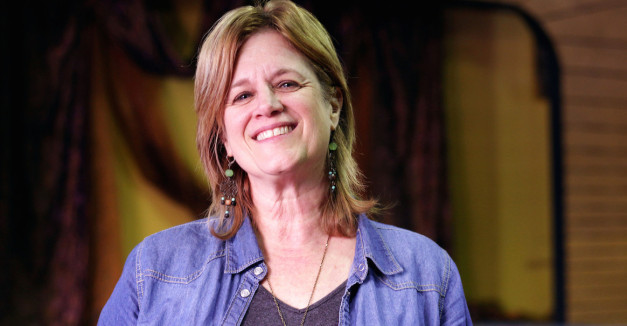 The vintage store fronts and awnings look as if they were extracted from an early 20th-century landscape, placed down neatly one by one along the sidewalk.

But keep walking toward the end of the street, and something stands out. Situated between an insurance building and a deli is a more modern, green building — sticking out like an oak tree in the middle of a desert.

Walk through the front door of The Lark, and it could be another decade. With a wide-open 4,000-square-foot room and 20-foot ceilings, the focal point of the venue’s performance space is an old ‘50s-style antique mercantile bar, made of mahogany and oak and restored from an abandoned store across the street. The walls and ceilings of the building hearken back to an earlier era with their partially exposed beams and bricks.

Keep looking around, and you’ll see rich greens, blues and golds plastered around the room. This is a building that asks to be noticed. It’s a place that wants to be the musical centerpiece of a city.

“The Lark gives us a chance to take our mission of nurturing art to a whole new level,” says Robin Harrell, director of The Lark and a nonprofit concert series called The Listening Room, which aims to give exposure to local and national singer-songwriters.

For three years, The Lark’s space was an abandoned retail store itself until a year ago when Harrell was searching for a new venue to call home.

When The Listening Room started in 1991, a Knights of Pythias hall in Hastings hosted Harrell’s concert series. Not happy with the old venue’s difficult-to-access, second-floor performance area and unappealing physical features, she decided it was time to find a new place to set her roots. She went to the city of Hastings, which helped her find the space that would become The Lark.

At first, she says, the building was a disaster. The once-retail space had been neglected for years and was in dire need of some renovation.

“It was in sad shape,” Harrell remembers. “But it had a double store front, balconies and a high ceiling, and it had potential.”

Through community fundraising, local donations and federal grants, Harrell raised $1 million and was able to purchase the space and begin renovation.

The Lark’s ultimate fundraising goal is $1.2 million. She says the venue still needs to raise around $200,000 to complete the build. While a large chunk of the costs will go to cover construction, day-to-day operations and equipment will also be covered.

Renovations for the performance room were finished in December 2013. The second floor and mezzanine of the venue is slated to be completed in 2015. But this is not just a room that Harrell wants to look great. She wants the sound to be spectacular. She says she is especially proud of the acoustics that the venue boasts. The acoustic paneling installed at The Lark makes for not only a good-looking room, but also a great sounding show.

“The acoustic panels on all of the walls are sculptural and beautiful,” she says. “We get really great sounds out of the room.”

The Lark’s opening night was January 10 with a performance by jazz singer-songwriter Jackie Allen. The show sold out, and Harrell says the reception the venue received was better than she could have imagined.

“They love it,” she says. “They love everything about it. I love that they are commenting about everything. People are very happy about the acoustics. That makes me happy.”

Now that Harrell has a place to host her concert series full-time, she wants to make The Lark a hub for musicians and artists from Hastings. The venue plans to host 16 concerts a year — on par with previous years of The Listening Room — and will also host an open jam night on one Sunday a month for any and all musicians around the area to come and meet and play music.

“It is the old jam circle idea,” she says. “You can kind of lay back if you’re not feeling comfortable or you can join in.”

Harrell wants the venue to be a place for musicians young and old, from beginner to advanced, to share their songs and their voice.

“It feels so good to give them that carrot that is hanging out there saying, ‘Hey, if you get a nice set of original songs together, you have a place to play,’” she says. “That is an incredible incentive. Just that in itself motivates people to write new songs and bring them to the jam sessions to show people.”

The Lark doesn’t just set its sights on booking local musicians, either. Harrell says she actively reaches out to national touring bands, usually of the folk, jazz and country genre. Bands such as The Barn Birds and Cary Cooper are just a few that Harrell has brought to Hastings — and she hopes to bring even more in the future.

“Sometimes I reach out to bands I hear and ask them, ‘Have you ever thought of coming to Hastings, Nebraska?’” she says as she laughs. “They love coming to Hastings because they feel like people here are so into the music, and they are so genuine. And once they play here, they always want to come back.”

With The Lark’s reputation building among national and local musicians, Harrell is pleased with the direction her new venue is headed and hopes to expand their niche. The venue also plans to host one-act musicals and dance recitals, to name a few.

Harrell is most excited for a Feb. 15 concert of local musicians she refers to as a “super group” of artists because of how well they meshed and played together in The Lark’s open jam. It will be their first concert as a musical ensemble, and it is an experience, she says, that the venue is proud to provide for the community of Hastings.

“They get to see the guy who bakes their bread at the bakery play bass, and an architectural designer who helped people build their homes is up there with his wife playing music,” she says. “It’s a real treat.”

Upcoming shows at The Lark:

Sean Holohan is Hear Nebraska’s editorial intern. He loves to jam it out with other musicians. Reach him at seanh@hearnebraska.org.