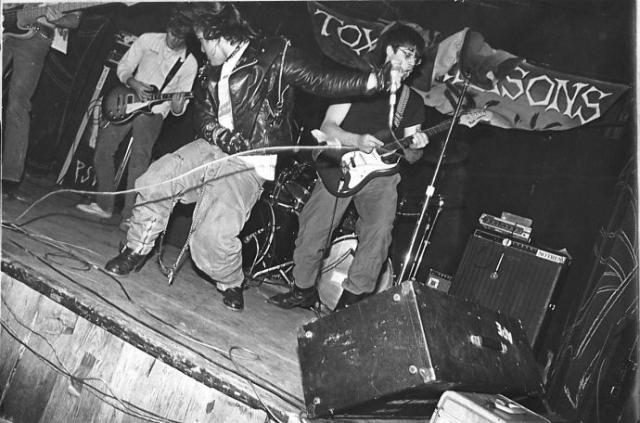 I'd like to issue a challenge to readers. In the history of Nebraska punk and hardcore, please find a weirder band than Power of the Spoken Word. Please find another band that predated crossover with a weird blend of doom metal and hardcore punk, wiith liberal doses of "godless pagan." It would be mighty hard to top a weird slab of bizarro punk straight out of the Star City.

In the middle of the country, music tends to take on mutt influences. This weekend, I had the fortune of seeing Gerardo Meza (The Mezcal Brothers) perform with Jay Kutchma and Ken Morton (The Allendales) in an intimate Hear Nebraska concert. Meza reflected that in high school, he and his friends were punk — they just didn't know necessarily what punk was, so they took the pompadour and owned it with some misplaced safety pins. But in the subtext, there was the underlying need to establish rebellion and the spirit … and maybe the music would hit later.

But in the meantime, we have a series of cities that are far from cultural meccas. Des Moines has never been a rock city. Omaha? There wasn't really much until the last decade or so. Minneapolis? It was a triple threat of Prince, Husker Du and The Replacements that put it musically on the map. In the latter two, you hear the spirit of punk, if not always the musical style. The Replacements had snottiness down to a T, and Husker Du, the requisite bitterness and anger. But both betrayed influences more predominate to the Midwestern states — classic rock licks, the feelings epressed in ballads … an unpunk (but emotionally resonant) version of alternative music that would go on to foster the sounds of the latter day alternative music boom.

But with Power of the Spoken Word we have one of Lincoln's pre-eminent hardcore bands, who would never in a million years be considered hardline hardcore in the East Coast sense. In other words, Boston kids might well have kicked their ass in the hardcore era, at least if American Hardcore's image holds true. The band's sole record Language of a Dying Breed is an unhardcore (at least for that time) mix of Sabbath riffs and hardcore beats, breaking down in time to  bringforth the sludge. Oh, and before you think "My War"-era Black Flag, the band is fronted by Darby Crash soundalike Jake Ryan. The lyrical content ignored the socio-political and dove straight for the occult.

And the stage show took liberal influence from the shock of the metal underground. In a 2004 interview with Star City Scene, Sideshow drummer Pawl Tisdale related the antics of Ryan, saying, "Jake Ryan … once held up a pig's head at a show at a Unitarian church. Gosh. It would have been stupid today, but back then it was creepy-good."

The mix — dubbed "pagan hardcore" by many — predated the crossover period of metal and hardcore, often attributed to the rise of Anthrax side-project Stormtroopers of Death. The site Good Bad Music, an aggregator of punk and hardcore rarities, said of the PSW album, "Some of the most bizarre and original vocal tracks here; a band like no other and quite possibly (maybe together with SPIKE IN VAIN who had another bizarre LP not so much unlike the aesthetical concept of this one) the inventors of what you might want to call Pagan Hardcore. Even when the band plays fast Hardcore, it’s totally off the wall. "

Though they left only one real record — and a few floating demos — PSW remained a strong regional influence. Of the lineup of Ryan, guitarist Steve Sleich and drummer Phil Judt, only Judt survives. HearNebraska tried to reach him for an interview but was unavailable. In the meantime, if anybody has any PSW memories, we'd love to hear them in the comments.

John Wenz is the listings editor for HearNebraska. He wonders how pagan hardcore didn't become a "thing." He can be reached at johnwenz@hearnebraska.org.