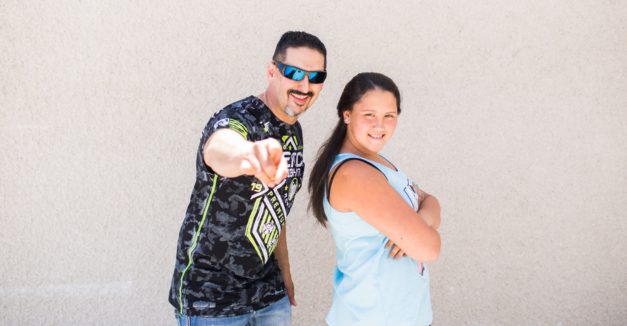 Jason Kimble was 15 years old when he’d rummage through the gadgets of his family-owned Radio Shack in southwest Nebraska. Eager to rid his school dances of outdated music, the young DJ-to-be reveled in stacks of old cassettes and newly-introduced CDs.

Finding the perfect beat was once just a hobby for the Imperial, Neb.,-grown professional DJ. The first time Kimble performed, he curated a 30-track playlist for the Chase County Middle School dance, including songs from Guns N Roses, Def Leppard, MC Hammer and Vanilla Ice.

“Rock was still popular but rap was coming out,” Kimble says of his late ‘90s kickstart.

Gradually, Kimble turned his hobby into a professional party-starting career. Today, his company, Night Sounds Entertainment, provides music for weddings, school dances and events across Nebraska, Kansas and Colorado. Most times, Kimble’s daughter is working alongside him, setting up lights, sound equipment and playing benefits, fundraisers and county fairs.

Jason and 12-year-old Virginia meet me at their hometown’s popular lunch spot, M&M’s, in downtown Imperial, a town of 2,000. Between bites of a Reuben sandwich and sips of raspberry smoothies, the father-daughter duo discuss their unique merge of music tastes and how they overcome challenges of being DJs in rural Nebraska.

Oftentimes, people perpetuate a stigma that DJs aren’t true artists. However, Jason is part of a larger community that sees this idea differently.

“The first thing people think of a DJ is a laptop and a pair of speakers,” Jason says. “But there’s so much more that goes into it.” 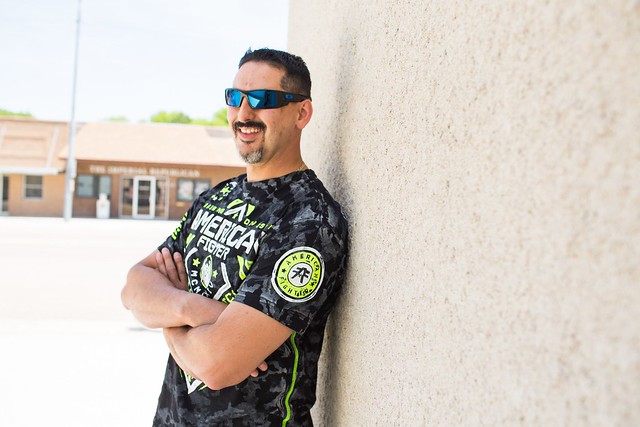 The Kimbles use a customizable 19-track touch screen computer, programmed with pitch controllers and intricate looping features, which they say takes time and practice to know how to use effectively.

Virginia started learning about this equipment over a year ago, with her father bequeathing his knowledge of his 21 years of DJing skills. With Night Sounds being the one of the only readily available entertainment services in the area, the company is already booked well into 2017.

In order to keep up with changing trends and emerging technology in the entertainment industry, the Kimbles go to the Mobile Beat DJ convention in Las Vegas every spring. There, they meet DJs from all over the world, with more than 2,000 people gathering for a weekend of seminars, shows and classes.

Last year, the Kimbles took a scratching class where they learned how to use a dual-deck player, a common DJ setup that allows easy transitions from one song to the next. However, Jason says these kind of techniques aren’t always well-received by audiences in rural Nebraska.

“This area doesn’t really know what scratching is, so it’s kind of over-kill for most events,” Jason says.

Jason says the song selection and approach varies depending on the event. What is acceptable at one event may not be always fit the energy of another. However, with two decades of DJ experience, Jason says gained the ability to read a crowd’s energy and adjust the playlist accordingly.

“With a wedding you’re trying to keep it professional, romantic, not too crazy for the grandparents,” Jason says. “With [school dances], you’re wanting something go go go, something to get the kids pumped up.”

Often, Virginia has a different take than her dad, but this works to both of their advantage. As a young DJ, Virginia knows what kids her age are listening to and can give Jason song suggestions for the playlist, from pop stars like Meghan Trainor and Flo Rida. Though, it’s not always easy to get people dancing, the two point out.

“If I want to do something to get people going, then I’ll play [a song] that everyone knows, something like “Cupid Shuffle” or “Cha Cha Slide,”” Jason says.

Virginia says that interacting with a crowd is another effective way of getting people on their feet.

“Some people don’t know how to do the Charlie Brown or the Cha Cha Slide,” she says. “So I’ll go out on the dance floor and show them, then quickly come back to play the next song.” 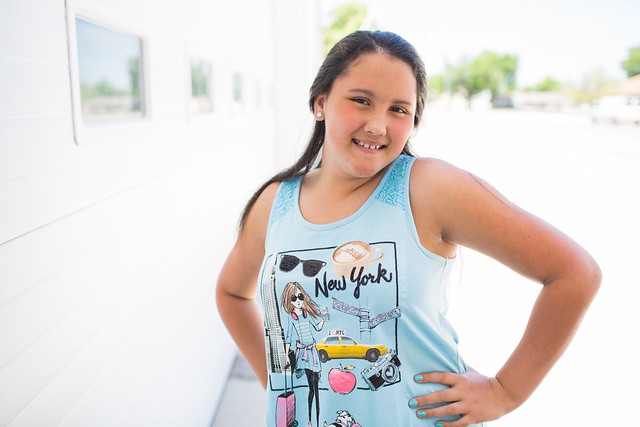 For Virginia, DJing is not only a learning experience, but also a way for her to express herself and have fun. Having just started DJing last year, she has picked up the trade quickly, Jason says. Her first solo gig was this spring at Imperial’s high school prom. The next gig she played was her own birthday party.

“It was really fun –– I invited the whole 6th grade to come and we had a blast,” Virginia says. “I was a little nervous but I did the right things, and I even danced a little bit.”

DJing has taken the Kimbles across the Midwest and out to the West Coast, some gigs lasting as late as 2 a.m., and more than eight hours in total. Virginia has learned to have a tough skin while hauling equipment and enduring late-night road trips back home. Jason says that seeing Virginia pick up DJing reminds him of when he first got started. The skill seems to be advance her confidence, and help her gain independence at a young age.

Virginia says that her favorite part about DJing has been working with women musicians each year at the Las Vegas convention.

“I didn’t know there were any girl DJs around,” Virginia says. “But at the convention I get to meet a whole bunch of DJs who are just like me.”

Virginia says playing a gig and seeing the reaction from the crowd instills in her a sense of confidence.