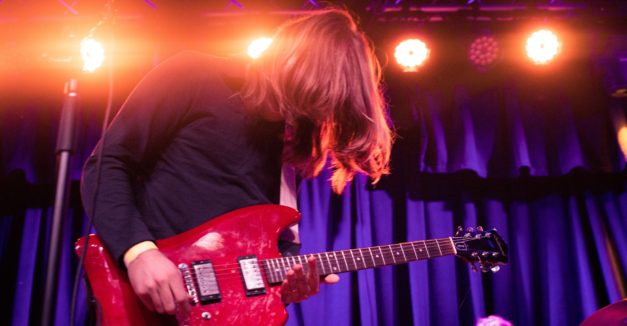 David Nance’s raw, erratic guitar-playing style is perhaps his most defining characteristic. A thick fog of rock and roll floats around even his most tender moments, always leading to the chaotic and boisterous sounds for which Nance is known.

Nance and company’s cover of The Bruces “Killer” at this year’s Take Cover was no different, presenting a more muscular, equally honest version of the ‘90s tune. The Waiting Room performance paid tribute to Omaha’s dense lineage of underground music.

The Bruces, fronted by Omaha-native Alex McManus, was active in the late 90s and early 2000s. Once described in an interview with Tim McMahan as “Omaha’s least-known renowned musician,” McManus played violin on Simon Joyner’s The Cowardly Traveller Pays His Toll, and toured extensively with Vic Chesnutt and Lambchop.

Nance’s cover, similar to the original, is full of strangely-timed chord switches that build throughout. Nance rips into his electric guitar, skittering into and out of the band’s rhythms and inserting unpredictable bridge strums. Between moments of mumbling and shouting into the mic, Nance walks back to his amp to garner feedback and noisy guitar-playing. The cover is both casual and intentional, accurately representing its predecessor.