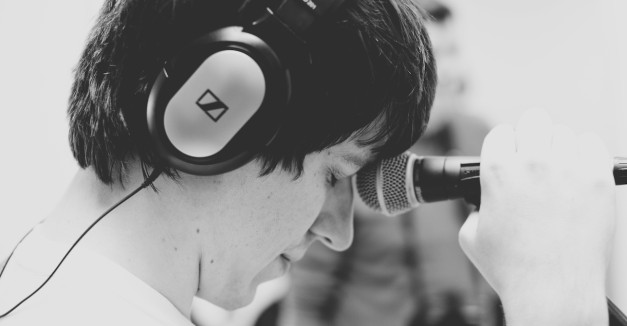 Billy Yost had sung the infectiously cynical chorus a thousand times before:

But on July 19, when The Kickback prepared to tell the crowd at O’Leaver’s Pub just how much parity they wanted in their pain, their singer had a gut-check epiphany:

When The Kickback played the following night at The Bourbon in Lincoln, the audience was similarly obliging, belting out the “Please Hurt” credo that Yost adapted from a Randy Newman song. “Please Hurt” was the song (released on 7-inch in the spring) that brought the band on the hallowed road to acclaimed producer and Spoon drummer Jim Eno. Eno, they hoped, would provide the studio presence that might get the Chicago rock band’s debut full-length over the hump, after three years of trying:

Recording With Jim Eno the Idol: “Spoon Is An Institution” by Hear Nebraska

Mid-July, in context, was an odd moment to catch up with The Kickback. The ripeness cycle of musical publicity dictates that most interviews belong in the window of a record’s completion, its release and during touring.

Speaking with Billy Yost (and the rest of the band as they wandered in and out of the Lincoln living room where The Kickback stayed on July 20) in between the tracking and the mixing of Sorry All Over The Place was a bit like dropping in on climbers halfway up a mountain and asking how they think it’s going. Or what the peak will look like. 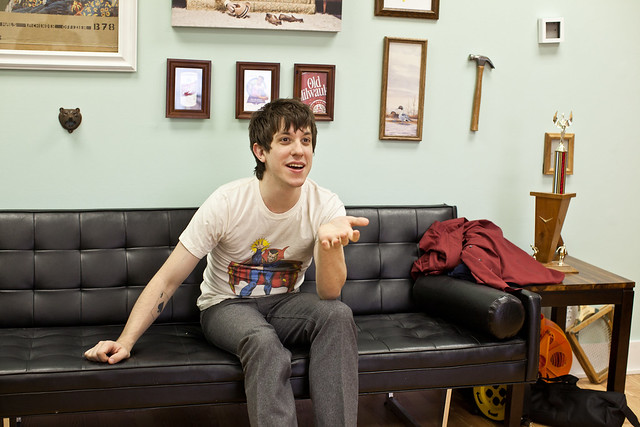 The Kickback had already spent its allotted 10 days at Eno’s studio Public Hi-Fi in Austin, tracking day and night, starting with a pool of twenty-odd tracks and paring down to an album from there.

This week, the band traveled back to Austin to begin the mixing process, but in their view, there’s still an entire album at stake. The biggest question?

Being Happy with the Record “Is Not Impossible” by Hear Nebraska

No one in The Kickback — brothers Danny (drums) and Billy who started the band after a move from Vermillion, S.D., in 2009 or the newer additions of Eamonn Donnelly (bass) and Jonny Ifergan (lead guitar) — will declare at this point that previous attempts at recording Sorry All Over The Place are completely forgiven lessons all redeemed by this latest effort. But the shortfallings did teach the value of simplicity. In Austin earlier this summer, one of Eno’s first mission statements was that the record should sound live:

Capturing the Real Sound of The Kickback by Hear Nebraska

Once the fascination of working with Jim Eno passed its disbelief phase, the band says it found Eno the producer skillful, driven and amiable, confirming a reputation backed by work not only with Spoon, but Black Joe Lewis & The Honeybears and Via Audio.

“I think I was most surprised by his attention to every sound,” bassist Eamonn Donnelly said. “He cared about every second of it.” 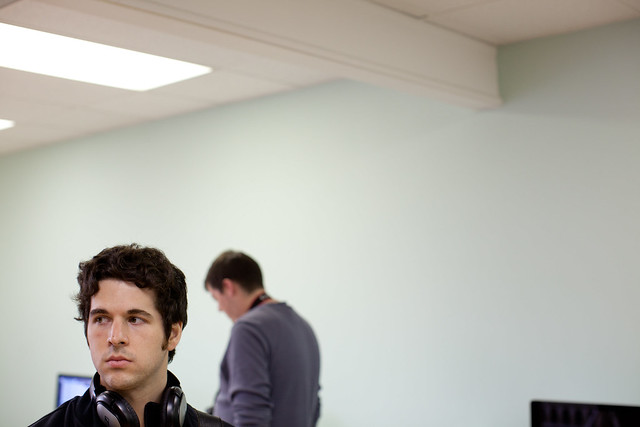 Danny Yost praised Eno (a fellow drummer by trade) for his ability to sort out the kinks between over-complicated drum fills and still capturing a live, simplified sound in studio.

And Billy, for whom vocal takes are a notoriously self-effacing experience, emphasized Eno’s deliberate formation of a “listening team.” This meant everyone in the band except the singer would evaluate the takes before Billy was allowed to listen.

“If you’re gonna be the singer of the band, you have be willing to live with that,” Billy says. “That’s a stupid, narcissistic decision you made on your own.”

The Kickback works “tense,” as Billy describes it, but one unforgettable instance demonstrated Eno’s capacity for releasing the steam from a frustrated room:

Jim Eno Salsa Dances in the Studio by Hear Nebraska

Despite the desire to capture the sound of four musicians in an Austin room, The Kickback added to 257 new members to their band for the making of their first LP. The band surpassed their Kickstarter fundraising goal of $16,000 on July 1, racking up $19,000 in total. Through every social media channel, the band expressed gratitude and sigh of relief, especially since every dime was already spoken for:

Billy on Kickstarter Guilt: “Nobody owes us anything.” by Hear Nebraska

Even though Billy preambles a discussion of his often emotive songwriting with the disclaimer that he’s “a white dude and things are fine,” lyrics like those in “Please Hurt” place themselves in a delicate and fluctuating balance between dark honesty and a mask of sarcasm and imagination. The music itself, melodic but prone to cathartic screams, solos and breaks, is an important tool in retreating from “full Elliott Smith” territory.

Still, “I want you to hurt like I do” is part of a deep shadow-self chemistry, a dark side, that Billy identifies in everyone:

Saying “The Worst Thing You Could Ever Say” by Hear Nebraska

In their most recent podcast, Billy and Donnelly describe themselves as being in a state of purgatory. Once the record is done, they’ll enlist Eno to help in the search for a label with the intention to officially release Sorry All Over The Place sometime in 2014.

In Kickback-friendly terms, if the band is their beloved Batman, the future is The Riddler, painting the horizon with a question mark. Behind the band are two and a half failed versions of a first record, 140-odd hours of tracking and 1100 miles of driving the rental car back home next week once the mixing process can’t go further.

In front of them is the potential erasure of all those numbers in favor of a simpler digit for Sorry All Over The Place — their first full-length, the magic number one:

Chance Solem-Pfeifer is Hear Nebraska’s staff writer. Click below this tagline for a bonus round discussion of Howie, The Kickback’s faux-Muppet tour manager. Reach Chance at chancesp@hearnebraska.org.

Why Are You So Sad, Howie? | Bonus Round with The Kickback by Hear Nebraska