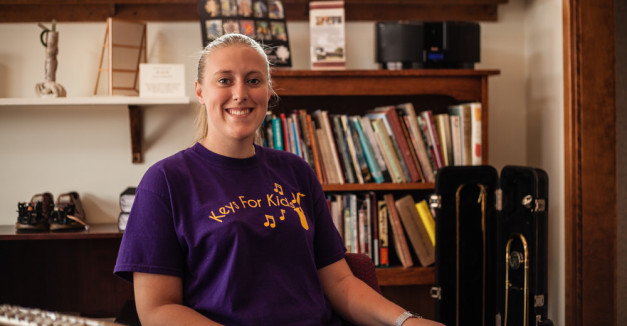 There were all sorts of positive signs Meg Michel’s Keys for Kids was fulfilling its mission to put musical instruments in the hands of students in need. There were reports from teachers that kids were coming out of their shells and instruments donated from communities outside of Michel’s Nebraska City, like Johnson, Brock, Louisville and Lincoln.

But probably nothing tops the oboe dog.

The oboe is the oddball of band ensemble anyway — double-reeded, unique voice, high degree of difficulty. But who knows what her neighbor’s dog was thinking when it pulled a long-unused oboe out of the neighbors’ Goodwill pile and tugged it down the street to Meg’s house.

“I’m serious. It was creepy,” she laughs. “The case was light enough that the dog could lift it and roll it downhill to my house.”

That charmed woodwind ended up becoming one of 22 instruments Keys For Kids has lent out to low income students since November 2013. In total, the donated instruments comprise a veritable ensemble: flutes, clarinet, oboe, trombones, trumpets, drums, a bass clarinet. The instruments have come out of the local woodwork since Keys For Kids was granted nonprofit status under the umbrella of Nebraska City Center For Children and Families. Most of the funding for refurbishing and repairing the often-ragged instruments comes from grants and private donations.

About to enter her senior year at Nebraska City High School, Michel conceived of the program when reflecting on her own musical journey. Joining her school band in fifth grade was a watershed moment for Michel, especially socially. She says that she scarcely spoke to anyone until the year before. But it was only possible because her mother’s old flute was lying dormant; the Michels were struggling financially at the time.

“It’s oddly surreal if I think about it,” Meg says. “Music is my life.”

Depending on whether you’re renting or buying, looking for new or used pieces, and, of course, the type of instrument itself, costs of starting a child in band or orchestra can vary greatly. At the very least, it’ll be a few hundred dollars. That’s an expense that families struggling with rent or to put food on the table would write off almost immediately as a luxury.

“[The instruments go to] quiet kids who aren’t going to speak up if they want to play something,” Michel says. “Or if they don’t have the money, they’ll hide it. ‘Oh, I don’t need to do band.’”

Eighteen months into the program, Michel can trace the journey of her 22 instruments —which students can play through college if so inclined — like a web around the area. She knows the school band directors and hears the success stories from the recipients, fifth graders to high school freshmen.

But she’s built that network, too. Michel says instructors are on the lookout for kids who look like they need an outlet, and Dietz and Palmer’s Music in Lincoln offer discounts on repairs and extra instrument supplies when needed (things like reeds and cases.)

Those connections exist, in part, because of the leadership strides she’s made as a flutist and singer. Michel is a second-year drum major at Nebraska City High School. Before our June 29 interview, she’d just returned from a three-week, seven-country Europe trip, singing and playing with the Nebraska Ambassadors of Music. It’s nearly 200 of the state’s best student players and vocalists, performing everywhere from London to Liechtenstein to Paris.

Looking past her senior year, Michel would like to chase a degree in music performance, or perhaps teaching, and she hopes to hand the Keys For Kids reins to some underclassmen who’ve come under her wing. The bulk of that work will be continuing outreach and staying in dialogue with music stores, potential donors and school programs.

It’s frightening or reassuring, depending on your outlook, to think what Michel’s mother keeping her old flute meant for 22 kids, decades in the future. It’s the smallest piece of a puzzle in all their lives that ended up shaping Meg and positively impacting dozens of kids.

Without that flute, no band. No program. No, well, Meg: “I wouldn’t have discovered who I was.”