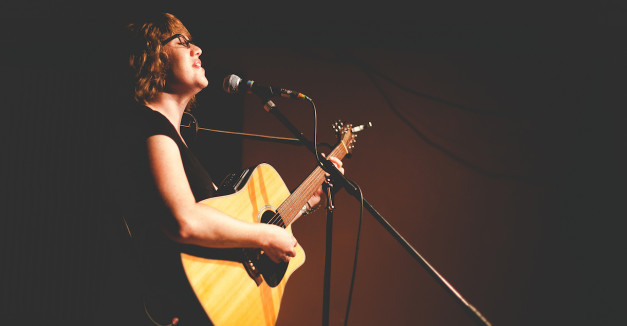 It was in the beer-filled heart of a bullet-punctured fridge that Kait Berreckman found inspiration.

Berreckman, an Omaha singer-songwriter originally from Cozad, Nebraska, used her boyfriend’s old-style General Electric refrigerator to write the lighthearted “General Electric,” one of the first tracks the musician had recorded in nearly three years.

While brainstorming for song ideas, Berreckman says she realized the fridge was too interesting to not have a song written about it. The result is a personification of that old appliance and its mysterious bullet hole.

After studying music in Boston, Berreckman moved to Austin where she pursued her music career and released an album, until becoming overwhelmed by the saturated music scene and taking a hiatus.

“I just said ‘if music wants to be a part of my life, music will,'” Berreckman says.

Eventually, Berreckman moved back to Nebraska for her career and family. It was home in the Midwest that the singer-songwriter became inspired to create music again.

“A lot of it had to do with the fact that Nebraska is where I started and it’s such a core part of who I am,” Berreckman says. “I think coming home was really powerful.”

In her 18 years as a singer-songwriter, Berreckman says she has always used a blend of fictional and biographical stories to fuel her music. “Night Owl,” her second new song, is about her current relationship with a boyfriend who stays up until the sunrise, much to her frustration.

Unlike “General Electric,” which is a bare-bones track, offering only Berreckman’s voice and guitar, “Night Owl” uses percussion and brass instruments to present its playful, bouncy feel.

Jason Burkum, who produced the two tracks, also plays bass and percussion on “Night Owl,” and enlisted Steve Echart to play the tuba. Though nothing is set, Berreckman says she hopes to produce an album or EP this year, find a band to play with and perform more live shows.