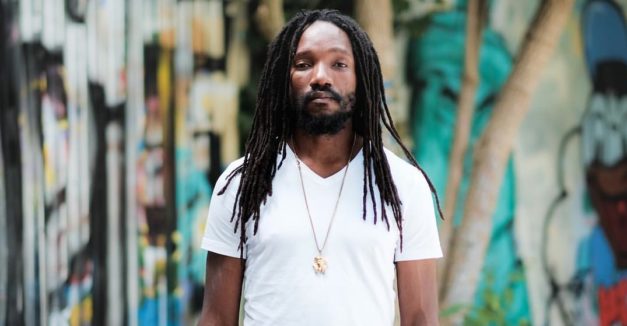 On Tuesday, August 8th, the Bourbon Theatre hosts the first Nebraska appearance by Kabaka Pyramid, one of the new generation of Jamaican performers from the “Reggae Revival” movement. While Bob Marley’s contemporaries such as Burning Spear, the Wailing Souls, and Black Uhuru have made Nebraska tour stops for years, the inheritors of the roots reggae legacy haven’t found their way to this part of the prairie until now.

Assuming you’re curious, the word Kabaka comes from the head of the Ugandan kingdom Buganda, and presumably you know about pyramids. Born Keron Salmon, the singer-songwriter and lyricist has a career dating back over 10 years and has been scoring popular reggae and dancehall tracks along the way.

Roughly five years ago, Kabaka Pyramid was among a group of younger Jamaican artists to gather regularly near a beach East of Kingston where singer and actor Billy Wilmot had founded a surfing camp called Jamnesia. This like-minded group of artists, also including Protoje, Chronixx, and Jah9, found common ground in the mission of advancing Afrocentrism through music and the arts, something fewer and fewer Jamaican performers have explicitly embraced in the last three decades. As recording artists, they soon would make guest appearances on each other’s projects, name-check each other in concert, and generally provide each other the moral support not often found in an otherwise hyper-competitive music culture.

Kabaka’s take on the whole thing is encapsulated in the lyrics to “The Revival” from 2013:

While ‘advancing Afrocentrism through music’ may sound like nothing new, for at least 30 years, the most popular continuum of artists out of Jamaica have come out of its dancehalls – exemplified most recently in the unparalleled success and influence of the genius emcee and criminal mastermind Vybz Kartel. Kartel’s aesthetic was the perfect reflection of the Jamaican youth zeitgeist of the mid-2000s, which often manifested in wanton materialism. Kartel is currently a few years into a life sentence for murder and will likely remain a folk-hero for generations to come.

The artists of the reggae revival, in contrast, saw a strong position to uphold in a celebration of an Afro-Jamaican identity, Rastafari, and an embrace of reggae and its original one drop rhythms as the music vehicle of choice. At the same time, each of the Reggae Revival artists shows to varying degrees a millennial affection for American hip-hop – Kabaka Pyramid and Protoje chief among them. Jamaica’s identity as an Afro-Caribbean society has long been informed by its proximity to the United States. While American music has influenced the development of Jamaican music since the days of Louis Jordan and Bill Doggett, one of Jamaica’s well documented roles was in providing the seminal ingredients for African-American sound-system music, aka hip-hop. (See the story of Kool Herc if you doubt this for a second, or check the video from Jay-Z’s recent trip to Jamaica to collab with Damian Marley on “Bam,” in which Kabaka Pyramid makes a minor cameo.)

If there is one thing to understand about Kabaka Pyramid, he is not a ‘pure reggae’ artist in the tradition of Bob Marley or Burning Spear. If that’s your flavor, an artist like Samory I will hit closer to the mark. Kabaka Pyramid is more in the line of artists like Sizzla, Capleton, or Damian Marley, Rasta dancehall performers who have a strong interest in hip-hop and whose emphasis on lyrical fusillades outshines instrumental virtuosity.

Kabaka seems to love rapping almost as much as being a dancehall emcee, and it’s hard to tell which he does with more authority. He embraces this duality most clearly on “Kabaka vs. Pyramid,” from the 2016 Major Laser/Walshy Fire mixtape.

For more examples of Kabaka Pyramid in action, I recommend the early Reggae Revival combination, “Selassie Souljahz,” where Kabaka trades verses with Chronixx, Protoje, and Sizzla. Also, give a listen to the lyrical climax on Protoje’s “The Flame” from Protoje’s outstanding Ancient Future LP; or “Well Done,” a harder reggae dancehall outing, based on R.E.M.’s “Losing My Religion” and first adapted by Wayne Marshall as “On The Corner.”

Carter Van Pelt hosts “Eastern Standard Time,” Fridays from 10 to midnight on KZUM-FM and is the founder and host of Coney Island Reggae On The Boardwalk. Check out his writing on Protoje and Chronixx.

[editor’s note: This preview has been updated to reflect that Kabaka Pyramid will be performing with the DJ Yaadcore, not the Bebble Rockers band as originally advertised.]