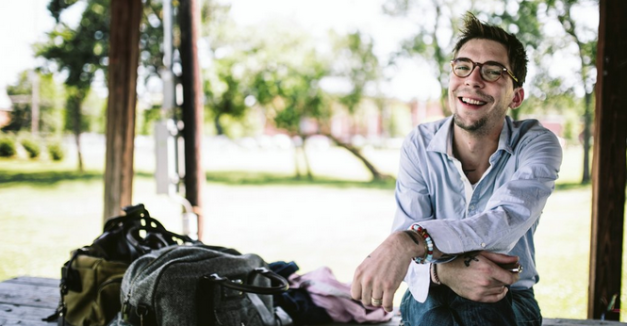 Chances are you’re not a sketch artist. You don’t need to know our main suspect has a 27-inch waist and a 36-inch inseam. That a naked woman lies tattooed across his left forearm, just below the state of Tennessee, or that his middle name is imprinted along his collarbone like a cursive bowtie.

If he writes a song about himself, Justin Townes Earle isn’t going to paint you a portrait. Instead, he’ll outline for you a wry smile, cast a bit of lonely shadow and maybe, just maybe, he’ll shine his mama’s eyes your direction. But the rest is for you to fill in.

As a listener, you won’t be privy to the time his blue-collar mother, “every bit of six-foot tall,” detached his father’s retina in a single blow. Why? Because Steve Earle is not your dad. Because you didn’t spend “31 years of being fucked up and one year of being married and feeling like everything is good.”

Because Justin Townes Earle wants to write songs that are relatable.

“Growing up in the South, we have an extremely distinct culture, probably one of the more distinct cultures in the United States,” he says over the phone with a stretched-molasses voice. “But that culture can only give you what it gives you.

Earle says being on the move from 15 to 22 years old, traveling from Tennessee to Chicago, Ireland to New York, well, that was a blessing for a young songwriter.

“I feel like my songs haven’t been stuck to my hometown,” he says. “I can’t just write bitter songs about how Nashville sucks.”

This Friday, Sept. 26 at The Bourbon, Earle will instead sing songs about single mothers, subway conductors and steel-driving men. Tickets for the all-ages, 8 p.m. show are available here.

Offering only a chorus-bound pair of white shoes, a white dress and white gardenias, Earle will embrace simplicity in what he’s called his best song, “White Gardenias,” off his most recent album, Single Mothers. The track is a tribute to Billie Holiday, who was “screwed from the start,” he says, born into the slums as the daughter of a prostitute.

Earle finds Holiday admirable because, he says, she was willing to do anything to get by, and you can hear the reverence in his vocal phrasing. “I like to sing about as far behind the beat as I possibly can,” a trademark of Holiday’s. And although Earle, like his father — the even more hard-headed songwriter — has been anchored by drug addictions, he chose to leave that part of Holiday’s life out of the song, in order for it to be more relatable.

Being newly married to his wife, Jenn Marie, Earle says he’s found a sense of steadiness that his own embittered days couldn’t boast. He looks back at his body of work, which started with 2008’s The Good Life, and he says he views it like Jenn Marie views his harder times.

“She has nothing bad to say about my past because it’s what made me the person I am today. I’ve worked on it a lot that I can say I have no regrets and nobody owes me anything.”

Amid his bristling politeness, you can hear that resolve not as an empty proclamation but rather a mature recognition of his faults alongside a wish to overcome them. Although he’s proud to carry his middle name, Earle is not only influenced by his father’s bygone idol and best friend Townes Van Zandt, who could pen a beautiful song but was, in Justin’s words, “the kind of guy who would tell the kids a scary story and then turn off the lights and leave the room.”

He’s not only the son of Steve Earle, who’d be gone “way longer than he should have been,” and who once pulled up in the driveway late with his buddies only to drive off almost immediately, after Townes fired a revolver through the roof of the car.

No, as Justin Townes Earle intimates in one of his song sketches, leaving a bit of space for you to fill in, he’s got a few more traits he’d like to highlight: his mama’s eyes, her long thin frame and her smile.

“And I still see wrong from right ’cause I’ve got my mama’s eyes.”