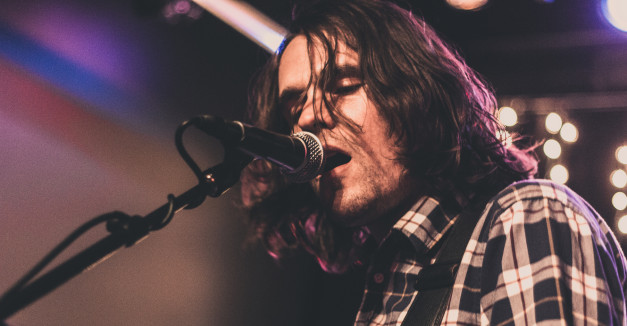 “Junk City” has never really seen the light of day.

Chris Machmuller, the Omaha rock band’s frontman, says the track was recorded while Ladyfinger worked on 2013’s Errant Forms, but it was shelved during the mixing process. Ladyfinger has never played the song live, either.

The track is a moody slow-burn that feels like a nighttime and decrepit urban space. Junk City indeed. Machmuller’s thick voice pushes the song forward, but the undeniable highlight is a stirring saxophone part that wails in the distance before exploding brightly to the fore, like a lone sax man playing a solitary sonata from some urban fire escape.

We’re thrilled to give the track its proper due on our Hear Nebraska Compilation Vol. 3. The vinyl compilation, featuring ten Nebraska artists, is released tonight at Zoo Bar and tomorrow at Waiting Room. Ladyfinger will play the Waiting Room show with Jake Bellows and Both.

Machmuller says Ladyfinger, which hasn’t had a release since Errant Forms, has been practicing regularly and is considering the possibility of writing new material this summer.

Listen to “Junk City” for the first time here: