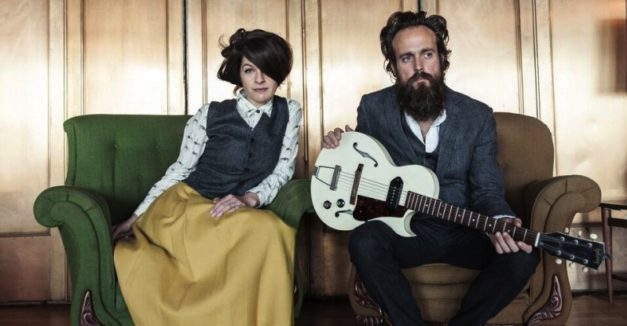 If you’re a fan enough of indie folk to know the names Jesca Hoop and Sam Beam (the latter not by his pseudonym, Iron & Wine), you may well have snap approved the news of their recent songwriting partnership.

“Of course,” or “sounds about right.”

They deserve each other as musical siblings in ways practical and stylistic. Beam and Hoop have toured together the past few years, last sharing a Nebraska billing at Lincoln’s Rococo Theater in 2013. They each write in lyrically obscure, melodically memorable yarns, two of folk music’s preeminent whisperers. They even, Hoop informs, share an untrained style of guitar picking that employs only a thumb and one other hard-working digit (Beam’s index finger, Hoop’s middle.)

On the phone, it takes Hoop about 30 seconds and a few, brain-racking “I don’t know’s” to come up with a noteworthy difference between herself and the artist with whom she co-wrote Love Letter For Fire, out this spring on Sub Pop.

“One thing I do know is his approach to coming up with songs sometimes can be a little more light-hearted than mine,” she says. “I think he might doodle a bit and then craft songs, where I might think, ‘Ok, I gotta write a song. Guh.’”

“I have what I call my torture chamber, my writing room, and I don’t think he has one of those,” Hoop elaborates.

Or at least he doesn’t call it that, probably.

“No, I think he calls it his front porch.”

It’s true Hoop’s four solo albums since 2007 pierce the heart more than Beam’s might blanket it, even if you can’t so much tell when the two sensibilities mingle on their 13 duets of Love Letter For Fire. Whether the narrating voices bicker or reconcile across the work of romance, why this endeavor is working is never anything but plain. In its own right, Iron & Wine has become an indie stalwart the last ten years, breaking out with vivid, imagistic love songs like “The Trapeze Swinger,” “Naked As We Came,”  and “Flightless Bird American Mouth.” Hoop’s lesser known ethos is more mystical, spurred by stranger melodies that sometimes recall the exoctic. Then, there’s her habit for pronouncing vowels like she’s partially from a British isle and partially channeling another planet’s idea of poetry recitation. (She lives in Manchester but was raised in the western United States, though Hoop explains her delivery as an “irrational expression.”)

You can see the pair perform Love Letter For Fire and accompanying on each other’s solo work this Wednesday at Slowdown. Tickets are available here.

Beam especially, has attributed the album’s dual perspectives to classic country influences, and the songs were born of trading digital messages full of lyrical bits and character ideas. Though the identities aren’t narratively consistent throughout, Hoop says she finds her greatest interest in the inherent conflict of a love story. And while the instrumentation is minimal, when a string part does swell and Beam and Hoop’s voices can’t seem to bear leaving each other’s sides, there’s a resonance outside Americana that’s conjured, one that befits an age-old artistic tradition of embattled lovers.

“I was in musical theater my whole childhood,” Hoop says, acknowledging the comparison but not exactly embracing it. “A song like ‘Chalk It Up To Chi’ does come from the black sheep in a family. But I’m not too fond of drama; I like understatement a bit.”

One of the record’s singles, “Every Songbird Says,” finds the two singers introducing their characters as a clear act of artifice. When they strike up over picked acoustic guitar, it’s harder not to picture two fictional people singing.

“I’m on a boat, at the turning way, for the distant horn, of a promise ring,” Hoop counters.

“When they’re put in parallels like that, you can recognize the exchange and you can get involved,” Hoop says. “For instance, we’ve been covering the song ‘Love Is A Stranger’ by The Eurythmics, which is sung only by Annie Lennox. We noticed once we took it into the duet form, there’s a conflict there and a deeper meaning drawn out.”

Hoop can’t explain what makes “Love Is A Stranger” fit for division, just that the seeds of perspective contradiction reside there; perhaps its narrative is of two minds. Of course, historically neither Beam nor Hoop has been an explainer. Even as Beam has moved from Southern hush-a-byes to jazz folk and Hoop from Ani DiFranco-esque production to bare elegies, both travel in the realm of signifiers and symbolism. You might guess only by the track names on Love Letter that there isn’t much Carter-Cash routine or festivity. “Midas Tongue,” “We Two Are A Moon,” “Sailor To Siren,” “The Lamb You Lost” — these are love songs the way a painting could be a love painting if the moon hung in the night just right, or an unnamed figure looked longingly across the blackness.

“If it was necessary to define what we meant, we would,” Hoop describes the lyric-trading that created the album, “but if we both just enjoyed the impression that the combination of words left, then we would leave it and let each other interpret things different ways.”

It’s possible then that Hoop and Beam have a full tour ahead, and one behind, during which they might understand their collaborations to mean different things. Both are poets, not so much in the commonly-used sense of someone turning a phrase with expertise, but more as writers devoted to language’s own properties, its magic, baggage and if you can forgive the oxymoron, universal relativity.

“That’s a gift the song can give to any listener,” Hoop says, “the freedom to use the words how they want.”