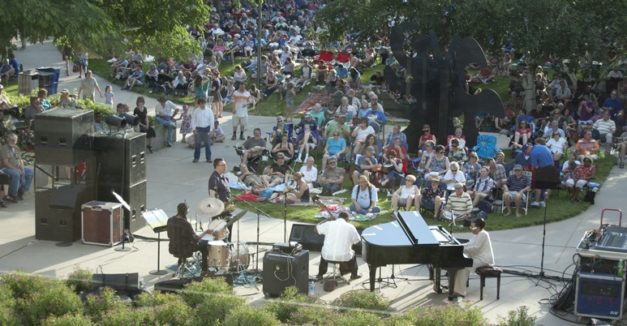 It was 1991, and The Sheldon Art Association thought its new live jazz program was a long shot. It had all the pieces except for money to pay the artists: the lawn, speckled with sculpture, and the balmy midwestern June. It had patrons and an untapped demographic, the college students that clung to internships and passed the museum en route to class.

That year, the SAA hosted the first Jazz in June to attract young professionals and students to the museum. Tonight, the event that once didn’t expect a profit or enough money to pay its acts is celebrating its 25th anniversary. It continues the tradition every Tuesday night this month, hosting live jazz musicians at 7 p.m. at 12 and R Streets.

Jazz in June coordinator Spencer Munson credits his love of community planning to Jazz in June. The current DJ (he performs as Spencelove) and The Bourbon event coordinator went for the first time in 2001 and watched the audience grow from a few hundred to a few thousand each week. Munson said people now come mid-afternoon to stake their spots.

“People come from all walks of life,” Munson said. “All these people appreciating music and culture and art — it almost makes you feel like you’re not in Lincoln.”

photo courtesy of Jazz in June

Traditionally, Jazz festivals make homes in bigger cities and Jazz hubs like New Orleans, Kansas City and Nashville. Yet Lincoln’s festival continues to expand, raising awareness beyond the Sheldon Museum of Art and establishing itself as a center for the genre. The event created a board of ambassadors of University staff and members of the community with hopes to broaden it even further, ultimately hoping to be community and cultural encompassing.

Booking Arturo Sandoval was the first step. The well-decorated Cuban jazz musician is a jazz giant who Munson expects will attract thousands to the Sheldon’s lawn when he kicks off the series tonight.

“[Sandoval] has been a name Jazz in June has been wanting for a long time,” Munson said. “It was just waiting for a big event.”

Martha Florence, former Jazz in June chairperson for 23 years, credits Jazz in June’s 25 year success to the culture and opportunity bringing in well-known artists like Sandoval to Lincoln.

“Sandoval is from Havana and when was the last time you could see somebody from there?” Florence said. “It’s the kind of music and people most Nebraskans wouldn’t meet or hear if it wasn’t for Jazz in June.”

But longevity doesn’t come from only booking international jazz artists. Florence believes that Jazz in June still thrives because of support from the Berman Music Foundation, which provided community support and funding in the mid-1990’s. Today, AAA encourages drivers passing through Lincoln to stop by the event, artists from around the country call with performance inquiries and people don’t just happen upon the event, they seek it out.

In honor of its loyal patrons, Jazz in June is bringing fan favorite Lao Tizer back on June 14. The composer and contemporary jazz keyboardist played Jazz in June in 2008 and 2012. This time he’s bringing his quartet and Grammy-winning saxophonist Eric Marienthal.

Tizer and 14 other musicians, including Marienthal, are working on an album and video set to release in 2017. The band will play a few of the songs from the upcoming album during their performance.

“Lincoln had one of the better audiences anywhere,” Tizer said in a recent phone call. “It’s the most CDs we’ve ever sold at a live show.”

The last two Tuesdays are dedicated to local talent. Jackie Allen, one of the most decorated Nebraska-based artists, plays June 21 and Tim Doherty’s 9plus1 plays June 28.

After 25 years, Jazz in June is a thriving cultural event that Munson believes will only continue to grow. Look no further than the board’s recent changes, which involve expanding the event to include a bike valet, 15-20 different vendors, garden tours and yoga classes. The effort demonstrates the organization’s commitment to the next 25 years.

“I’d like to make it a Midwest event,” Munson said. “Something people travel to see.”

Editor’s note: an earlier version of this article listed Munson as “former” Bourbon event coordinator. It has been corrected.