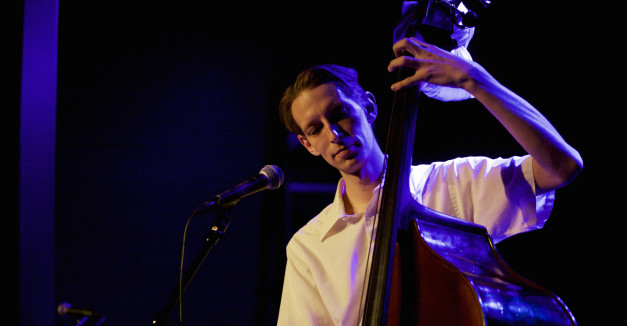 If you’ve been around Omaha music the last decade, James Maakestad may seem familiar as a guitarist and vocalist from the defunct folk groups Bear County and Gus & Call. The latter was born out of the former, despite their aesthetic and mood differences. And you also might know Maakestad as the upright bassist and supporting singer in McCarthy Trenching, his folk duo with songwriter Dan McCarthy. In that capacity, his bass-playing institutes a foundation upon which McCarthy’s both funny and touching songs swell to their wily best. And then Maakestad’s voice is there to catch them in harmony on way up.

But what brings him to HNFM is his solo work. It’s a project known by Omaha music regulars, but probably not beyond. As a solo artist, Maakestad is not a hugely regular performer, nor are his songs available on recording. But in those songs, we’ll wager you can find the pieces of his allegiances to the those other bands and the skills he’s honed in them.

As a solo artist, Maakestad’s reedy and dead-on voice, which journeys into his higher register as a supporting element, can nearly turn to soaring. In his acoustic guitar — which will inhabit several alternative tunings — you’ll find the precision, the patience and the tonality that many would say was the transcendent strength of Gus & Call.

Catch Maakestad live at O’Leaver’s on April 30 for a show with Oquoa and Miniature Horse. RSVP here.