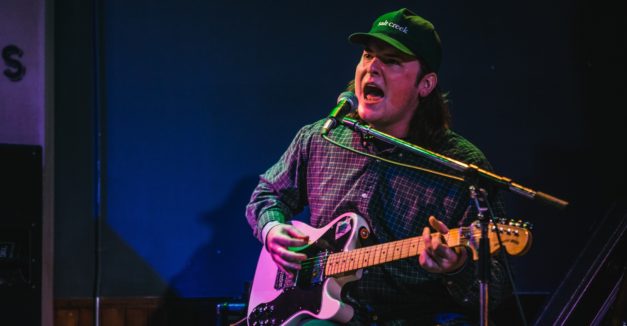 [The following was read live on the air to introduce Jacob James Wilton, prior to the singer-songwriter’s in-studio performance at KZUM for Hear Nebraska FM. The Omaha singer/songwriter plays Yia Yia’s Pizza this Friday, Feb 17 with Shit Flowers and Good Morning Midnight; RSVP here.]

You may know Jake Newbold from the garage rock project Super Ghost he fronts out of Omaha, and, thus, you may know him for the biting scream, dynamic rhythms and torrid chord progressions therein. In fact, the quartet shook this very room in October 2015. In that band, Newbold has an angsty, cathartic way of releasing a bevy of personal feelings, including watching in horror at a friend derailing while trying to stay on one’s own tracks.

But his story is different on his own, as Jacob James Wilton, the name he was given by his birth parents prior to adoption at age. The project lives on the opposite end of the spectrum of Newbold’s work, the songwriter trading razor sharp guitars for glistening ones, that scream for a soothing coo. The songs carry an early-aughts sparseness one might hear in early Justin Vernon or Blake Sennett pennings. The scars are more tangible, the doubt lingers longer and the weight of the past is like everything and nothing at once.

But there’s still a glint of sunshine, as if Newbold were pouring his heart out to you on some lazy, partly-cloudy afternoon. Recorded with The Way Out’s Levi Hagen, his new EP Watazoa, SC, has the same lonely cabin feel of the Blood Bank EP,  with every sigh, every creak, every guitar-string-glancing finger audible on tape. It makes the collection even more personal.

It is neither afternoon nor lazy here at the KZUM studio, but Jacob James Wilton is indeed in the house. Here is with “Sweet Honey June”: