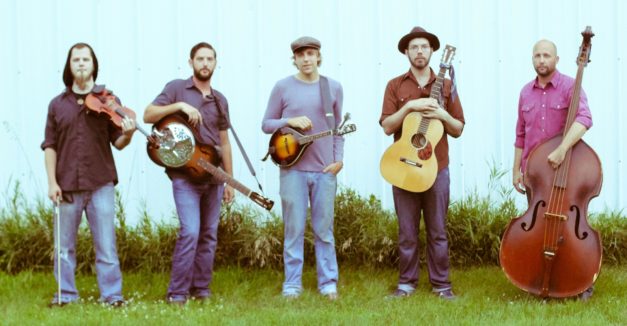 [Editor’s note: Jack Hotel’s Voices From The Moon is out Friday, May 13 on Sower Records. Dive in below with our On The Record album review podcast and feature interview. Jack Hotel plays Zoo Bar Friday with Walk By Sea, blét and Matt Cox. RSVP here.]

Fiction writing is often romanticized by both reader and author. A few minutes into a long conversation about songwriting, Jack Hotel frontman Günter Voelker cites a theory by contemporary fiction writer Robert Olen Butler. Essentially, Butler states that one’s unconscious, free-flowing dreamspace, rather than the analytical self, yields good or true works of art.

Voelker doesn’t buy the Pulitzer Prize winning novelist’s philosophy. He points instead to Leonard Cohen, who talked about bringing all of one’s selves to bear on any given creative endeavor. Voelker sees it like this: there’s the unconscious self, sure, the part responsible for the lightbulb that flicks on when a good idea appears. But then there’s an analytical self, an egotistical self, an arrogant self; all of them carefully considering the impact of songs.

Simply put, songwriting can be messy. The selves are invading each other, intertwining and drowning each other out. It’s far from romantic.

“I think there are parts of almost every creative act that are inextricably conscious,” the Lincoln folk band’s frontman says, seated at the dining room table in his Near South home. “Especially songwriting, where you’re bound by a lot of rules, like rhyme and timing and structure.” 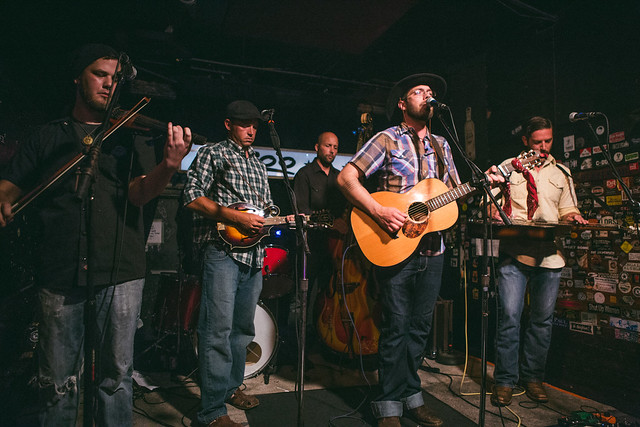 We chat in the exact spot in which the Lincoln folk band recorded its sophomore LP, Voices From The Moon, which releases this Friday on Sower Records. The hardwood floors creak slightly with movement, audible at certain points throughout the album. Multiple crowded shelves of books are the visual representation and primary source of Voelker’s literary writing style, shifting from multiple short story arcs on 2014’s Good Sons And Daughters to crafting moments and feelings in time. Combined with memorable, often sweetly delivered melodies and classic folk instrumentation — dobro, mandolin, violin, upright bass — it gives the record a decidedly lived-in feel.

But behind the natural way Voices From The Moon plays is the very calculated decision to make the record at home. More than for its own sake, Voelker says the new songs demanded it.  He raves about his experience making Good Sons and Daughters at Fuse Studios, but the creature comforts of home are why someone like Dave Grohl would build a $250,000 studio in his basement and call the product a “home record.”

“I liked the idea of holing up and concentrating on recording in isolation,” Voelker says. “We needed all the time to develop all the direction and instrumentation.”

The careful consideration and deliberate experimentation afforded at home led to tracks like the jagged, menacing “Counting Tower Blues.” Voelker says his use of “four-and-twenty” (as in “Sing a Song of Sixpence”) came from experimenting with how words fit into rigid song structure. The resulting imagery is striking: sweating cold, alone and wet, a half-smoked cigarette smouldering bedside and the click-clacking of train tracks ticking off the subject’s deficiencies.

Or take the downhearted “Two Bar Town,” the creation of which Voelker recalled by making sounds with his mouth to fit the melody and chord structure. He eventually formed the words of the chorus and title, the concept arising from working within the mold.

“It’s my unconscious mind and my artistic self that latched onto that [idea],” Voelker says. “There’s something deeply melancholy about that that I can explore, but it’s absolutely conscious how I went about it.”

On the other hand, Voices From The Moon also explores the literal unconscious. “Memories Of Flying” is quite literally about Voelker’s experiences in lucid dreaming as a child, in which he had a technique that allowed him to explore his neighborhood from the sky. And despite the backstory that Voelker readily explains, the song is also one in an album full that chases a feeling, and around which the listener may fill-in their own details. Ultimately, the essence is the same.

“It feels very real that I could fly … it was my secret and I knew not to tell people about it,” Voelker says. “That whole song was targeted at that feeling and how uncanny that is to now it’s not possible.”

Don’t let the exercise in songwriting analytics distract too much from how delightfully jammy the record feels at times, especially on its A-side. That’s thanks to the band’s familiar cast of Marty Steinhausen, Joe Salvati, Casey Hollingsworth and Josh Rector. A prime example is “Hattie Barlow,” an upbeat romp as close as anything Jack Hotel could fit into Bud Heavy’s driving folk catalogue, a cavalcade of strings and the top of Voelker’s register. “Counting Tower Blues” really digs into its nervy blues with guest pianist Dan McCarthy (McCarthy Trenching) and electric guitarist Shaun Sparks (The Allendales).

With all of the trial and error, Voelker gives himself as many possible at-bats to hit the proverbial home run. The space and repetition allow the subconscious to work. Maximize your chances to find that nugget and the more likely it is to appear.

So while Voelker may take issue with the unconscious as the sole source of creativity, he doesn’t dismiss it wholesale. Rather, Butler’s theory is a tool, part of the multi-faceted process that brought Voices From The Moon to life.

Catch up with the latest On The Record podcast reviews with the playlist below, covering albums by Unmanned (formerly Powers), Josh Hoyer & Soul Colossal, The Thermals and more: