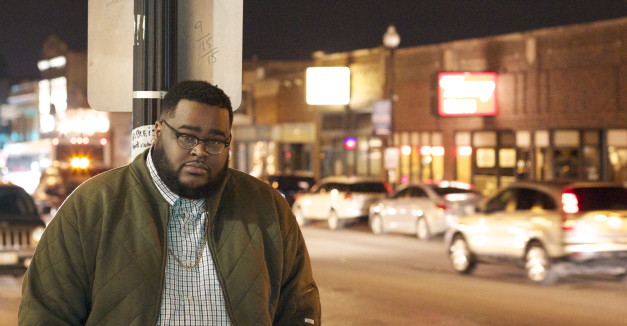 Years before serving in youth outreach, before he was one of Omaha’s up-and-coming rappers and before he could operate a moving vehicle, 15-year-old Joshua Crum became severely ill.

He woke up in the hospital one day, a giant tube protruding from his head, arms strapped to his bed to keep his flailing limbs from ripping out his IV. At the time, doctors diagnosed him with a subdermal empyema, later leaving open the possibility of West Nile Virus.

Either way, Crum was in the hospital for nearly three months. When he was released, it was like living on borrowed time.

Trying to make sense of the situation, determined to find an outlet, he started writing lyrics and making beats. Crum would join schoolyard rap circles with strangers just to test his skill. When he received positive feedback, he knew he was onto something.

“I was socially awkward, so I didn’t know how to really say what i wanted to say by just talking to people,” Crum says. “So I started writing it out.”

The north-Omaha rapper cut his first mixtape at 17. He believed it was his purpose, to impact people through music. Now 27, with six years of serving underprivileged youth on his resume, he’s making positive changes with more than just his rap game.

He sits Tuesday night at a hightop table in the Aroma’s/402 Arts Collective building, after having spent the day at his job in North Omaha. The rapper known as J. Crum is, by day, the training and development coordinator at Omaha’s Hope Center for Kids. He spends 40 to 50 hours per week working with underprivileged youth, equipping them with the tools to finish their education, secure and maintain employment and carry a strong faith.

In many ways, his new full-length album Black Sheep is for those kids. Crum eschews what he thinks of as popular but harmful rap tropes of wanton spending, drug usage and gang participation. From its emphatic opener “Anti-Establishment” to its hammer-dropping single “Hearts Collide,” the album is a social mission statement and a flaming torch of faith. J. Crum celebrates its release Friday at Alchemy (RSVP here).

His mission reaches far beyond the album, where he’s worked in the inner-city for more than six years. In his experience, rappers with the wrong message get pushed to the forefront, perpetuating stereotypes that become internalized through repeated message.

Crum considers himself a willing outcast from that crowd, and undyeable “black sheep” that accepts the role-model status humbly, whether it means rap success or not.

“I’m a firm believer of us as artists have a responsibility … for everything that we say on that microphone,” Crum says. “Through the job that I have, I’ve seen young people’s entire life view be shaped by a series of songs. We have to understand that what we say is extremely important.”

Every ounce of that passion is laid out on Black Sheep, from its socially conscious message couched in Christian values and imagery, to the wide-array of musical and artistic influences present. Through the first three tracks, the album blasts through dark-cloud hip-hop, metal-infused hooks and pop chord progressions that, in concert, make Crum one of the most dynamic live acts around.

Crum isn’t shy about his musical influences, which range from standard to seemingly ridiculous. Sure, he counts the likes of Kanye West and Lupe Fiasco among them, but growing up, he was the kid who lied about listening to Tupac while Fall Out Boy blasted through his headphones.

“I listen to hooks sometimes and I’m like ‘Man, how would Patrick Stump do it?’”

Crum used to be in a metal outfit called Water’s Edge (“It’s not that good. Don’t go look for it.”) and it has impacted his sound in a strange yet important way. It’s the Linkin Park vibe you hear in “I’m Winning,” Black Sheep’s pop/rock second track.

The first time he performed with a band was kind of an accident, an impromptu jam with his preceding act at Liberty Christian Center in 2008. Since then, with a backing band full of talented, tight-knit players, he hasn’t dreamed of doing it any other way.

“Once you start with a band, the [stage] presence is so much better, so much different than with tracks,” Crum raves. “There are so many different dynamics you can take it in.”

Now, it’s part of an image projected in more than one spotlight. His fans and the Omaha music community see it. His kids see it. The image isn’t molded by corporate constraints or anger or frustration. As Crum says, he lives for one, the life for which he was destined, by one way or another.

Music, like prayer, is only the call to action.

“Everything you hear me say, understand i’m out in the community trying to make it happen. I think a lot of people talk about it, but if all you’re doing is rapping about it, you’re not really doing anything.”