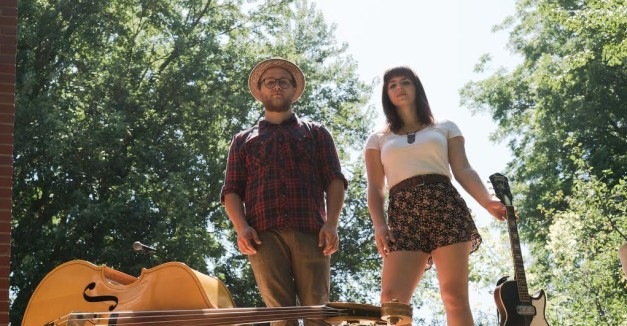 It’s an unsettling feeling, stuck in that space between dwelling on the past and leaving all of the bad memories behind.

Beth Bombara’s deep, soulful voice trembles slightly as she starts in on “It Slips Away.” She sings “I’ve got one foot in the water and one foot on dry land,” as if weighted with the decision to either stabilize or succumb. A mournful minor-key harmonica colors the distress.

And then the narrator in the St. Louis-based folk singer’s tale seems to gather strength as the song floats along, backed by Bombara’s husband Kit Hamon’s light suitcase-kick taps and gentle upright bass. There’s comfort in the notion that what’s done is done, and reprieve will come, no matter how far on the horizon it sits now.

With two feet on a second-story deck in north Omaha, Bombara and Hamon perform “It Slips Away,” in the latest edition of Love Drunk

Performed live and in a single take on a second-story deck in north Omaha, Neb., Sunday, July 11, 2015