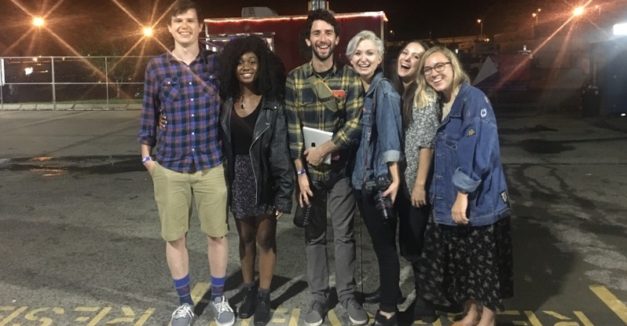 The fall semester is in session, and that means another crop of Hear Nebraska interns have hit the beat to cover all things Nebraska music.

The 2016 Fall roster includes newcomers Tarah Dawdy and Connor Lepert on the multimedia side and editorial intern Jhalisa Robinson. Also, welcome back returning multimedia intern Lauren Farris and former editorial intern Gabriella Parsons, who has shifted into a marketing role.

HN social media followers may have noticed their informal introduction after Beer Nebraska. Get to know them better below, and say hello when you see them in person.

During my time as in intern with HN I hope to use my skills in photography and video to make interesting visual content that helps artists tell their story and in turn, engage more people in their work.

I would like to challenge myself to create compelling images that convey the unique energy, moments and feelings of shows that I cover. I hope that for readers who may be unfamiliar with an artist I am covering I will be able to tell an engaging story that makes the reader want to listen or attend a concert. I think that sometimes with local music there is an initial hurdle to overcome in getting new listeners interested in an artist they are unfamiliar with. I hope that photos and videos I create will inspire new listeners for the artists I cover.

I also want to learn more about artists who are active in Nebraska currently as I spent a great deal of the past year traveling in and out of the state for work and I’m not as well connected with what has been going on locally as I have been at times. I hope to gain a better understanding of aspects of music that I don’t currently know about such as sound, production etc. I currently have knowledge as a music lover and concertgoer but I am not a musician myself. I am excited to learn first hand from individuals who do make the music and have intimate knowledge aspects of music that I don’t yet know.

My discovery of Knickerbockers came at a time when I was feeling the frustration of only being able to attend all ages shows or had to obtain a permission slip from my parents to get in to certain venues. Having access to Knickerbockers and local music like the JV Allstars, which echoed my own musical taste at the time, made a new and unfamiliar place begin feel like home.

The most recent show I attended was The BAY’s phase 2 launch with Bernardus, Evan Bartels, Mesonjixx, Red Cities, Gates and Oketo. A beautiful night of local music.

The spring concert series at the series at The Sheldon made me realize that visual art and music are incredibly impactful when they come together in one event and that Lincoln has an exceptional community of creators. During the concert series, I saw I Forgot To Love My Father perform for the first time, they did a body painting performance piece as they played the show and to this day it is one of the most creative live shows I have attended. Seeing IFTLMF perform and others as well, made me more aware of the talent and creativity present within Lincoln and made me proud to be a member of this community.

I’d like to gain a better understanding and appreciation of hardcore, metal, screamo, punk, post-punk, their sub genres and everything in between. Even trying to classify or name these genres is foreign territory for me so I would love to learn about the styles, history and current presence of this music in Nebraska.

Olivia Bee – I have followed her work for a number of years and I greatly admire her growth as an artist. Her range and ability to capture youth and the process of growing up in a beautiful, truthful and honest manner inspire me tremendously.

My unique point of view in my photography and videography. Creative content creation through video and storytelling.

I hope to improve my photo and video skills and collaborate in a professional environment. I’d like to primarily increase my confidence with that professional work and establish a following of some sort

I think one of the earliest times I realized that music and art impacted our community was in 2003 when Grasshopper Takeover had their van stolen. I remember there being news broadcasts and articles about the situation and I remember Grasshopper Takeover using those broadcasts in their album Elephant Dreams. I thought it was really cool that the community of Omaha worked to support one of the city’s most popular bands at the time.

I think I’d like to explore something in the EDM or even the hip-hop realm. I am more comfortable with hip-hop, but not really on a local scale, and EDM is something I very rarely listen to let alone in the local scope.

I don’t necessarily have an idol in music journalism per se. However, Dave Grohl is my musical idol and in a sense he dabbled in music journalism with his series on HBO Sonic Highways and his documentary Sound City. Dave Grohl is not only one of the greatest rock musicians of all time, but also despite his fame he still makes a point to promote his art and stays true to his art. He also, despite being a big time musician, still looks out for the little guys. He still supports underground and indie bands.

The audience should expect an eager and aggressive outlook of appreciation for life and music in Lincoln, and myself. That is what I want to expose my outlook and insight of being a part of that audience, as well. I feel advertisers and writers forget that we are part of that audience, and we should have high expectations of Hear Nebraska’s content, as well as individually.

I hope to improve my social anxiety by being able to talk to complete strangers in loud, stressful settings, and obtain information. I want to be able to write story ideas faster, and put them in motion on my own.

The first concert that I went to was an Oketo concert at the Bourbon, but it was before they were “Oketo”. They were Jeezlepeats then, and I actually liked that name so much better. The REAL last concert I went to was Logic at the Sokol in Omaha.

I had my realization when I started to get deeper into conversing with other artists in the community, and how we shared similar ideas and perspectives on how to empower and influence the community. I noticed that I started using my Facebook profile pictures and Instragram page to promote my own feminist poetry.

I would really like to work with CJ Mills because I have only seen her live once, and I think she is the most versatile artist in Lincoln right now. Her range with high and intimate turnouts of venues across Nebraska, and her ability to mold her voice and sets to the liking of her audience without losing her authentic sound.

I would really like to dive into the femme metal sense during my internship. Musically, metal is not in my comfort zone. On the other hand, I would love to learn the Nebraskan history of feminist metal groups that are not being looked at close enough. Politically, I could jive with that.

I really look up to Roxane Gay. I understand that her work is not exactly editorial, but she is a writer. I have grown very fond of her perspectives on feminism the past few years of my life and path into womanhood. Her work really opened the door for me, and created this blossoming effect in my mind to challenge how think about my oppression, surroundings and writing.