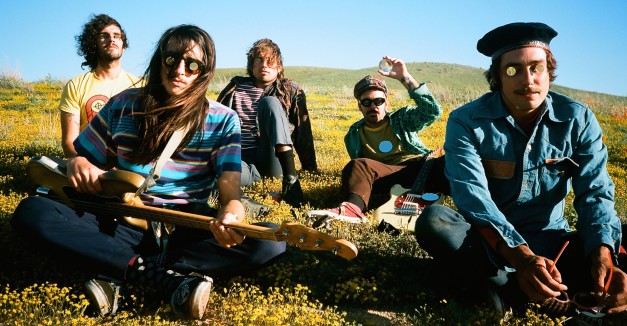 The Growlers’ Chinese Fountain boasts enough coastal sunshine in its California beach rock to transform the most bitter Nebraska winter into warm, hazy dreams of an Orange County music festival — specifically, theirs. They launched the Beach Goth music festival in 2012, featuring bands like Bleached and The Drums.

The band has a way of trickling layered guitars in their classic West Coast beach in a way that sounds both fresh and nostalgic, like something you’d recommend to both your dad and your Top 40-happy younger sibling.

In their fifth full-length release, The Growlers remain consistent in its freshly-sunburned-on-the-beach style, but evolved to grab more decades to add to an already diverse influence of psychedelia and country. The title track bumps disco beats but stays true to garage sound with distorted guitars complementing the synth-heavy keys.

The Growlers will bring its California-bred surf rock to Omaha’s  The Waiting Room on Sunday. Garage rock American Culture opens.

We talked to vocalist Brooks Nielsen on the phone Thursday, as they were prepping for tour.

Hear Nebraska: Now that you’re on the road with these songs from Chinese Fountain, which part of the album has grown on you the most?

Brooks Nielsen: Which part of the Chinese Fountain album?

HN: Yeah, or which part of it feels the most like, “We really did that right?”

BN: I don’t know. I don’t think there was anything like that. They all feel right. We got to play fresher material and it’s gone well with the fans so we kind of just own it.

HN: I am curious, what does a Chinese fountain actually refer to?

BN: Luck. And I think I kind of just worked with that. We can work really hard through it, but that’s not everything. We’re so reliant on luck.

HN: Do you feel this album is lucky, then?

BN: Yeah, it excelled, and [all the albums] have immediate rewards. People are doing it, telling you about it and feeling out new tours and momentum, so they all feel lucky.

HN: In songwriting, how much of this album has matured from your previous releases?

BN: I don’t know. I think barely. We kind of just tickled ourselves. We didn’t have a whole lot of room to just grow a lot in a short amount of time, put a lot of effort in the cannon and make a record. I think we’ve given ourselves enough time to breathe. It’s not a large jump, but it’s kind of a gradual growth.

HN: Where do you gather songwriting inspiration?

BN: Me, personally? Very close relationships with people directly around me, and myself.

HN: I noticed there’s a sense of struggle in songs like “Going Gets Tough” and “Good Advice.” Why do you slip in sadder lyrics with such sunny guitar riffs?

BN: Because we’re balancing each other. I think I’m always one to talk fast on the slow songs and take my time on the fast ones. I don’t know what happens, but there’s something that triggers it. I can’t explain.

HN: Do you think the pairing makes it ironic or does it make it more uplifting?

BN: I try to put a little bit of both into it. A little bit of a dark side with a side that’s common, something everyone can relate to. I think it’s a nice balance.

HN: I read you had the opportunity to work with Dan Auerbach from the Black Keys but decided not to. Why is that?

BN: That was for a different album. Yeah, we got to work with him and he was wonderful and we had good experience, but I just planned it out the way I wanted it to be. I had cold feet. So I scrapped it and went somewhere else with the record.

HN: Was that for the album before Chinese Fountain?

BN: Yeah, there was an EP [Gilded Pleasures] in between but Hung at Heart was the record.

HN: So who did you work with for this album? Anyone with notoriety?

BN: We worked with our manager at the time, JP Plunier. He always wanted to represent us. But his past record deal was down and had a varying style, I guess, or he was just too close to us to do it. But we finally gave him the opportunity and I think he did a good job. He’s somewhat serious and he was able to get in between all of us.

HN: I noticed your music is consistently casual in sound, yet it doesn’t deal with cliché themes like surfing or summer fun, you know, like a lot of ‘60s surf rock music. Do you think you’d ever try to stray away from that sound, match the dark lyrics more and dive into something heavier -sounding in the future?

BN: Definitely. I think we’ll have to for some records. I don’t know, that’s kind of … words change so quickly and so does the industry. I get tired of doing the same thing and just try a different style. There’s a lot more to go.

HN: Going back to that casual ‘60s surf rock sound, do you ever think about trying out the cliché surf themes in your lyrics?

BN: That’s more of the band’s doing. I think I’m not hearing a lot of things other people do. I guess we kind of pigeon-holed ourselves in the fact that we like certain gear, as well. I mean, the gear isn’t exactly getting any cooler or more attractive and it’s kind of a heyday in the making of this cool gear. What other band gets the opportunity to buy different guitars and different amps? I think that’s a lot of our sound. We got these awesome ‘60s amps seven years ago, so we’ll speculate that until we find some from the ‘80s. But they’re not being made right now.

HN: Other reviews I’ve read have noted country influences in your music, and when Hear Nebraska last interviewed you in 2013, you did say you listen to a lot of country. How do you intermix that with the ‘60s-style surf rock?

BN: There’s some similarities. A lot of surf stuff is very country. So I think it’s always been a little intermixed. And that twang — both the surf and the country have it. I wouldn’t consider myself a country singer or anything. As I get older, I think I’m more legitimately prepared for it because I can’t write country songs with the surfy feel. That’s just ridiculous. But I like to get emotional.

HN: You guys started a festival called Beach Goth. What inspired you to start that?

BN: Money. Purely money and drugs [laughs]. It came from a constantly touring band here and the rest of the world. It’s in these venues and clubs and theaters and it’s abiding by the same rules. We kind of realized what we needed to do. We thought it should be fun. So we teamed up with friends and were trying out weird ideas so it’s been successful so far.

HN: What bands are you most excited for this year?

BN: We’re getting ready to have that talk. Who do we got? We’ll see, but the names are pretty all over the place right now. We don’t want to be pigeon-holed into one specific genre. You’ve gotta find that niche. Bring them all together.

HN: So you try not to just do bands you would label as “beach goth,” and you try to mix it up a bit?

BN: We’re not taking any of that seriously, with that label. We even tend to contradict ourselves.

HN: Do you see yourselves existing outside the industry at large with your output?

BN: Honestly, we just keep fixing our bubble and keeping ourselves in there, kinda stuck in our own little world and not seeing anything that’s going on. We’re just going to keep ourselves entertained by creating new stuff for the people who are looking at our bubble.

HN: Do you ever have conversations with people who ask you why you put out so many albums without waiting in between them?

BN: Yeah, I think in the beginning, they were giving us a lot of shit about no label. Then you have people telling you, “Hey, this is how the industry works. You have to put out a record, play it live, give it a campaign, wait and then get back into songwriting. But at the time, I was too excited and easily bored. I just wanted to fill up with a lot of stuff to prove to myself that I could actually write. Now that we’ve proved that, we can slow down a little bit. But at the same time, nothing is certain in this industry anymore. Things are constantly changing. And then we have those days where we talk and we know we have to follow the guidelines.

HN: Do you feel like your output is taking advantage of the songwriting and creative process you have right now?

BN: No, we’ve had some morbid thoughts of it dying at some point. I think everybody’s attention span is built for us making songs as much as we can, play as much as we can. For people who happened to figure out how to make money off this, it’s difficult for them to be like, ‘I can’t keep up because I have to market and sell the music.’”

HN: Because you write so often, do you follow a first-thought-best-thought mentality or do you tend to revise your lyrics?

BN: If I’m sitting there writing, usually it’s first thought, then I’m done and I probably wouldn’t even go back. If I work through enough, I can get the song pretty much done. If I make a lot of headway on it, I can see it in it’s actual form and I don’t touch it.

HN: What’s next after tour?

BN: Writing, again. For me, I think, this has been a long road here without much of a break. I think we’ll need to find a way to get some type of break feeling when we go to Mexico. I’m not really happy so…

HN: Do you ever write while you’re on tour?

BN: Generally, I think it’s been working to keep it split for us. Touring around is a lot of work to do because we don’t have a record label or a team doing much work for us. It’s us doing it, with one or two other people. So we have enough work just to keep this thing flowing.

HN: Do you guys think you’ll always subscribe to that DIY mentality?

BN: No, I think we’re sliding by everybody and getting more of what we want right now. And we’ll stick around until the records are in their faces and they can’t help but notice our success. And, you can’t really stop people if they want you. It’s kind of hard to dissuade people that want to be a part of your output.