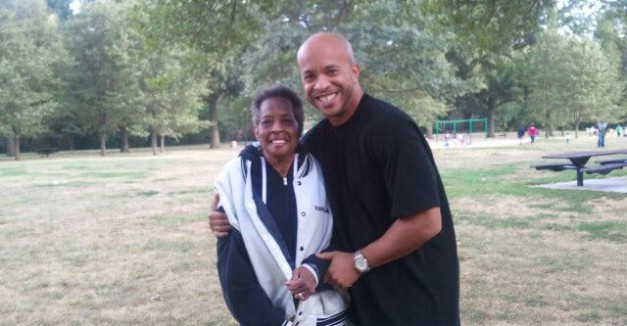 I was born and raised in Omaha. Not just Omaha, but the heart of North Omaha – 25th and Ames to be exact. My blood runs North Omaha. Saratoga Elementary, Lozier’s Basketball Court and Phil’s Foodway. These places nurtured, fed and raised me just as much as my mother and father did.

But there was one place that has always held a special place in my heart. That was Leola’s Records and Tapes.

This amazing world at 5625 Ames Avenue could take me anywhere, way past my neighborhood and way past my poverty. I remember being so hyped to catch the bus to Miss Leola’s to spend my paper route money and cop my first Brandy tape in September of 1994.  You would walk in and she knew who you were. You’d hear this motherly “Hey babe” from behind the counter and she’d ask you what you were looking for.

On Feb. 19, 2016 we lost Miss Leola McDonald. We lost an icon. But we will always have her legacy and memories.

One wouldn’t think this one-woman-army — who could pass for anyone’s grandmother — would be the authority for the hottest in rap or slow jam to chill to with you boo that night, but she was music. Everything that came through those doors, she was both aware of and knowledgeable about. She did that for 30 years, mostly on her own. In all the years I went in there, I don’t recall ever seeing her with any help. Seven days a week, she catered to North Omaha’s musical hunger – our own Motormouth Maybell if you will.

Rapper Donnie Hansen sent this to me:

“I was 18 years old (now 33). My girlfriend and I drove down to Omaha from Fremont in search of Pocket Pete & Freddy Dead’s “Praying on my Downfall.” I went to Homer’s and a guy said to try Leola’s on Ames Street. So I drove down there to check it out. At the time, She said she didn’t have any more copies and if she did get more it’d be their new release.

I was extremely disappointed and I was getting ready to walk out when she told me to hold up. I walked back to the counter and she gave me directions to a laundromat on Lake Street and said to try there. I was a little nervous going to a laundromat for a CD, but I went down there. In the back was a kitchen and there was Pocket Pete’s mom who got me fixed up with what I was looking for. I went back and thanked Miss Leola for her help. She was such a wonderful woman.”

When I asked people for their fondest memories of Miss Leola, I wasn’t expecting responses with specific times and interactions. It was acknowledging that this woman and this store had been a part of our culture, our childhood and adulthood. It’s where we got our first concert tickets — for me it was TLC in 1992. It’s where our (North Omaha) musicians could sell their mixtapes before any place else would. It was for us, by us.

The conversation of representation has lately been heavy in the media. There’s a real understanding that it’s hard for individuals to make/reach tangible goals and dreams if they don’t see someone who looks like them, who are of their cultural life story. Leola Mcdonald was a change agent of the highest caliber. This twice-divorced mother, who by every statistic should be doing many other things, was a successful and respected entrepreneur. It’s no coincidence that soon after Leola closed the doors to her store in 2011, Alesia Lester opened Gossip Salon in the same space. It has flourished incredibly since.

When I first started recording music, Leola said something to me I carry with me every day:

“Show them who they can be and they’ll become it.”

[Dominique Morgan is an Omaha-native R&B artist, OEAA board member and community figure. Reach him through HN’s managing editor at andrews@hearnebraska.org]