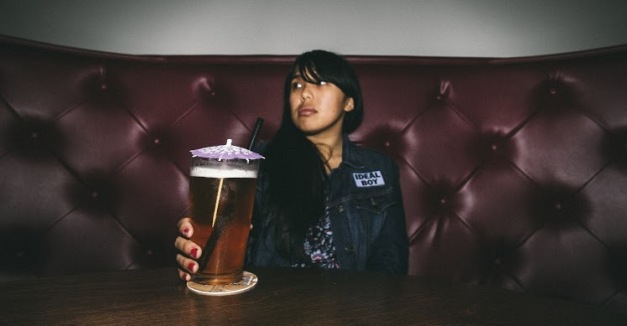 “How about one of these?” Sara Bertuldo asks the Love Drunk cameras before delivering a hammy wink.

In a way, that’s the wink that invisibly precedes most Millions of Boys songs. Certainly, the bouncy Omaha pop punk band trades in sentiment and a good amount of heart, but there’s always a knowing smile to the proceedings: music that says, “I think you’re gonna wanna dance to this song about corpses,” or lyrics that pause for a moment, and then, “Eh, I think I’ll just say this out loud.”

When frontwoman Sara Bertuldo plays “I’ll Have What She’s Having a Baby,” while sitting on the bar at Reverb Lounge, that sense of bleak gamesmanship is there, too. The song addresses widespread anxieties about when to become a parent, chemical feelings that show the years adding up, but adulthood seeming ever-distant. But the execution all happens with a line from When Harry Met Sally and a reference to animal shelter commercials. Wink.

The 126th installment of Love Drunk gives us a chance to hear a Millions of Boys song in an elemental acoustic form, as well as a peek at the chic insides of Reverb Lounge, if you haven’t been yet. Bertuldo, indeed, has, as her other band, See Through Dresses, opened the place with Sebadoh late last month.

Millions of Boys has a new record in the works currently, and plays Slowdown on Oct. 19. Tickets here.

mixed and edited by: